With the price of gold now down nearly 30% from its record September 2011 high of $1,920.30/oz to around $1,377, analysts looking for a commodity to be bullish about have turned their focus to natural gas as a new commodity “safe haven,” thanks to the shale revolution. 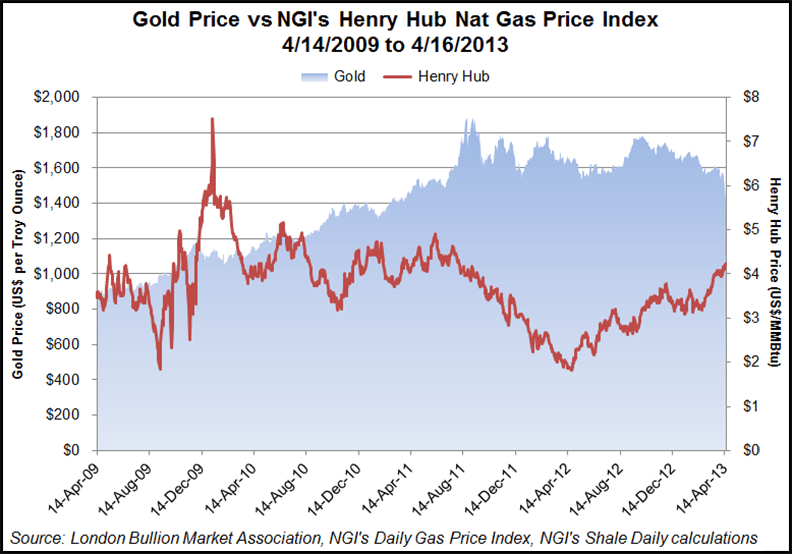 “Over the previous five years the two highest conviction trades in the commodity complex were being long gold in response to the debasing actions of central banks around the world and short natural gas in response to the shale revolution,” the analysts wrote. “These two trends have now likely reversed and our conviction in these new trends has risen significantly over the past month as we have introduced both short gold and long natural gas trading recommendations.”

The Goldman analysts added that these shifts in trends “represent a significant departure from the past decade” and are interrelated. “The shift in gold represents a more confident economic environment where there is a flicker of light at the end of the tunnel to this period of easy money while the shift in natural gas represents the ability for trend natural gas consumption in the U.S. to near 3.0%. This underscores how the shale revolution has helped shape the improving economic environment in the U.S. — making U.S. natural gas and the U.S. economy the new safe haven.”

It’s no secret that analysts at Goldman Sachs are fairly bullish on natural gas prices over the next few years. Analysts with the investment bank recently joined the Energy Information Administration (EIA) and a parade of analysts at Raymond James & Associates Inc., Tudor, Pickering, Holt & Co. Inc., Morgan Stanley, Barclays Capital and Stephen Smith Energy Associates in predicting higher natural gas prices this year (see Shale Daily, April 11; April 9; April 4). The reasons cited by those analysts include the cold end to the 2012-2013 winter and EIA Form 914 data indicating declining production. Analyst price predictions for 2013 have run as high as $4.11/MMBtu in a bull-case forecast.

In a research note earlier this month, Goldman analysts said New York Mercantile Exchange (Nymex) gas prices now are forecast to average $4.40/MMBtu for the rest of 2013, up from a previous prediction of $3.75. “In particular, we now expect prices to average $4.50/MMBtu over the second half of this year, as a return to growing production is required to balance the market after this summer, in our view.”