Physical natural gas for delivery Friday slipped lower in Thursday’s trading, with robust losses in the Northeast as well as softness in Appalachia and the Midwest offsetting modest strength in the Midcontinent, California, and the Rockies. The NGINational Spot Gas Average fell 1 cent to $2.92. 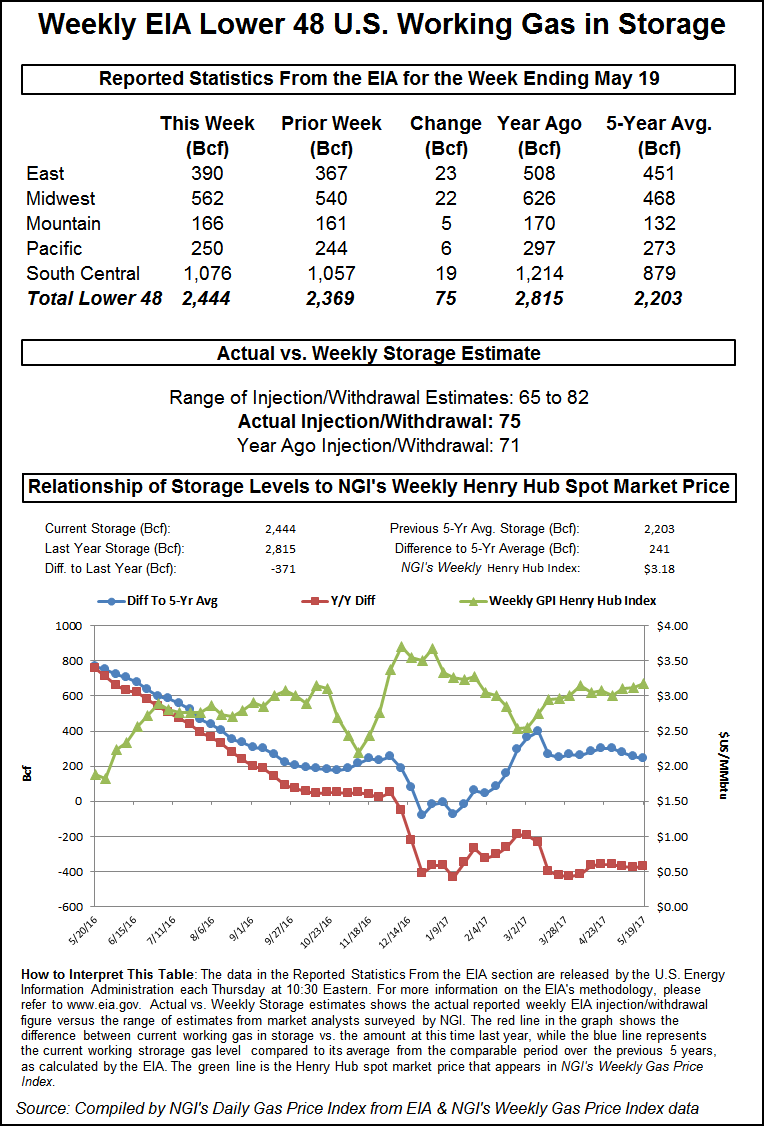 Futures responded to an Energy Information Administration (EIA) storage report showing a 75 Bcf injection for the week ending May 19, about 4 Bcf greater than expectations, by dropping a couple of pennies. At the close June had retreated 2.5 cents to $3.184 and July had shed 2.5 cents as well to $3.275. July crude oil plunged $2.46 to $48.90/bbl following an announcement from OPEC that it would continue to cut supply as U.S. shale production remains robust.

Prior to the report traders were looking for a storage build not far from the actual figures.

Last year 71 Bcf was injected and the five-year average stands at a stout 90 Bcf. ICAP Energy calculated a 74 Bcf injection and IAF Advisors was looking for a 69 Bcf increase. A Reuters survey of 22 traders and analysts showed a sample mean of 71 Bcf with a range of +65 Bcf to +82 Bcf.

The Wells Fargo analytical team in Denver saw the report as bearish, but noted the market remains undersupplied. “The reported figure was 6 Bcf above consensus, 4 Bcf above last year and 16 Bcf below the 5-yr average of 91 Bcf. Based on our storage model this data point indicates that the natural gas markets are still running about 2 Bcf/d undersupplied, and our analysis shows that this state of undersupply will persist throughout the summer.

Market technicians raise the specter of a market peak heading into a seasonal decline.

“Again we ask, are we witnessing the onset of a summer to fall seasonal decline?” asked Brian Larose of United ICAP in closing comments Wednesday. His calculations showed that such a decline would take prices into low $2.00 territory.

Inventories now stand at 2,444 Bcf and are 371 Bcf less than last year and 241 Bcf above the five-year average.

In the East Region, 23 Bcf was injected, and the Midwest Region saw inventories rise by 22 Bcf. Stocks in the Mountain Region were greater by 5 Bcf, and the Pacific Region was up 6 Bcf. The South Central Region increased 19 Bcf.

Physical bulls faced an uphill battle as forecast temperatures in major markets held close to seasonal norms. Wunderground.com predicted Thursday’s high of 55 in Boston would reach 58 on Friday and 61 by Saturday, eight degrees below normal. Philadelphia’s 65 high Thursday was seen rising to 76 Friday and Saturday, 1 degree below normal.