Houston-based Murphy Oil Corp. reported solid results in North America during 4Q2020, but the CEO put them aside Thursday morning, opening a conference call by criticizing President Biden for imposing a federal leasing ban that may impact the independent’s onshore and offshore development. 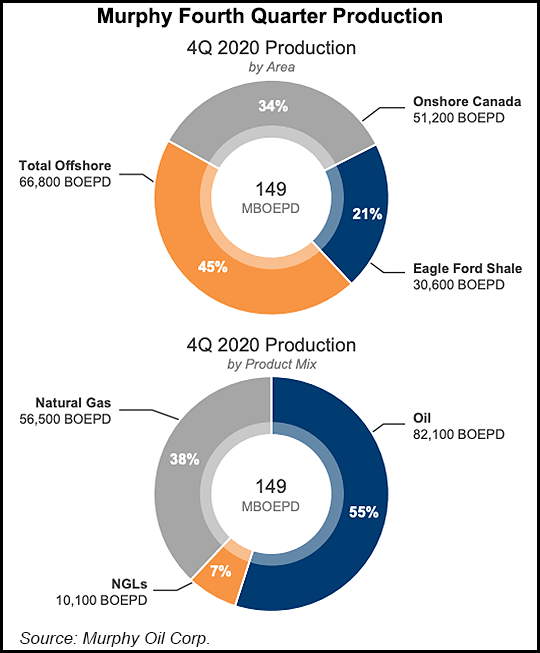 CEO Roger W. Jenkins shared a microphone with his executive team to discuss quarterly results and the forecast for 2021. The independent sanctioned a Montney Shale natural gas development in Western Canada and advanced a bevy of deepwater projects in the Gulf of Mexico (GOM).

However, in his opening comments, Jenkins was no holds barred as he took aim at Biden’s executive action (EO) on Wednesday directing the Department of the Interior to pause new leasing on federal lands and offshore waters.

Murphy Oil is “like all operators” working on federal lands and offshore that “are disappointed,” but “not at all surprised,” Jenkins told analysts and investors.

“As a matter of public policy…the efforts are misguided” if they were taken to combat climate change as greenhouse gas emissions from exploration and production (E&P) activity have been declining steadily across the country for years, he noted.

What the EO does, however, is “punish domestic producers and workers…Ironically, any policy that includes the Gulf of Mexico actually hurts the carbon footprint,” as the deepwater GOM “has the lowest carbon intensity of all of the E&P business…”

Jenkins acknowledged the EO is “not limiting existing operations under valid leases and provides a method for obtaining necessary approvals. There’s the potential for delayed consolidation of approval authority.”

Management has been in “discussions with regulators, and progress has been made in the last week to obtain actual approvals to conduct ongoing operations on current leases. We’ve also seen the past few weeks over 20 approvals given for work in the Gulf of Mexico to not only us but our peers.”

Because “existing and ongoing lease work was not included in the announcement, the administration’s recent actions have confirmed the viability of our company’s strategy and increased the value of our diverse global portfolio.”

While the GOM operations are on federal leases, the Lower 48 developments are spread across mostly private U.S. acreage. Murphy also has a substantial portfolio onshore and offshore Canada, as well as offshore Brazil, Mexico and Vietnam.

“As you can imagine, there are many pieces here moving forward,” Jenkins said. “We expect once the dust settles that permitting approvals will return to a process we can work with. It’s not in the government’s best interest to lose operations in the Gulf for lots of financial and legal reasons.”

In addition, the Biden administration’s “actions are highly likely to increase oil prices, which would be in our favor.”

During the fourth quarter, Murphy moved several “major” GOM projects forward, “with the drilling campaign for Khaleesi, Mormont and Samurai launching early this year, along with drilling meaningful exploration wells in Brazil and Gulf of Mexico,” the CEO said.

In addition, Jenkins touted the value of the Tupper Montney Shale development in Canada, a natural gas play that was sanctioned in the final three months of 2020.

“Over the past few years, we have seen great improvement in all facets of these operations, including reductions in operating expenses and drilling and completions costs, as well as stronger base production performance,” he said. “When coupled with the macro improvements of higher Canadian natural gas prices and production debottlenecking in the area, the Tupper Montney now competes with premiere shale assets in North America.”

Fourth quarter production averaged 149,000 boe/d, 55% weighted to oil and 62% to liquids. Two subsea equipment issues in the GOM took out around 3,700 boe/d during the three-month period, but onshore production offset the loss.

In the North American onshore, production averaged 82,000 boe/d in 4Q2020. Natural gas production from the Tupper Montney was around 234 MMcf/d. In the Eagle Ford Shale, output came in at 31,000 boe/d on average and in the Kaybob Duvernay formation in Western Canada, average production was 10,000 boe/d.

In the Eagle Ford, capital expenditure (capex) is set at $170 million, 17% lower than in 2020. Plans are to drill and bring online 19 operated wells in the Karnes and Catarina acreage, as well as drilling two and bringing online 53 nonoperated wells, primarily in Karnes.

Murphy also is budgeting $75 million to the 2021 exploration program in the GOM, offshore Mexico and Brazil, with most of the capex for drilling.