The U.S. oil and gas industry reacted with dismay and the first of perhaps multiple lawsuits Wednesday ahead of an executive order (EO) by President Biden directing the Department of the Interior (DOI) to pause new oil and natural gas leasing on federal lands and offshore waters. 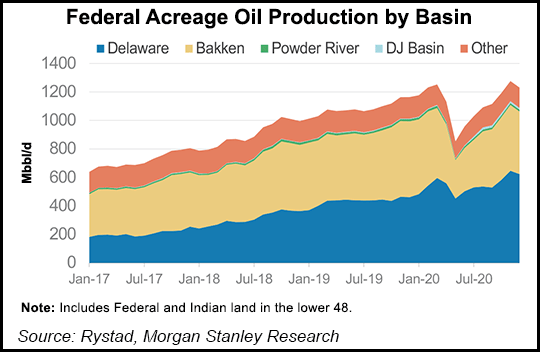 The latest order entails a “targeted pause” that “does not impact existing operations or permits for valid, existing leases, which are continuing to be reviewed and approved,” DOI said. “The order does not restrict energy activities on private or state lands, or lands that the United States holds in trust or restricted status for Tribes or individual Indians.”

Industry stakeholders, however, appeared to take little comfort in these assurances.

The Western Energy Alliance, a regional oil and gas trade group, filed a lawsuit in the U.S. District Court for the District of Wyoming challenging the EO on grounds that it violates the Mineral Leasing Act, National Environmental Policy Act, and the Federal Lands Policy and Management Act.

According to the Alliance, Wyoming ranks No. 1 among the states in federal natural gas production and No. 3 in oil production on federal lands. It also has more federal acres leased than any other state, the group said. The complaint alleges that the administration’s ban on new leasing would cost eight western states $33.5 billion total in economic output and nearly 59,000 jobs annually during Biden’s first term, with Wyoming and New Mexico hit hardest.

“The API legal office…is looking at all of these orders as we do with every other new order out of any administration, and I can assure you that as this process proceeds, we will be pursuing legal angles if necessary,” he said.

Sommers added that the decision “appears to be a first step toward an end goal of stopping natural gas and oil development on federal lands and waters.” That in turn could lead to “increased imports from foreign energy sources, higher emissions in the power sector due to a slower transition away from coal to natural gas, and…hundreds of thousands of lost jobs and billions in government revenue at risk.”

Unlike the 60-day secretarial order, the presumably longer-lasting EO does not affect drilling permits at existing leases.

“Of course we are relieved that the order today doesn’t include permits,” said Sommers.

However, “I think the first-day actions signal that they’re going to continue to look at the permitting process and we’re very concerned about the slowdown of permits for our operators in the fields.”

President Tyler Gray of the Louisiana Mid-Continent Oil and Gas Association said, “It is abundantly clear that banning energy development on federal lands and waters will stifle Louisiana’s economic growth, threaten thousands of high-paying jobs, and undermine our environmental progress.”

Energy sector analysts acknowledged the significance of the president’s executive actions, but they put them in the larger context of the U.S. industry and legal system.

Raymond James & Associates Inc. analysts led by Pavel Molchanov and John Freeman noted that even the 60-day leasing and drilling freeze allows for some exceptions. Wednesday’s EO “has what looks to be a similar loophole,” containing the words, ‘to the extent possible.’ Thus, it is realistic to envision some new leases being granted, albeit it will not be an everyday, business-as-usual occurrence.”

The Raymond James analysts added, “Presumably, permitting on existing leases will be able to resume after the 60-day review.

“While the leasing moratorium may itself invite court challenges, any hypothetical future attempt to effectively stifle drilling on existing acreage by permanently banning new permits would assuredly lead to contentious litigation, which is why we view such a scenario as unlikely.”

ClearView Energy Partners LLC analysts in a note to clients said “EOs can do many things, but they cannot break the law (as the Trump White House discovered).”

The ClearView analysts said while a de facto long-term ban on new federal leases is within President Biden’s grasp, similar action on drilling permits at existing leases would be much more vulnerable to legal challenges.

“This ban will not influence short-term oil prices or even economics” of U.S. oil exploration and production companies, said Rystad CEO Jarand Rystad. However, “it will be very dramatic for suppliers such as seismic companies, rigs and other exploration-driven oil service segments.”

The EO “will provide a chance to review the federal oil and gas program to ensure that it serves the public interest and to restore balance on America’s public lands and waters to benefit current and future generations,” DOI said.

“Multiple bills in Congress have been introduced in recent years to reform the outdated program, including those to better ensure the public is not shut out of land management and leasing decisions; to address the mounting cleanup and remediation costs of orphan wells scattered across the country; and to provide a fair return to taxpayers for the use of their resources,” DOI said.

DOI noted that the industry is sitting on about 7,700 unused, approved permits to drill. About 13.9 million acres, or 53% of onshore acreage under lease to the industry, are unused and non-producing, DOI said.

In the offshore, more than 9.3 million acres, or 77% of the total, are unused and nonproducing.

DOI said the Trump administration “conducted a fire sale of public lands and waters, offering more than 25 million acres onshore during the past four years, 5.6 million of which were purchased.

The EO is to direct the Interior to identify steps to accelerate renewable energy development on public lands and waters, including a goal of doubling power generation from offshore wind by 2030.

DOI also will be instructed to outline steps to achieve Biden’s pledge of conserving at least 30% each of U.S. lands and waters by 2030.

Citing data from the U.S. Geological Survey, DOI said only 12% of U.S. lands are permanently protected.

“Studies show that roughly 23% of America’s ocean is currently strongly protected, with the vast majority of ocean protections found in the western Pacific Ocean,” DOI said. President Biden’s Build Back Better climate agenda aims to put the U.S. on a path to net-zero carbon emissions by 2050.