The Marcellus Shale and Permian Basin remain growth areas for MPLX LP, but the operator plans to put more of an emphasis on “strict” capital and cost discipline going forward as uncertainty regarding the Covid-19 pandemic lingers. 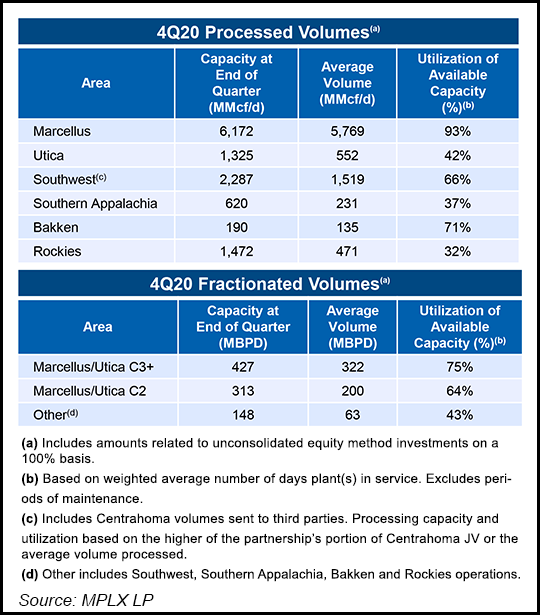 CEO Michael Hennigan said the midstream giant is targeting only $800 million in growth capital spending in 2021, “focusing on projects that achieve robust returns, irrespective of the market environment.”

Speaking to investors Tuesday on the fourth quarter earnings call, Hennigan said the company is “cautiously optimistic” about the level of recovery to be experienced this year in the oil and natural gas industry. There are parameters that would lead market observers to believe the industry is on track for a “recovery that’s robust and quick,” but management is hedging because “what if that’s not the case and how do we see this playing out in case it turns out to be longer?”

The second wave of restrictions occurred in December as the number of Covid-19 cases escalated, Henningan noted. “Hopefully those are going to start to come off, and I know the new administration has a priority to get vaccinations into the people’s arms as quickly as possible, so there’s momentum in the positive side.”

Still, it’s difficult to determine exactly when the virus may be fully under control, “so we’re just going to prepare for both scenarios.”

MPLX said the Permian Wink-to-Webster oil and Whistler natural gas pipelines exemplify the company’s mission of focusing on investments that deliver the most attractive returns. The conduits, expected to be fully in service this year, are backed by long-term minimum volume commitments (MVC) from producer customers. Both projects have multiple joint venture partners that have shared the cost of development.

However, a natural gas liquids (NGL) pipeline in the Permian was scrapped in May amid the collapse in oil prices. Although the 24-inch diameter 500,000 b/d Belvieu Alternative NGL (aka BANGL) pipeline “could have been a long-term winner,” according to Hennigan, the lack of MVCs ultimately was the deciding factor in not moving forward with the project’s original concept.

“We changed that quite a bit down to a much lower capital solution using some existing pipe and partnering with some other players,” he said.

MPLX, the master limited partnership of Marathon Petroleum Corp., is taking a similar approach in the Northeast to optimize processing capacity in the region. CFO Pamela Beall said the partnership has undertaken some pipeline work in the past couple of years that would allow it to shift volumes to a different location.

“We’re not looking necessarily at shuttering any plants, but being able to balance volumes across the system with the investments that we’ve made,” she said. “…The best return that we can get on our capital is filling up the plants we already have in place without allocating capital to do new additions.”

Hennigan added, “We still are very bullish on the Marcellus.”

The Marcellus proved solid for the Gathering and Processing (G&P) segment during the fourth quarter. Processed volumes averaged 5.8 Bcf/d, an 8% increase versus 4Q2019. Fractionated volumes averaged 492,000 b/d in the quarter, up 10% year/year. Gathered volumes, however, were lower, averaging 1.3 Bcf/d, a 4% decrease from 4Q2019.

“In our view, it’s still a very cost effective area for production of natural gas,” Hennigan said. “It doesn’t beat associated [gas] because that’s a different economic. But for on-purpose gas, we’re still believers that know the area that we’re in is a good area. As things continue to develop, we think we’ll find the opportunities to grow earnings there.”

Hennigan said the midstreamer would, at some point, look to optimize its existing portfolio that’s spread across eight basins. However, the market so far “hasn’t been willing to give us the right offer for those other assets that we think maybe belong in someone else’s portfolio.”

The company chief said the assets that could be marketed continue to generate cash, and management is “happy to keep them…As long as we’re still kicking off cash in those areas, we still believe it’s contribution to the enterprise.”

Expectations for natural gas have begun to move toward a positive dynamic, the CEO said, and although MPLX is not projecting the “robust growth” before Covid-19 took hold, a slow growth model is starting to play itself out.

The midstreamer expects to split the expected $800 million capex budget between the G&P and logistics and storage segments. Beall said there could be an opportunity for capex to come in lower than forecast, depending on what transpires in the producer community on both the gas and crude side of the business.

“I think it would be prudent for us to wait and see how that unfolds throughout the year,” but “we’ll continue to look at all those opportunities where maybe we don’t have to spend as much capital as we move forward through the year.”