A permit application filed with the Pennsylvania Department of Environmental Protection (DEP) shows that Chicago-based Invenergy LLC plans to develop one of the state’s largest natural-gas fired power plants proposed to date on 80 acres in the northeast part of the state. 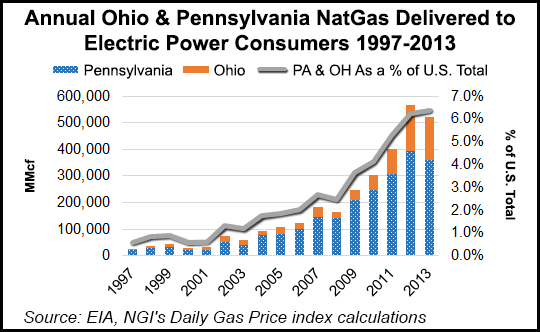 Construction of the plant, which would have a capacity of 1,300 megawatts, is expected to begin this summer and be completed by 2017. It would be located in the borough of Jessup in Lackawanna County and have an interconnect with PPL Electric Utilities Corp.’s Lackawanna Substation in the PJM Interconnection system, which coordinates electricity in 13 states and serves about 60 million people.

PPL Corp.’s PPL Electric serves 1.4 million customers in central and eastern Pennsylvania. The Lackawanna Energy Center, as it would be called, is expected to employ about 30 people once it’s operational.

The location is home to growing volumes of Marcellus Shale dry gas, where there is a backlog of wells awaiting pipeline connections and more regional infrastructure (see Shale Daily, May 5). Pennsylvania has approved about 10 natural-gas fired power plants (see Shale Daily, May 20, 2013), only one of which in Bradford County, owned by the Dallas-based private equity firm Panda Power Funds LP, has broken ground (see Daily GPI, May 16).

That facility is planned to generate 829 MW using locally sourced Marcellus gas. The projects are becoming increasingly important given the U.S. Energy Information Administration’s estimated projections that show coal-fired power will continue to be cut out of the picture through 2020 (see Daily GPI, March 20). PJM itself has said it needs new generating capacity with approximately 20,000 MW of coal-fired power generation slated to be retired within its system by 2016 (see Daily GPI, May 14).

In unrelated news, local news media in southwest Ohio, where far fewer natural gas-fired power plants have been announced, reported that Florida-based NTE Energy LLC is moving forward with plans to construct a 500 MW plant in Middletown, about 40 miles north of Cincinnati. According to reports, plans presented to local officials recently “breezed” through public hearings. That facility will also be within PJM’s system and is expected to be in service by 2018.