With a repeat of the chilly April 2018 temperatures that extended the natural gas storage withdrawal season last year seemingly not in the cards, and with production growth threatening to quickly erase inventory deficits, April bidweek traders locked in natural gas discounts throughout the Lower 48. 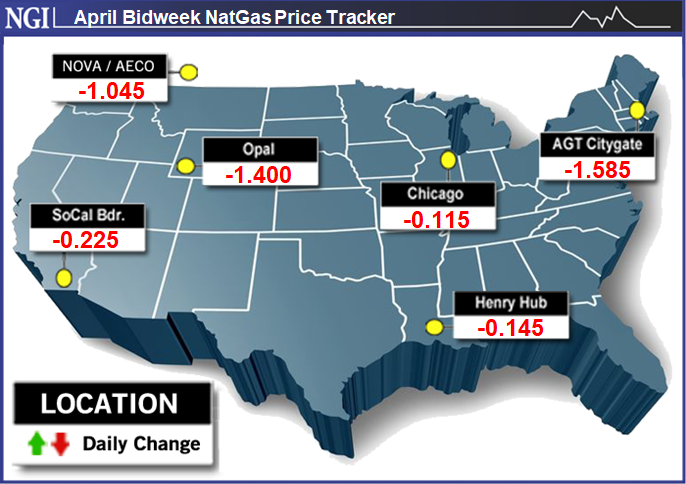 In a sign of the bountiful associated gas supply coming out of the Permian Basin, West Texas prices veered into the negatives, helping steer the NGI Bidweek National Avg. 53.0 cents lower month/month to $2.415/MMBtu. That’s roughly in line with the April 2018 bidweek average of $2.36.

Underwhelming forecasts for the first half of April — a contrast to unseasonable cold in April 2018 — have analysts looking for large injections over the next few weeks.

Given the atypically cold year-ago period, injections are poised to “rapidly” erase the year/year inventory deficit in the weeks ahead, according to EBW Analytics Group CEO Andy Weissman.

“For most of the past year, extremely bullish weather has helped to firm demand despite weak underlying market fundamentals,” Weissman said. “In April, bearish forecasts contrast greatly with last year’s record cold — adding to weather-normalized market weakness. As the deficit is rapidly erased, the bullish argument from low storage inventories is likely to become increasingly tenuous, eroding support and easing Nymex futures lower.”

In what could prove the last withdrawal of the season, the Energy Information Administration (EIA) reported a 36 Bcf withdrawal for the week ended March 22, compared to a five-year average withdrawal of 41 Bcf and a 66 Bcf pull recorded in the year-ago period. That left total Lower 48 working gas in underground storage at 1,107 Bcf as of March 22, 285 Bcf (20.5%) below last year’s stocks and 551 Bcf (33.2%) below the five-year average, according to EIA.

Late-winter cold could have a “continuing impact in averting a deep, prolonged downturn this spring,” according to Weissman, and “stronger long-term prospects” for natural gas demand help to mitigate near-term price weakness.

The April Nymex futures contract rolled off the board at $2.713 Wednesday, down 2.7 cents on the day after trading as low as $2.671. A near-term drop-off in liquefied natural gas (LNG) exports during the week helped pressure prices lower as analysts eyed global price risk for what figures to be a key source of incremental demand growth this year.

“The risk of weak global LNG pricing eroding U.S. feed gas demand is beginning to garner more attention, as LNG pricing and U.S. exports continue to fall,” analysts with Tudor, Pickering, Holt & Co. (TPH) said last week. They pointed to major Asian LNG benchmarks that had closed in the $4.25-4.50 range, “likely putting them out of the money versus Henry Hub at $2.75 plus around $2 in variable/transport costs.”

“The outage is being attributed to opportunistic maintenance that will allow Cheniere to take advantage of down time during weak economic conditions in Europe and Asia,” Genscape analyst Allison Hurley told clients. “As such, aggregate delivery nominations to the terminal have averaged around 2.4 Bcf/d during the outage thus far, remaining roughly 1.4 Bcf/d below the prior two-week average of 3.8 Bcf/d.”

Sabine’s Train 1 and 2 flaring system has been offline since March 23, according to Genscape. “This is notable because this flare system does not regularly shutdown during shorter outage events, which suggests to Genscape analysts that this will likely be an extended outage,” potentially even up to three weeks, Hurley said. “Genscape analysts anticipate the outage will conclude within two to three weeks from the start of the outage on March 20 — with a few days of partial train start-up expected as the systems are tested post-maintenance.”

With LNG feed gas demand underperforming in the near-term, natural gas bulls may have to wait for summer heat to provide an upward price catalyst. Analysts have offered differing outlooks on the potential uplift from power burn in 2019 following the strong growth in natural gas-fired electric generation observed last year.

In a recent note, Morningstar Commodities Research analyst Dan Grunwald said 2019 is shaping up to be another record-breaking year for gas demand in the electric sector.

Booming production has left the market flush with supply and flattened out the shape of the traditional seasonal price curves, but growth in power burns has helped demand keep pace, the analyst said.

“With over 7,000 MW of generation capacity added in 2018 and another 6,500 MW of summer capacity being added this year before summer, we are set for another record-breaking demand season,” Grunwald said. “The added gas capacity and loss of coal in the supply stack should see 2019 demand surpass 2018. If the total added plant capacity ran at 100% this summer, it would add just over 1 Bcf/d. Realistically that will add 0.5-0.75 Bcf/d outside of a very temperate summer.”

Recent Nymex futures prices showed the 2019 summer months trading at a slight discount compared to the same months in 2018 and 2017, Grunwald noted.

“That leaves slight upside potential in a strong demand summer with greater sector reliance on natural gas given coal retirements,” Grunwald said. “Looking at the winter months, last year saw some volatility with tight storage levels, but after a strong start to winter things settled back down. This year the winter curve has flattened again.

“…Storage levels should be bolstered again this spring, but like last year strong summer power demand could see us entering winter again at some of the lowest levels in years.”

On the other hand, analysts with Raymond James & Associates Inc. said they’re not looking for a repeat of last year’s demand performance from the power sector, which they said helped natural gas prices average $3.07/Mcf for 2018 overall, the strongest prices since 2014.

The team of analysts led by Pavel Molchanov and J. Marshall Adkins chalked up the 2018 natural gas price strength to a combination of extreme weather, coal retirements and lower than normal renewable utilization.

“U.S. power demand posted the largest increase in nearly a decade, and natural gas captured the vast majority of the incremental share,” the analysts said. “Going forward, we do not expect a repeat of the 2018 natural gas demand surge anytime soon.

But it’s not the demand side of the market that’s driving the bearish price outlook from the Raymond James team.

“After an exceptional growth year in 2018, U.S. power demand is set to decline in 2019 and then slowly edge up longer-term. More importantly for gas, it will continue to gain share in the electricity mix, albeit not at the unusually strong pace of 2018,” the analysts said. “In addition, gas demand is being bolstered by petrochemical project, pipeline exports to Mexico and the ramp-up of LNG exports.

“Putting all this together, the overall picture for U.S. gas demand is very healthy.” But ignoring production growth would be a “textbook example of an unwise ”one hand clapping’ approach. The healthy demand picture is being overwhelmed by the continuing surge in gas supply.”

What’s more, associated gas growth, primarily from the Permian, has compounded the growth coming from dry gas plays like the Marcellus and Utica shales, according to Raymond James, setting up an inverse relationship between crude oil and gas prices.

“As such, our above-consensus oil price forecast translates into a fundamentally weak outlook for gas prices,” the analysts said. “In addition, we expect a slower pace of coal retirements. Therefore, we expect a significantly looser market this year,” to the tune of 1.6 Bcf/d oversupplied on average. “This equates to nearly an additional 600 Bcf in storage at the end of the injection season.”

Recent natural gas pricing dynamics in West Texas have offered a strong indication of the scope of associated gas growth coming out of the Permian. As bidweek trading got underway, day-ahead prices cratered in the region. On Thursday (March 28), spot market “sellers” in West Texas paid as much as $2.500 to offload their gas, and negative prices were the norm all week.

While analysts have pointed to production growth and limited takeaway capacity as the underlying drivers, an El Paso Natural Gas (EPNG) force majeure limiting westbound flows out of the Permian appeared to catalyze the unprecedented drop-off in Permian pricing.

That incident looked to be largely resolved as of Monday. EPNG notified shippers over the weekend that its Florida Compressor Station Unit 1C had been returned to service, restoring 131,400 Dth/d of roughly 200,000 Dth/d impacted by the event. The Lordsburg Compressor Station Unit 1C was scheduled to return to service Friday (April 5), adding another 58,800 Dth/d of operational capacity, according to the pipeline.

The liquids-rich Permian “does not follow the economic relationships displayed” in dry-gas basins, RBN Energy LLC analyst Jason Ferguson noted recently. “When prices fell below cash variable costs” in the past in plays like the Marcellus, “producers usually shut in gas until new takeaway arrived…

“The Permian is a different animal entirely, with most of the region driven by crude oil economics, a reality that suggests negatively priced gas is merely an added cost that is deducted from a well’s overall profitability. For most Permian oil wells, gas prices would have to fall much further than we have already seen to cause producers to shut in the well.”

With forecasters looking for mild conditions at least through the first half of April, bidweek prices trended lower throughout the country, with markets in the Northeast, Midwest and Gulf Coast all posting double-digit discounts.

In the Midwest, Emerson slumped 37.0 cents to $2.475, while in the Midcontinent Northern Natural Ventura shed 35.0 cents to $2.475. Further East, locations like Algonquin Citygate — down $1.585 to $2.930 — led a wave of steep declines in the region as winter’s last vestiges appeared unlikely to stretch beyond the first few days of April.

In the Rockies, volatility at Northwest Sumas has eased considerably in recent weeks following the record $200 price spike recorded during an extremely cold start to the month of March. For April bidweek, prices at the Pacific Northwest hub fell $7.220 month/month to average $2.645.

“Upcoming planned maintenance on Westcoast Energy could disrupt its southbound flows and tighten supply for the Pacific Northwest,” Genscape analyst Joe Bernardi said late last week. “Station 4B South capacity will be reduced to around 1,150 MMc/f for Monday’s and Tuesday’s gas days (April 1-2). This will represent a decrease of around 190 MMcf/d day/day.”

Meanwhile, an unplanned constraint on Northwest Pipeline could limit flows bound for the Pacific Northwest out of the Rockies.

“Northwest Pipeline announced Thursday that it would be performing unplanned maintenance at its Muddy Creek compressor station, which it anticipates will last through April 12,” Bernardi said. “This work is limiting Muddy Creek northbound flow capacity to 523 MMcf/d, which is about 50 MMcf/d below the past 30-day average.”

While flow cuts into the region coincided with significant price spikes at Northwest Sumas during the winter, “the extent of such pressure has been largely dependent on Pacific Northwest weather-driven demand,” the analyst said. “Genscape meteorologists are forecasting the region will experience very mild, lower-than-seasonally normal HDDs through this maintenance period.”