An open season to gauge support for a pipeline that would transport carbon emissions across five Midwest states for permanent sequestration has drawn enough support that the project could be a go, according to Navigator CO2 Ventures. 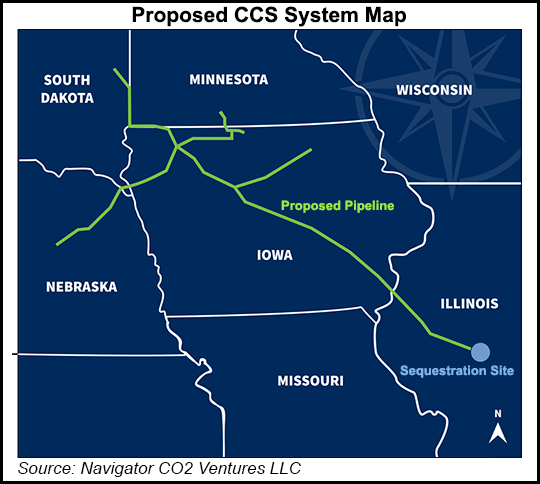 Valero Energy Corp. and a unit of BlackRock Inc. in March teamed up with Navigator Energy Services to develop an industrial-scale pipeline to gather, transport and store carbon dioxide emissions from sites in five Midwest states.

“Based on extensive feedback from potential customers representing diverse emissions sources, and in an effort to provide a holistic solution for multiple industries, Navigator is actively looking to expand the capacity of the pipeline and proceed with multiple sequestration sites, creating an injection capacity of up to 12 million metric tons/year,” Dallas-based Navigator said.

Navigator plans to use the information from the initial open season interest to work with interested shippers on binding commercial agreements. The framework of the agreements would form the basis to consider binding open season.

“This CCS project is one of the first large-scale, commercially viable, carbon pipelines to be developed in the United States,” Navigator noted. “Plans are underway to further expand the scope of the project as needed to accommodate future incremental customer demand.”

If commercial agreements are reached, the CCS project could begin operations in phases by late 2024.