Valero Energy Corp. and a unit of BlackRock Inc. are teaming up with Navigator Energy Services to develop an industrial-scale pipeline to gather, transport and store carbon dioxide (CO2) emissions from sites in five Midwest states. 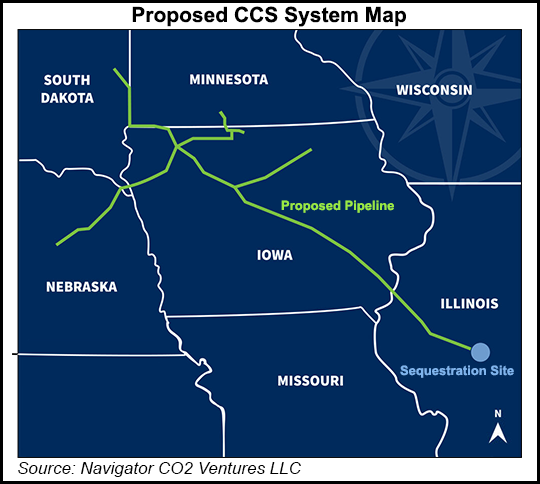 “This project demonstrates our leadership in energy transition through innovation in renewables,” said Valero CEO Joe Gorder. “We continue to expand our long-term competitive advantage with investments to produce lower carbon fuels.”

Valero would anchor the system and is expected to secure most of the initial capacity. It now produces around 1.08 billion gallons/year of ethanol at facilities across the Midwest. The refining and petrochemical giant is considered one of the largest renewable fuels producers in North America.

As designed, the initial system could gather, transport and permanently store up to 5 million metric tons/year (mmty) of CO2. Depending on market support, the pipe could be expanded to transport and sequester up to 8 mmty.

To gauge support, Navigator has launched an open season. Depending on interest, operations could ramp up by late 2024. Navigator plans to work with each counterparty to install or connect the applicable CCS equipment to the pipeline at the various state receipt points.

“Now is the time for industry leading market participants to join forces to complete an environmentally focused midstream project of this size and scale,” Navigator CEO Matt Vining said. “Harnessing our collective resources and strengths will create a unique infrastructure project that changes the way carbon emissions are managed.”

The proposed system would move liquefied CO2 through 6-16-inch diameter pipelines. Where the CO2 would be sequestered is uncertain, but a site is being considered in south-central Illinois. The project would offer biorefineries and other industrial participants “a long-term, economic path to materially reduce their carbon footprint while maximizing the value of their end-product in a cost-effective manner that is safe for the environment” the partners said.

Contact Navigator about the open season, which runs through April 21. Information also is available via email from Chief Commercial Officer Laura McGlothlin, who also may be reached at (214) 880-6003.

“Given the disclosed diameter, we anticipate the system could handle 200,000 b/d,” the analysts said. “We expect the commercial structure to closely resemble traditional midstream long-haul agreements,” with permitting primarily at the state level.