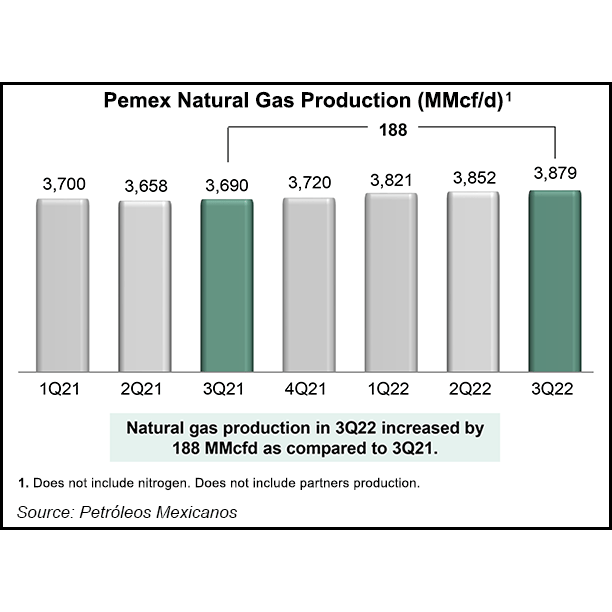 In an earnings call last week, executives tried to put a positive spin on the results. They highlighted that Pemex liquids production hit 1.764 million b/d in the quarter, up by 24,000 b/d year/year.

Executives said that their strategy of focusing on new, so-called priority fields in the onshore and shallow water of the nation’s southeast was paying off, with some 74,000 b/d added on the completion of 15 wells in the third quarter. Another 15 wells are expected to come online in 4Q20222.

The priority fields were producing 402,000 b/d by the end of  September. This figure is slated to hit 522,000 b/d in December, totaling about a third of all Mexico production. This is from zero barrels at the fields in early 2019.

Gas production rose by 189 MMcf/d, or 5.1%, to 3.879 MMcf/d in the third quarter. Natural gas production has shown more momentum than oil, with many of the priority fields showing a high gas to oil ratio. Executives highlighted gassy fields such as Ixachi, Quesqui, Racemosa and Koban. New fields have also been able to come onstream quickly because of access to existing infrastructure.

And yet, Pemex posted a loss of 52 billion pesos, or $2.6 billion, after two straight quarters of profits.

This was during a quarter of record profits in the oil and gas business elsewhere. ExxonMobil’s profits rose to $19.66 billion. Chevron’s net income was $11.2 billion.

Executives blamed the company’s high tax burden. Pemex is the biggest contributor of tax revenue in Mexico. In the first nine months of the year, the company handed over 677 billion pesos to the federal government.

The net loss of $52 billion was lower than the $77 billion net loss in the third quarter last year. Meanwhile, operational costs soared in the period. The cost of sales rose to 476 billion pesos from 268 billion pesos in the year-ago period.

Mexico’s President Andrés Manuel López Obrador has insisted that energy prices for consumers would not rise any higher than inflation.

Pemex has also been meeting all its debt obligations on its own, without any help from the government, executives said.

Although the recently purchased Deer Park refinery in Texas helps improve the company’s refining efficiencies, only around 70,000 b/d of Mexican crude is processed there, executives said. Most of the refined product produced at the refinery is sold outside of Mexico.

Executives said greenhouse gas emissions in exploration and production operations were down 29% for the first nine months of the year versus the comparable period in 2021. Methane emissions were down 17% in the same comparison.

Pemex flared 491 MMcf/d of natural gas in the third quarter, an improvement compared to the 605 MMcf/d flared in the same period last year. However, the figure is the highest quarterly mark so far this year.