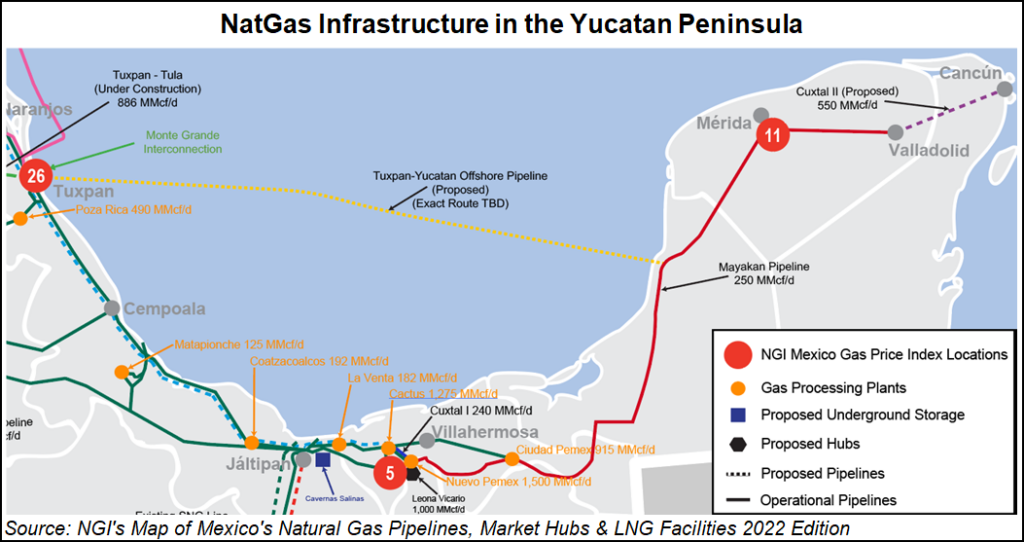 A CFE spokesperson told NGI’s Mexico GPI that the project in question is an expansion of the 2.6 Bcf/d Sur de Texas-Tuxpan offshore pipeline, which is jointly owned by TC Energy Corp. and Infraestructura Energética Nova, aka IEnova.

CFE in August said it had signed a memorandum of understanding (MOU) with TC to develop the expansion project and to seek solutions to complete the stalled Tula-Villa de Reyes and Tuxpan-Tula pipelines. A TC spokesperson confirmed the contents of the MOU to NGI at the time, though it remained unclear as of Monday whether TC would indeed participate in the expansion.

The project will enable the supply of 120-400 MMcf/d on average to the gas-starved peninsula, according to CFE.

“This will allow CFE to transport natural gas from the basins of the southern United States to the Yucatán Peninsula, supplying existing and new power plants in Mérida and Valladolid as well as the new trans-Isthmus pipeline, and providing redundancy and operational flexibility to the Dos Bocas refinery in Tabasco,” CFE said.

The project will contribute to the economic and social development of southeastern Mexico, “with benefits in electricity rates and access to natural gas for the population,” the company added.

The supply deal with New Fortress allows CFE to substitute diesel with cleaner burning natural gas, “reducing the impact of contaminant emissions in the zone.”

Wärtsilä plans to complete the projects in phases during 2022 and 2023.

The projects together represent the largest engineering, procurement and construction contract ever awarded to Wärtsilä, the company said.

“During the summer months the plants will operate continuously, meeting the high electricity demand in the region,” when temperatures can exceed 50 degrees C (122 F).

Wärtsilä has delivered over 500 MW of generating capacity in Mexico to date.