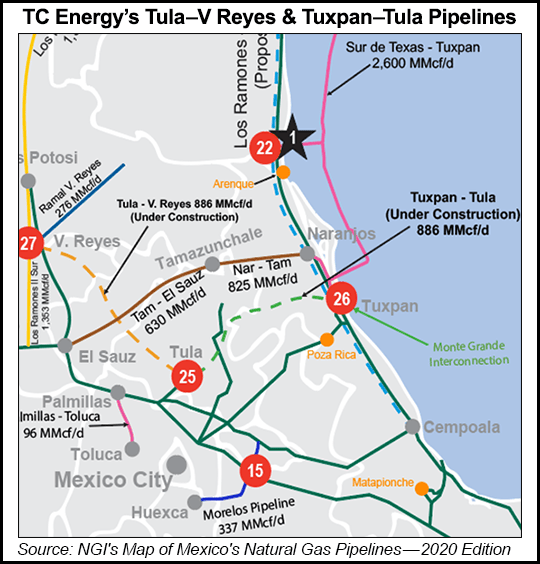 The companies also agreed to jointly work toward developing an offshore natural gas transport system from Tuxpan to the Yucatán Peninsula, CFE said.

CFE has sponsored a massive buildout of Mexico’s natural gas pipeline network over the last decade by private sector firms such as TC Energy and Fermaca in order to secure gas supply from the United States for CFE’s power plants amid stagnant gas production in Mexico.

A TC Energy spokesperson confirmed the latest MOU in an emailed statement to NGI’s Mexico GPI, saying the companies agreed “to seek a mutually beneficial strategic alliance that would enable settlement for outstanding arbitrations on [the] Tula-Villa de Reyes and Tuxpan-Tula pipelines.

“The disputes relate to delays to completion of the pipelines. The alliance may also allow for the completion of the Tuxpan-Tula natural gas pipeline and development of new pipeline projects in the central and southern regions of Mexico.”

The spokesperson said, “The MOU sets the pathway to continue to collaborate with the CFE and negotiate definite agreements that would facilitate the completion of TC Energy’s projects supplying low-cost natural gas to the CFE’s power generation plants in Tula and the Bajío region.

“Through their interconnections, the Tula-Villa de Reyes and Tuxpan-Tula pipelines provide redundancy to gas systems in Central Mexico and a path for natural gas supply to the southeast and the Yucatán peninsula.”

The new offshore pipeline under discussion, meanwhile, aims “to resolve the historical problem of lack of gas supply to southeast Mexico and the Yucatán Peninsula, through a marine system that will go from Tuxpan, Veracruz, and connect with the Mayakán pipeline in the states of Campeche and Tabasco,” CFE said.

“The supply security of this pipeline will give reliability to the electric system and be a motor of development for the Yucatán Peninsula and southeast Mexico.”

TC Energy has said the Tuxpan-Tula project is delayed “due to a lack of progress to successfully complete Indigenous consultation by the Secretary of Energy,” and that project completion is expected about two years after the consultation process is successfully concluded.

CFE said Sunday that completion of Tuxpan-Tula is “fundamental for transporting natural gas from the Gulf of Mexico to the center of the country.”

Construction of Villa de Reyes, meanwhile, “is ongoing but has been delayed due to Covid-19 contingency measures which have impeded our ability to obtain work authorizations as a result of administrative closures,” management said in its 2Q2020 letter to shareholders. “We expect to reach partial in-service by the end of 2021, with the remainder of the construction of Villa de Reyes completed in the first half of 2022.”

The unification of the contracts will result in savings and “additional services” for CFE across TC Energy’s Mexico pipeline system, CFE said, allowing the state-owned firm “to continue guaranteeing energy security and sovereignty for citizens.”

Gadex energy consultant Eduardo Prud’homme said a possible offshore pipeline to the Yucatán region is good news from an operational and energy security perspective, “but it’s bad news for competition, it’s bad for the market we want to design in the gas sector and in the gas market.”

By law, pipelines such as the one proposed by CFE must be procured through a competitive tender, “not by an extension of a contract, and Cenagas must be the entity involved in the tender,” Prud’homme said.