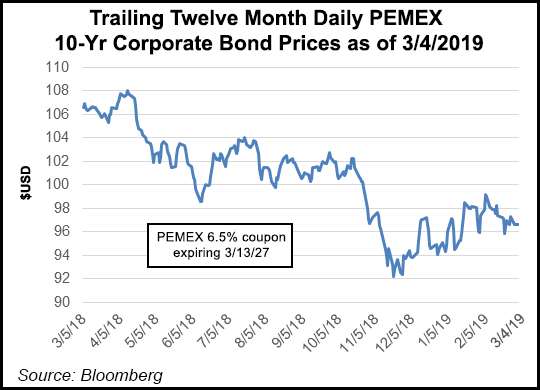 The complexity and scale of the challenge is simply too great for any single operator to tackle, Pimentel said during a presentation last Monday (Feb. 25).

As a result of falling gas output and rising demand, Mexico now imports 92% of the gas it consumes, Pimentel said, with more than 90% of it coming from the United States. This figure excludes gas used by Pemex and other operators for reinjection and other upstream activities.

Under the energy reform, CNH has authorized 111 E&P contracts to 76 firms — 39 Mexican and 37 foreign — that are expected to generate an estimated $143 billion of investment, Pimentel said.

That number pales in comparison, however, to the $630 billion of upstream investment that the International Energy Agency (IEA) estimates Mexico will need by 2040 for output to return to 2004 levels.

“Pemex can’t do it alone,” said Pimentel, who expressed his hope that oil and gas bid rounds will resume after a three-year hiatus recently imposed by President Andrés Manuel López Obrador has concluded.

Analysts and ratings agencies have cited budgetary constraints, immense tax and labor liabilities, and the rapid decline of the Cantarell shallow water mega-field, as factors that have made Pemex the world’s most indebted oil major and hindered its production.

Rather than seeking new exploration and production (E&P) investments from foreign operators as envisioned under the reform, López Obrador has announced a budget increase for Pemex, as well as a series of tax breaks and capital injections to “rescue” the 100% state-owned firm, whose sovereign debt was downgraded to one notch above junk by Fitch Ratings in January.

S&P Global on Monday also revised its global scale rating outlook for Pemex to negative from stable and lowered its stand-alone credit profile (SACP) for Pemex to ”b-” from ”bb-,’ citing “a persistent deterioration of the company’s business and financial risk profiles that has compromised the recovery of its upstream and downstream activities.”

“In addition, we consider that the government’s financial support…falls well short of the company’s multi-annual capital investment needs.”

What’s more, the majority of Mexico’s prospective oil and gas resources are contained in deepwater and unconventional onshore formations, both areas in which Pemex lacks experience.

“Pemex is the world champion in shallow water,” Pimentel said. “Deepwater is a different game. Deepwater is the Formula One of exploration and production activity. [In deepwater] few play, and those who do, play as a team. And we were asking Pemex to do it all; onshore, shallow water, and deepwater. Well in the world, this doesn’t happen.”

López Obrador has also pledged to restore Mexico’s fuel self-sufficiency by upgrading Pemex’s six oil refineries and building a seventh for $8 billion, although the government’s Instituto Mexicano del Petróleo (IMP) has estimated that it could cost upwards of $14 billion.

“Clearly it’s a different energy policy, of that there is no doubt,” Pimentel said. “But for me, the good news is that they haven’t said that the reform will be undone, as they did with [the previous government’s] education reform.”

Pimentel also cited that a farmout tender for operating stakes in seven onshore Pemex blocks remains on the schedule for October 9. A total of 19 firms have formally expressed interest in the auction, which CNH will conduct. Of these, 13 have paid the inscription fee and 11 have begun the prequalification process.

López Obrador indicated earlier in February that the farmout tender could be suspended, but Pimentel said the process “remains alive.”

Of the 111 contracts approved under the reform, 103 were awarded through bid rounds conducted between 2015 and 2018, three are the result of farmout tenders for operating stakes in Pemex acreage, and five pertain to former oilfield services contracts that were migrated to either production sharing or license contracts.