Amid a global energy crunch, Mexico is set to go all in on natural gas with numerous public-private projects announced over the past week. 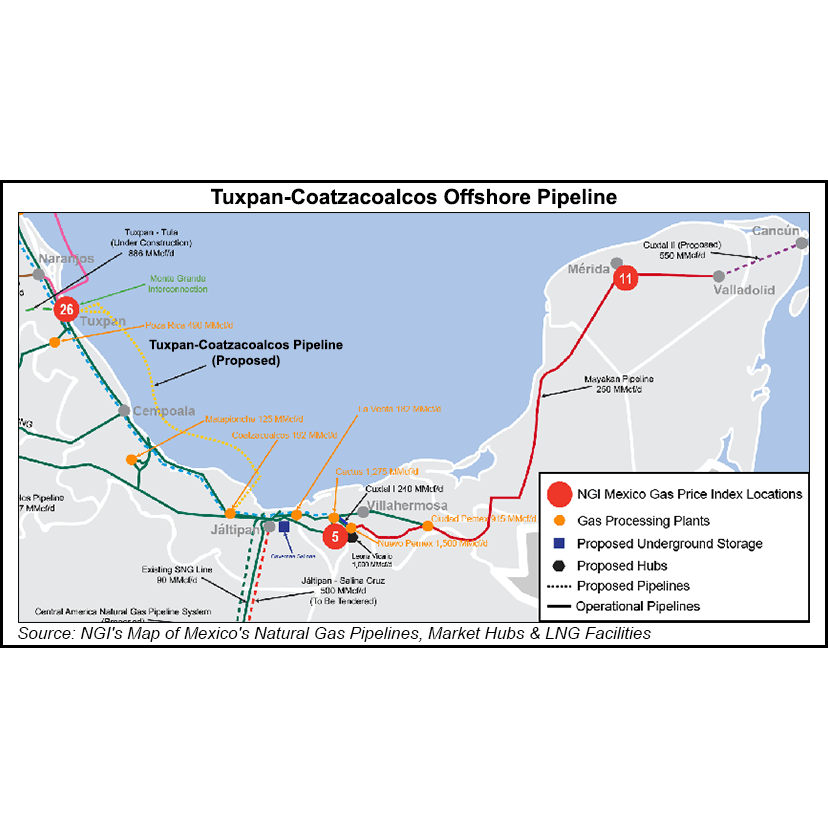 Speaking at the launch of the Olmeca refinery in Dos Bocas, Comisión Federal de Electricidad (CRE) head Manuel Bartlett said the utility would partner with the local subsidiary of Canada’s TC Energy Corp. to develop an extension of the 2.6 Bcf/d Sur de Texas-Tuxpan marine pipeline.

The $5 billion pipeline extension would transport gas from Tuxpan to the port of Coatzacoalcos in Veracruz. Gas could then reach numerous strategic points in Mexico, including a planned liquefaction plant on the Pacific Coast at the port of Salina Cruz, Bartlett said.

CFE would be a partner and co-owner of the marine pipeline extension, Bartlett said. CFE has reportedly also offered a construction contract to a local firm for the 500 MMcf/d pipeline spanning the Tehuantepec Isthmus, from Coatzacoalcos to Salina Cruz.

The marine pipeline extension has been seen as key to providing natural gas both to the Dos Bocas refinery and also to the isolated Yucatán Peninsula. In a press release, CFE officials said the undersea extension would also “resolve the problem” of the Tuxpan-Tula pipeline by offering an alternate route. It would also provide additional supply security to the central regions of the country.

The 886 MMcf/d Tuxpan-Tula has been stalled due to local protests. TC has previously said that another stalled project, the 886 MMcf/d Villa de Reyes pipeline, would enter service later this year. TC’s five fully-owned pipelines transport about 25% of the natural gas consumed in Mexico, and all are underpinned by take-or-pay firm transport agreements with CFE.

Bartlett also said that CFE would bolster natural gas access to another isolated part of the nation, Baja California Sur.  The company would work in conjunction with New Fortress Energy Inc. (NFE).

NFE said it would deploy multiple FLNG units of 1.4 mtpa each. CFE said its partnership with NFE would involve a total investment of $2.2 billion.

While there are numerous LNG projects planned for Mexico’s Pacific Coast, this would be a first in the Gulf of Mexico.

“We are honored to enter into this important strategic partnership that strengthens NFE’s commitment to long-term operations in Mexico and demonstrates the tremendous value of our integrated natural gas infrastructure business model,” said Wes Edens, CEO of NFE.

Pemex has said the Lakach deepwater gas field contains proved and probable resources, i.e. 2P reserves, of close to 1 Tcf. It was discovered in 2008 and saw development halted for budgetary reasons ahead of the 2013-2014 energy reform.