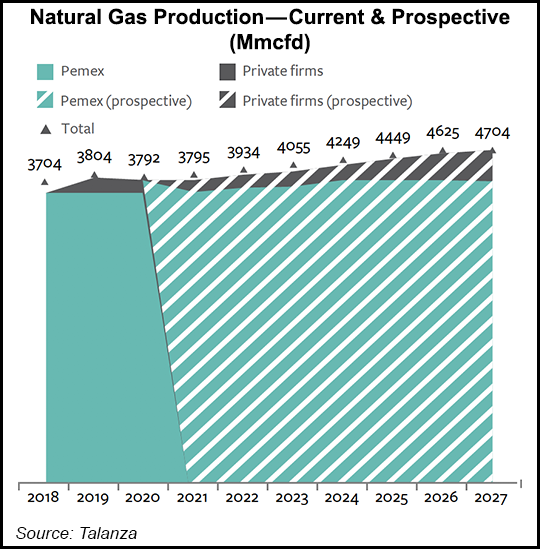 The natural gas market in Mexico is a new opportunity for private sector producers, as firms begin to analyze alternative possibilities, according to a research note from consultancy Talanza.

“Natural gas has become a worldwide commodity, and particularly in Mexico, a scarce one,” Talanza analyst Daniela Flores said. “In that sense, natural gas-producing companies must capitalize on their production and turn it into profit.”

As a result of the opening of the upstream sector as part of the landmark energy reform in 2014, private sector exploration and production (E&P) operators have entered the space in Mexico.

Working in the producers’ favor is that many industries, such as the petrochemical industry, and regions such as the Yucatán Peninsula or Baja California, are dealing with gas shortages, Flores said.

Episode 20: LNG 101 – A Look at the Commercial Structures of U.S. Export Terminals and Why it Matters

Earlier this year, the Mexican government announced a 10-mile interconnection between the Mayakan gas pipeline on the Yucatán and the Sistrangas national pipeline grid.

Mexico’s state-owned power company, Comisión Federal de Electricidad (CFE), and French multinational Engie SA are jointly developing the interconnecting pipeline, known as Cuxtal I, which is to have initial transport capacity of 240 MMcf/d.

As many of the privately operated fields were once Pemex’s, “they maintain — for now — the same agreements, ergo, they have contracts with Pemex E&P, Pemex Logistics, and Pemex Industrial Transformation,” Flores said. However, many firms are now analyzing other allocation possibilities.

Natural gas prices in Mexico, which are highly correlated to prices in the United States because of the Texas imports, are also seen rising.

In its latest Short-Term Energy Outlook, the U.S. Energy Information Administration (EIA) said Henry Hub spot prices should average $1.93/MMBtu in 2020 and $3.10 in 2021.

Of particular interest is the prolific Burgos Basin, which contains an extension of the Eagle Ford Shale in South Texas.

Although Mexican President Andrés Manuel López Obrador publicly opposes drilling using hydraulic fracturing, used to stimulate production from wells, Pemex has been employing the technique for years, and the regulations remain in place.

All new upstream rounds have been cancelled for now in Mexico, but López Obrador has said the government will respect contracts signed by dozens of private E&Ps that won drilling rights during the previous administration.