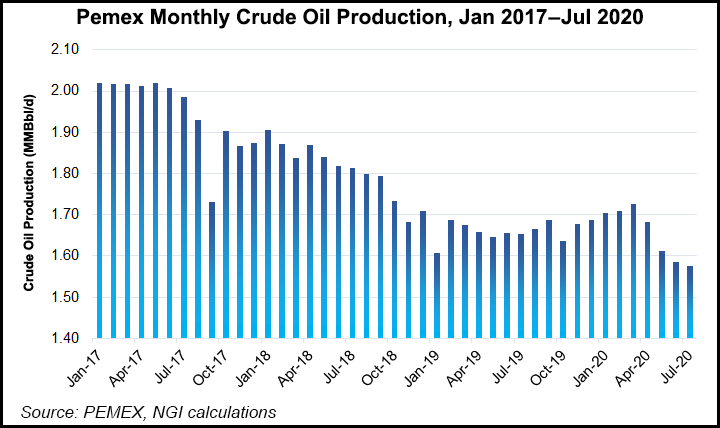 The figure was down from 1.671 million b/d in the comparable period last year.

At the start of 2020, the oil and gas giant had been able to stabilize years of declining production. But despite pushing ahead with exploration and production plans during the worst of the coronavirus, Pemex has now registered four consecutive months of falling crude oil production.

In May and June, Mexico agreed to voluntary slash output by 100,000 b/d as part of a supply-side plan by the Organization of Petroleum Exporting Countries (OPEC) and its allies to steady oil prices in a highly volatile market.

Analysts blame the Pemex figures on the lack of progress at the so-called priority fields outlined in the company business plan last year. There have also been steady declines at older fields such as the once-prolific Cantarell in the Bay of Campeche, which at its peak in 2004 was producing more than 2 million b/d, and today is under 200,000 b/d.

During its second quarter earnings call, Pemex executives said the priority fields were adding 89,000 b/d of additional production as of July, but that planned production gains had been slowed by infrastructure delays, bad weather and “operational problems in well drilling.”

Through the drilling of 119 new wells, the fields were estimated to increase national oil production by 307,000 b/d and gas production by 893 MMcf/d by 2022.

“For Pemex, pretty much nothing has gone according to their plans,” Pablo Zárate, managing director of the Strategic Communications Division of FTI Consulting in Mexico, told NGI’s Mexico GPI.  “Production, which according to the government was supposed to go up by around 300,000 b/d in two years, continues to go down and refining continues to be choppy, with a big hit this month from incidents in three refineries.”

During their two earnings calls this year, Pemex executives have touted stabilizing production, even as Pemex reported a loss of $2 billion in the second quarter and a staggering $23 billion loss in the first.

During the second quarter, the average price of the Mexican oil export mix was $29/bbl, compared with $64/bbl in the same period last year.

As a sign of this, Mexico continues with its upstream plans and had 38 rigs active in July, compared with 37 in July last year.

“The narrative about Pemex is now like a flat tire,” Zarate said. “The government insists on pressing ahead with it. But results are bumpy and are starting to affect not just credibility. There’s stress on public finances and even the economy. Wouldn’t it be better if the narrative changed to one where Pemex, despite all the government’s help, can’t deliver at the level they expected?”

After a recent adjustment, Mexico now aims to hit oil production of 1.8 million b/d this year, with a 100,000 b/d increase every year to reach 2.2 million b/d in 2024, when López Obrador’s term comes to an end.