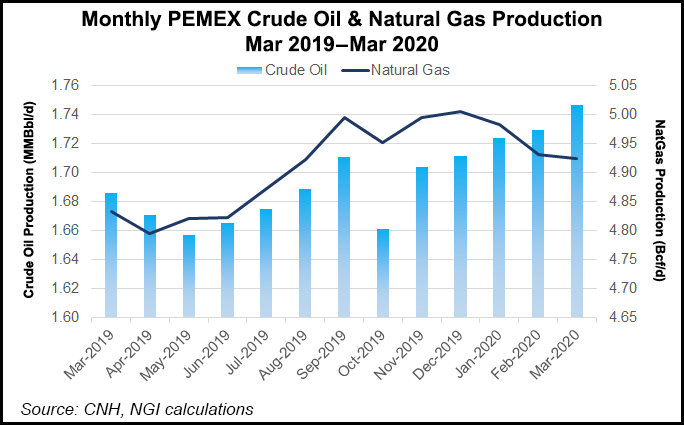 The price was down from $3.15/MMbtu in the year-ago month, according to the Comisión Reguladora de Energía (CRE), an average price that at the time was also a record low.

The IPGN breaks Mexico into six regions, with regions 3 and 5 accounting for the highest volumes traded in April at 1.677 Bcf/d and 1.685 Bcf/d, respectively.

The low prices come amid tremendous uncertainty in natural gas markets, with analysts suggesting U.S. prices rising later this year into 2021 as the economic toll from the coronavirus leads to lower gas production.

Sustained $3-plus prices are likely “in our view, as the oil price collapse is set to drive 5.5 Bcf/d of supply declines” from the end of 2019 to the end of 2020, “putting the market 4-5 Bcf/d undersupplied heading into 2021,” Tudor, Pickering, Holt & Co. analysts said earlier this month.

This would likely translate to an increase in prices in Mexico, as most prices are “really just U.S. prices with a cost element added to move gas from the U.S. to wherever it lands in Mexico,” said NGI’s Patrick Rau, director of strategy and research.

The monthly Henry Hub spot price and the IPGN monthly natural gas price index for example each fell 29% year/year in February, to $1.91/MMBtu and $2.71/MMBtu, respectively.

Gas demand is also being hit in Mexico, with deliveries on the Sistrangas national pipeline system down 10-30% this month as the country’s citizens adhere to stay-at-home measures and industry slows and goes offline.

Mexico’s rise in production comes just weeks after it agreed to curtail oil production by 100,000 b/d in May and June in a global bid to halt falling oil prices.

Prices however have continued to fall. Mexico’s crude oil export basket price, for which the Maya heavy/sour grade is the main component, stood at $8.53 as of Friday, after averaging $56.01 in 2019.

President Andrés Manuel López Obrador, while insisting that Pemex will not cut back on its spending plans for 2020, has said that due to the low-price environment, Mexico will give priority to “the fields where it costs us the least to extract crude.”

This weekend Pemex said that it was taking workers off rigs in the Gulf of Mexico as a means to combat the coronavirus. Some 259 rig workers disembarked at docks in the Ciudad del Carmen on Sunday. The company said that it has 248 confirmed cases of workers across its operations with the virus.