Despite a slight reversal in trend Thursday spurred by a larger than expected injection into U.S. storage inventories, natural gas prices have been on a tear and are at eight-year highs. 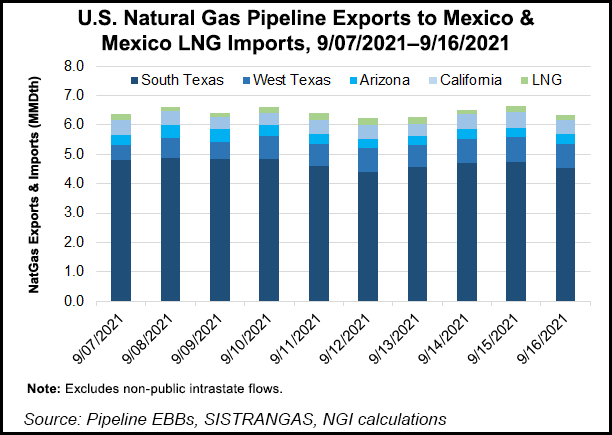 The October New York Mercantile Exchange (Nymex) contract jumped more than 50 cents between Monday and Wednesday, touching new highs for the year on each of the first three days of the week.

Still, the latest price action “may be just the tip of the iceberg as to what’s in store this winter,” NGI’s Price and Markets Editor Leticia Gonzales said during a recent conference. Demand for gas is soaring globally, and U.S. producers are keeping a lid on production. After closing 2019 at around 96 Bcf/d, U.S. output dropped to an average below 91 Bcf/d in 2020 and has held near that level so far in 2021.

The situation is such that some of Europe’s industrial power consumers could face blackouts this winter if natural gas prices climb any higher, analysts with Goldman Sachs Commodities Research warned in a recent note to clients.

“It is all fear in the market, owing to storage levels that are viewed as less than sufficient in the event of a cold winter, not just here in the U.S. but even more so over in Europe,” Bespoke Weather Services said.

That fear has spilled over into Mexico too.

“The market is panicking,” a major gas buyer in Mexico City told NGI’s Mexico GPI. He said most buyers weren’t prepared and didn’t have hedges in place to smooth the increases.

Meanwhile, a trader involved in securing natural gas for a power generation plant said he was worried that power tariffs weren’t reflecting the rise in natural gas prices in Mexico.

Natural gas imports from the United States have remained strong even as the summer has ended in Mexico. NGI’s 10-day average of imports was 6.45 Bcf/d through Thursday.

Mexico’s Sistrangas five-day line pack average was 6.580 Bcf/d on Wednesday, well below the optimal line pack of 6.86-7.29 Bcf needed to guarantee sufficient pressure in the system.

On the Yucatán Peninsula, the cash price at Mérida slipped $6.778 on Thursday, off by 24.6 cents.

After two weeks of withdrawals, the South Central region injected 22 Bcf into storage which included a 13 Bcf injection into nonsalt facilities and an increase of 9 Bcf into salts.