Following a hot summer that fueled robust domestic cooling needs and strong demand for U.S. exports of liquefied natural gas (LNG), Henry Hub prices surged and could climb even higher this winter if the season is exceptionally cold and supplies of gas in storage prove perilously low. 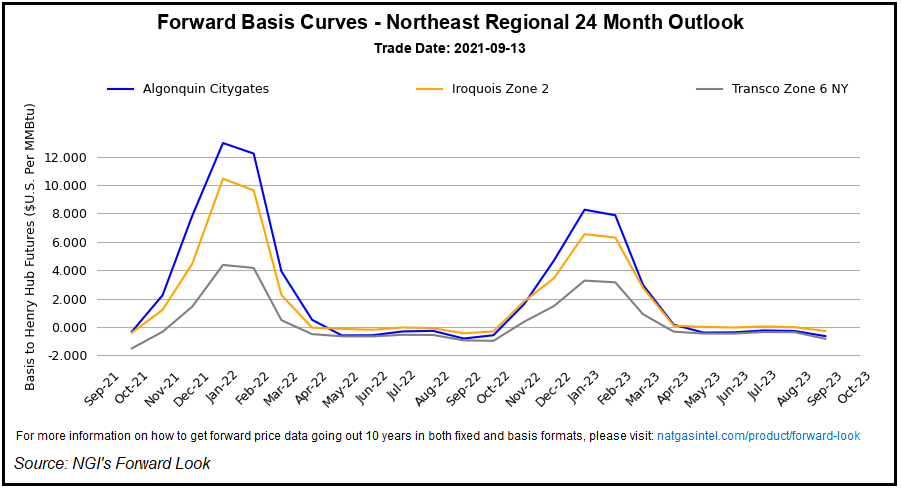 This was a key theme to emerge during a panel discussion at the LDC Gas Forums – Midcontinent on Tuesday in Chicago. NGI’s Price and Markets Editor Leticia Gonzales shared a panel discussion with IHS Markit’s Samuel Andrus, executive director of North American gas.

Natural gas futures on Monday surged to a fresh 2021 high – and the highest level in eight years — as supply/demand balances further intensified alongside a fast-developing hurricane season.

The latest price action “may be just the tip of the iceberg as to what’s in store this winter,” Gonzales said during the LDC event.

Former Hurricane Nicholas, which quickly downgraded after landfall, arrived in the Gulf of Mexico (GOM) on Monday as production in the region was still struggling to come back following the devastation of Hurricane Ida. Ida made landfall in Louisiana on Aug. 29, and more than of the natural gas produced in the GOM pre-Ida remained offline when Nicholas struck Texas late Monday, amplifying already festering output concerns.

Production for two weeks held around or below 90 Bcf in Ida’s wake.

The October Nymex surged 29.3 cents to $5.231/MMBtu on Monday. The prompt month had advanced 5% last week and 8% the previous week, extending upward momentum gathered over the summer.

Demand proved strong throughout the summer months amid scorching heat over much of the Lower 48. At the same time, utilities in Europe and Asia clamored for U.S. LNG because of supply constraints on both continents following a long, cold winter earlier this year followed by a hot summer.

The unyielding overall demand comes as producers are keeping a lid on production. After closing 2019 at around 96 Bcf/d, U.S. output dropped to an average below 91 Bcf/d in 2020 and has held near that level so far in 2021, Andrus said.

The active hurricane season cuts further into already limited supply. Nicholas is the eighth named storm to strike the Lower 48 this year, and it marked the 14th named storm of the season. The number of storms in an average season typically does not reach 14 until November, according to the National Hurricane Center.

In years past, Andrus said, coal would have filled voids left by gas. However, with the United States – and most advanced countries — transitioning to less carbon-intense forms of energy, coal is no longer the reliable backup it once was. That adds to the upward demand pressure on gas. “There’s not a lot of room left for coal,” Andrus said.

The combination of light production and elevated demand has prevented U.S. utilities from injecting average levels of gas into storage to be used during the winter months. This is now fueling concerns about inadequate supplies should the coming winter prove harsh, Gonzales said.

Only about half of what was pulled from storage last year has been refilled to date this year. And the culmination of the typical injection season – the end of October – looms in a matter of weeks. The United States is on track to end October with about 3.4-3.5 Tcf. A year earlier, storage stood at 3.9 Tcf.

Storage injections in a typical week have been below historic norms this year. Last week was no exception.

The U.S. Energy Information Administration’s (EIA) latest data showed utilities injected 52 Bcf natural gas into storage for the week ended Sept. 3. The build lifted inventories to 2,923 Bcf, but that was well below the year-earlier level of 3,515 Bcf and the five-year average of 3,158 Bcf.

Andrus expects U.S. gas production to rise in 2022 and 2023, driven by associated gas that is produced alongside oil. EIA and other forecasters expect global crude demand to reach pre-pandemic levels next year as the world adapts to the coronavirus – largely via vaccines – and major economies are expected to grow, including the United States, China and the European Union. Oil production is expected to increase to meet that demand, and associated gas would rise in tandem.

Still, the increases are likely to come too late for the coming winter. Given that probability, analysts separately at Goldman Sachs and Morgan Stanley have cautioned that natural gas prices could reach $10.00 this winter in order to temper U.S. LNG demand and keep more supplies at home to fuel domestic heating needs.

Gonzales said forecasts for lofty prices are premised on the “precarious” storage situation. “We are setting up for some extreme tightness,” she said.

Spot prices in the West, while volatile, have played a particularly notable role in driving up overall momentum, Gonzales noted.

Heat has dominated the region for months. Hubs in the West also are struggling to meet demand following the rupture of a segment of the El Paso Natural Gas Pipeline (EPNG). The Line 2000 segment near Coolidge, AZ, exploded on Aug. 15. The blast has forced EPNG to restrict Permian flows west into Southwest markets.

In addition, an energy storage facility in Moss Landing, CA, was forced offline last week after it overheated and damaged batteries.