Mexican business chamber Confederación Patronal de la República (Coparmex) has issued a statement warning that Mexican energy policy as outlined in a memorandum from President Andrés Manuel López Obrador to energy sector regulators is damaging to investor confidence at a time when the country desperately needs to jumpstart economic activity. 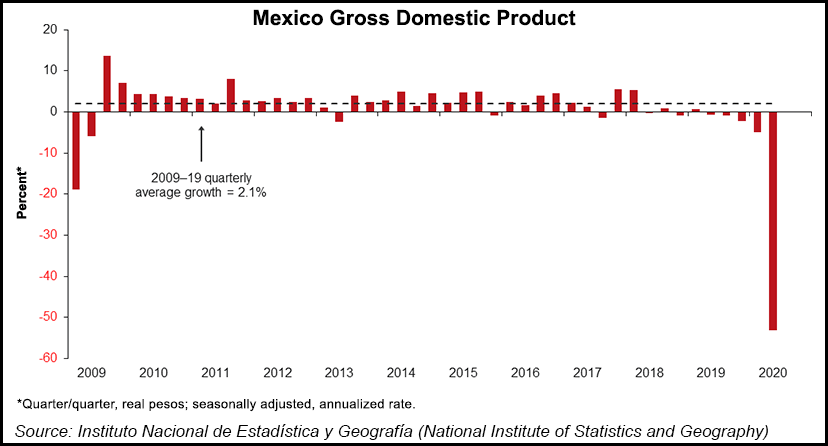 Mexico’s gross domestic product (GDP) contracted an annualized 53.2% in the second quarter of 2020, its largest quarterly drop on record, according to the Federal Reserve Bank of Dallas.

Meanwhile the government of López Obrador appears to be doubling down on an energy sector policy that favors state companies and squeezes out the private sector.

Coparmex represents 36,000 Mexican business entities worth 30% of the country’s GDP, according to the chamber’s website, and has the mission to “contribute to the establishment of the conditions for the prosperity of all Mexicans.”

The authors of the Coparmex statement said that the energy directive as set out in the memorandum “impacts confidence” in the private sector, which has “big investments in the energy sector.”

“Finally, and maybe most importantly,” they added, “if it were to become reality, the memorandum would violate important clauses in commercial treaties that look to protect investment in the country,” which is an overt reference to the U.S.-Mexico-Canada Agreement (USMCA), aka the revamped North American Free Trade Agreement that came into effect on July 1.

“The last thing Mexico needs in an environment as complex as the current one is to get into differences with our principal economic partners,” they said.

Related to this final point, Mexico exports have been hammered by the coronavirus. The three-month moving average of total exports dropped 20.2% in May as oil exports fell 16.9% and manufacturing exports contracted 21.5%, according to Dallas Fed analysts. This year through May, exports fell 21.1% compared with the same period in 2019.

Analysts suggested their forecast of an 8.8% decline in activity this year likely would be revised downward. The International Monetary Fund has projected that Mexico would contract by as much as 10.5% this year.

On Monday, López Obrador during a media briefing spoke of San Diego-based Sempra Energy’s plans to import “the cheapest gas in the world” from Texas to sell through Mexico to Asian markets out of the planned Energía Costa Azul (ECA) liquefied natural gas (LNG) export project in Baja California.

“We have excess gas contracted out, and we need to find a way to use it because we signed these contracts and we need to respect them,” López Obrador said.

Analysts have said that while the president has been critical of the market openings made during the previous administration in Mexico, he has also underlined his government’s respect for existing contracts and the value of the USMCA.

“When he was in Washington recently, López Obrador received the message loud and clear that U.S. companies were worried about their investments,” the Wilson Center’s Duncan Wood told NGI, referring to the Mexican president’s first trip abroad to see President Trump. “He does say he wants to respect contracts. He doesn’t want to violate the rules of USMCA by expropriating companies.”

Market fundamentals also point to a different picture than the one described in the memorandum.

U.S. exports of natural gas to Mexico have lately begun to surge, reaching historic highs at the end of July.

Last week during a conference call, Sempra CEO Jeff Martin said he was confident the company would get the pending export permit for ECA from the Mexican government this quarter.

“There certainly has been some disruption in terms of how the Morena party has been administering the government and its approach to energy generally,” Martin said, referring to López Obrador’s ruling party. But, Martin said, he “had the good fortune of going to dinner with President López Obrador and President Trump” and “there is true warmth and authenticity in that relationship.”