Mexican authorities on Wednesday announced a gradual plan towards reopening the economy starting next week. 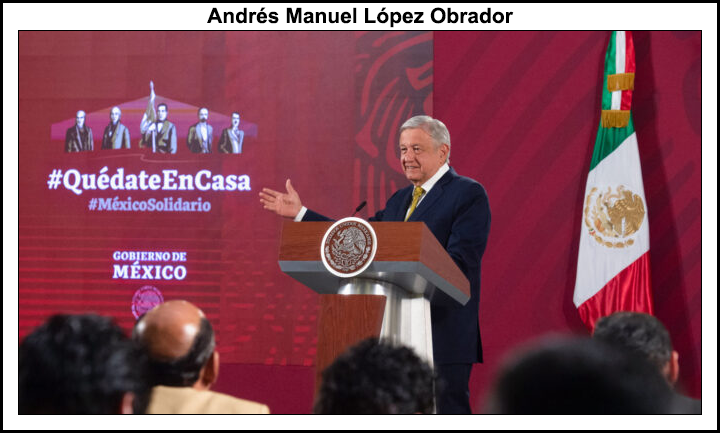 Starting May 18, 269 municipalities in 15 states that have no confirmed coronavirus cases, and that do not border municipalities with infection will be allowed to return to normal activities. ”Sanitary cordons’ will be set up to protect these areas.

In addition, mining, construction and transport manufacturing will be considered essential, and will thus be allowed to also reopen on Monday.

Stage two, from May 18 to June 1, will include ”preparation’ for a safe reopening, during which offices and public spaces will be modified, and trainings on safe daily practices will occur.

And finally, on June 1, economic and social activities will resume in the rest of the country.

The announcement comes as new cases continue to spike in Mexico, and one day after the country reported 353 deaths related to the coronavirus, its highest daily fatality count.

“If there is a municipality or state authority who according to the characteristics of their region, their state, decides that they do not want to follow this plan, there won’t be any controversy, we won’t fight one another, we won’t be divided,” President Andrés Manuel López Obrador said during the press conference.

Nonessential businesses in Mexico have been shut due to the coronavirus since April 1, and the economic projections for Latin America’s second largest economy are being hammered by the lockdown.

“I think it’s great that we have a plan,” the CEO of Monterrey-based Grupo Prodensa Emilio Cadena said during a webinar on North American supply chains organized by Rice University’s Baker Institute for Public Policy. “We can’t finance the shutdown. We have to start opening the economy. We need jobs,” he said.

Cadena argued that the announcement by the Mexican government will allow for the key resumption of supply-chain related economic activity between the United States and Mexico.

Total trade between Mexico and the United States amounted to $615 billion last year, according to the U.S. Census Bureau. Mexico is the top trading partner of the United States, sending some 75% of its exports north.

“The recovery of Mexico will happen because we are so interconnected to the United States,” Cadena said. “It’s good news that we are starting the economy on Monday, with the automotive sector the big driver of that.”

While the full economic toll of the coronavirus is difficult to measure, in the United States current unemployment is estimated to be at about 20%, according to Pia Orrenius, VP and senior economist at the Federal Reserve Bank of Dallas.

She said during the webinar that there remains hope “for a quick recovery” starting in the third quarter in the United States, but in Mexico the picture is bleaker.

“The economy [in Mexico] was shrinking before the pandemic,” Orrenius said. “And in Mexico we are also seeing a very limited policy response. They don’t have the fiscal firepower that the United States has.”

Gross domestic product fell 6.2% in Mexico in the first quarter after stagnating in 2019, with a steeper decline predicted for the second quarter. Meanwhile, the oil price collapse is hammering revenues at state oil giant Petróleos Mexicanos (Pemex).

There is a “middle way” between health and livelihoods, she said. “Hopefully we will find our way there.”

Mexico had 38,234 confirmed cases of coronavirus, with 3,926 deaths as of Wednesday, according to Johns Hopkins University.