After a meaningful step higher over the past week or so, natural gas futures steadied a bit on Tuesday and traded in a tight range. Small deviations in supply and demand ultimately sent the May Nymex contract down 2.2 cents to settle at $2.727, while the June contract slipped 1.5 cents to $2.803. 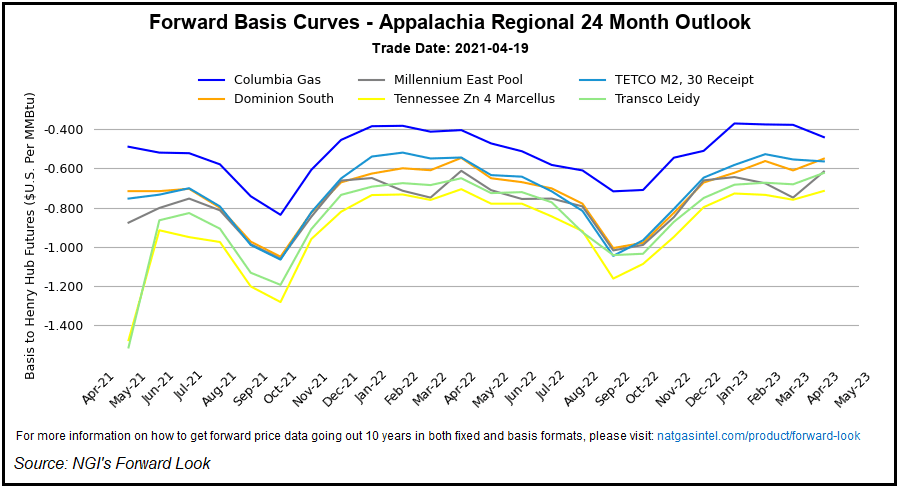 Spot gas prices were higher on Tuesday, with gains finally catching on across the East amid the colder outlook for the week. NGI’s Spot Gas National Avg. climbed 6.0 cents to $2.650.

Though fluctuations in weather don’t often matter much this time of the year, the latest models continued to show stronger-than-normal national demand through the weekend as a series of chilly weather systems sweep across the country, according to NatGasWeather. These cold weather systems are forecast to drop overnight temperatures into the 20s to lower 40s.

However, major weather models also favor a more seasonal pattern over the United States April 27-May 2, which would keep daytime highs “comfortable” in the 60s to 80s. The forecaster said some areas in the Southwest and into Texas could see highs reach the 90s, but demand overall should fall to more seasonal levels.

“Essentially, as heating degree days fade across the northern U.S. in late April and early May, cooling degree days will increase over the southern U.S. to be the dominant driver of national demand as highs of upper 80s to 90s gain in territory, typical of mid-spring,” NatGasWeather said.

After Monday’s 6.9-cent jump, Bespoke Weather Services said Tuesday’s modest retracement in prompt-month prices wasn’t surprising. “We have been thinking the $2.75 level should offer resistance, at least until we see what impact, if any, the move higher in prices has on the supply/demand balance.”

Production was lower again in Bespoke’s preliminary data, down to slightly under 88 Bcf because of spring maintenance. Liquefied natural gas (LNG) feed gas volumes were a bit lower as well, under 11.5 Bcf. Power burns remain weak, though this has been a consistent theme for weeks now, but has been negated by strong exports.

“In short, the $2.70-2.75 range feels fair to us, in the near term,” Bespoke said. “If we do not see any loosening in balances, however, the door opens for another leg higher, based on what we are seeing in our longer-term storage modeling.”

Energy Aspects said its weekly supply-demand balances pointed to an end-April carryout about 20 Bcf lower compared to the March report. Looking ahead to May, the firm said there were some initial signs that balances could loosen, particularly as mild weather and strong wind output have trimmed its estimate of early-injection season power burn.

“Granted, that preliminary adjudication on looseness comes with risk — as in any injection season,” the firm said.

Production could underperform Energy Aspects’ assumption of a slight 0.2 Bcf/d month/month decline in May, particularly if Appalachian maintenance could evolve and result in heavier restrictions to production next month.

Mexican trade could also outperform Energy Aspects’ March estimate of 6.1 Bcf/d in May. Recent daily flow readings suggest Mexican cross-border flows could verify above 7.0 Bcf/d, but a preliminary investigation indicates accountable growth is likely closer to 0.5-0.6 Bcf/d from baseline, rather than more than 1.0 Bcf/d.

“Ultimately, how tight or loose balances skew will depend on if hot weather materialises next month as well,” Energy Aspects said.

If Mexican flows were to realize closer to 6.4-6.5 Bcf/d on average, the firm’s end-May carryout would be shaved by 10-15 Bcf, a level insufficient to lead to a price revision on its own.

Meanwhile, Energy Aspects expects total Lower 48 production to decline only modestly in May as completions-driven production from Eagle Ford Shale and the Permian Basin ramp up and help to offset planned work on the Transcontinental Gas Pipe Line Co. (aka Transco) interconnect with the Leidy Line. The firm estimated 0.70-0.75 Bcf/d of Northeast Pennsylvania (NEPA) production could be curtailed next month, with the largest impact on the Leidy-Dominion interconnect.

“This maintenance event also has the potential to slow injection rates into Dominion storage fields and should cause Leidy basis volatility,” Energy Aspects said. “Production will likely shut in as operators in constrained NEPA have limited re-routing optionality, unlike their Southwest Marcellus/Utica counterparts.”

Furthermore, the Transco maintenance has the potential to curtail Cove Point LNG feed gas, according to the firm. However, the details of the maintenance work — and therefore the precise impact to LNG feed gas in May — remained unclear.

NGI’s Forward Look price data shows that prices in Appalachia are under pressure in May. Transco Leidy May fixed prices sat at $1.234 as of Monday, off 7.0 cents from last Thursday (April 15). However, June forward prices climbed 5.0 cents to $1.953, and the balance of summer (May-October) picked up 2.0 cents to average $1.790.

“Our six-week forward balances indicate an end-May carryout near 2.42 Tcf,” Energy Aspects said. “That would take our end-October carryout to 3.58 Tcf under our current price deck of $2.79 for the injection season.”

Cash prices continued to rise Tuesday across most of the country, with East Coast markets also joining in on the rally as winter weather is set to return to the region.

AccuWeather said Old Man Winter had already taken the stage for his wintry encore. A storm and associated cold front that blanketed much of the Rockies with snow through Monday night began to track farther east Tuesday. A swath of snow was seen ultimately stretching from the central Plains through portions of the Great Lakes and into the Northeast.

As snow spreads farther east, so too would a “punch” of much colder air, according to AccuWeather. Arctic air that brought temperatures crashing down across the Rockies and north-central U.S. to begin the week will send temperatures tumbling throughout the Plains and Great Lakes. Portions of northern Ohio, far northwestern Pennsylvania, western New York and the Lake Erie shoreline of Ontario, Canada, are areas AccuWeather forecasters point to as at the greatest risk for higher snow totals through early Wednesday. Through Wednesday night, snow would spread across more of the Northeast.

“Generally, the greatest snowfall totals from this storm are forecast to occur for the highest elevations of upstate New York, portions of Maine, and into Canada, including parts of southern Quebec,” AccuWeather said.

Generally, temperatures are expected to be between 10 degrees and 20 degrees below normal from Wednesday to Friday, according to the forecaster. Even areas from the Gulf Coast and Southeast up to the mid-Atlantic will feel the chill from midweek into the weekend.

Gains continued in the country’s midsection. Chicago Citygate cash prices tacked on another 8.0 cents to $2.810, while NGPL Midcontinent added 7.5 cents to $2.655.

Spot gas was mostly stronger in the Rockies, where Northwest Wyoming Pool climbed 7.5 cents to $2.675. In California, SoCal Citygate jumped 12.0 cents to $3.425.