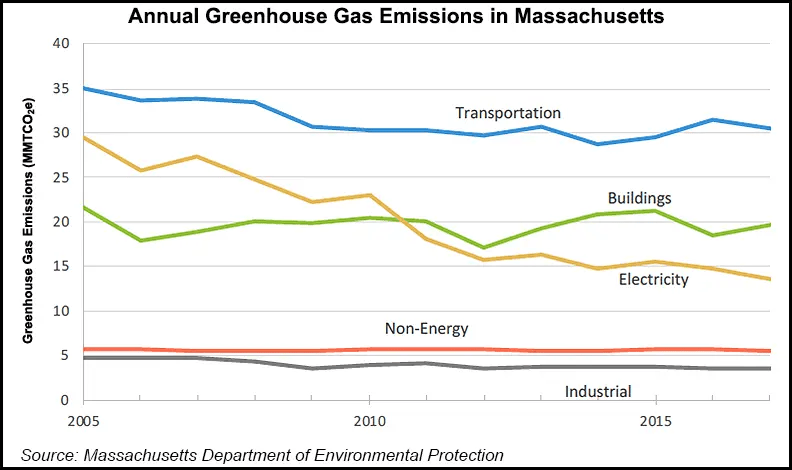 “Climate change is an urgent challenge that requires action, and this legislation will reduce emissions in Massachusetts for decades to come while also ensuring the commonwealth remains economically competitive,” Baker said.

The new law, which passed after months of back and forth between the Republican governor and the Democratic legislature, establishes interim goals for emissions reductions, authorizes a voluntary energy efficient building code for municipalities and allows the state to procure an additional 2,400 MW of offshore wind energy by 2027.

“Cities and towns across Massachusetts continue to face increasingly severe impacts from climate change, and the commonwealth is answering the call for ambitious climate action,” said Lt. Gov. Karyn Polito.

Beyond committing Massachusetts to achieve net zero emissions in 2050, the legislation authorizes the state’s Secretary of Energy and Environmental Affairs (EEA) to establish an emissions limit of no less than 50% below 1990 levels for 2030, and no less than 75% for 2040.

The legislation also authorizes EEA to establish emissions limits every five years, and sublimits for at least six economic sectors including electric power and natural gas distribution and service.

The law also establishes climate change as an “environmental burden” and requires evaluations of new projects to include assessments of historic environmental pollution in the project’s community along with potential new impacts.

A roadmap report released by the Baker-Polito administration at the end of last year found that “the most cost-effective, low-risk pathways to net zero share core elements, including a balanced clean energy portfolio anchored by a significant offshore wind resource, more interstate transmission, widespread electrification of transportation and building heat, and reducing costs by taking action at the point of replacement for energy infrastructure.”

The report added that achieving net zero emissions “will deliver significant benefits to residents across the commonwealth, including a precipitous drop in air pollution, particularly in environmental justice communities currently overburdened with poor air quality; savings in health costs of up to $100 million per year by 2030; and the creation of thousands of high-quality local jobs.”

With the legislation, Massachusetts joins a handful of other states in setting ambitious climate targets. California and Washington have set a goal of 2045 to be carbon neutral, while President Biden has established a nationwide goal of a carbon emissions free power sector by 2035 and a carbon neutral economy by 2050.