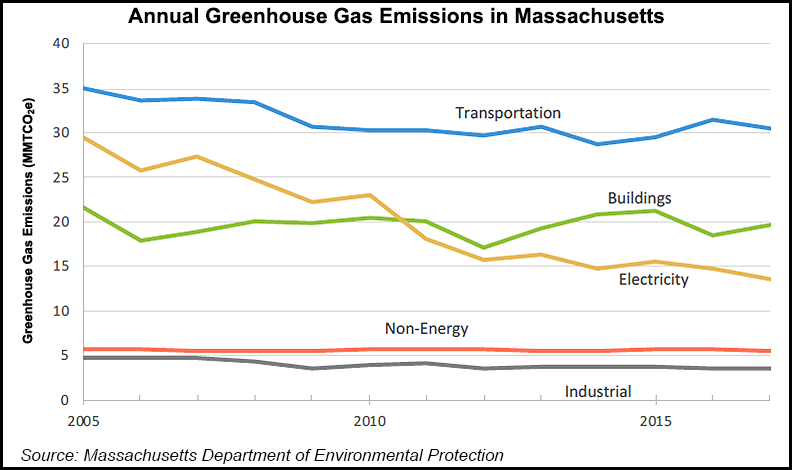 One of the major goals of the legislation was to ban the sale of new gasoline-powered vehicles by 2035 and transition to battery, fuel cell and plug-in hybrid electric vehicles.

The bill also covered future management of forests and soil, as it would have added 100,000 acres over the next 10 years to develop practice-based forest resilience and a carbon storage program.

The ambitious aspects of the bill came down to its deadlines on carbon emissions. The state lawmakers had passed the bill to reduce carbon emissions in 2030 by 50% below 1990 levels, then falling to 75% below those levels by 2040, and by 100% in 2050. Baker said the 50% target would spike costs for electricity ratepayers by $6 billion.

Baker instead is proposing a 45% reduction in carbon emissions by 2030.

The governor also said the bill as passed by legislators left out any concrete commitment to scaling renewable energy except for wind. Other states have distinct plans to reach 100% alternative energy, but Massachusetts is said to have only made significant progress enacting wind energy legislation.

The scuttled legislation may be reintroduced, and Democratic legislators have pledged to renegotiate with Baker.

“Should he not take this important step, the Senate and House are united in our intention to refile and pass the conference committee bill in its entirety and get it onto the governor’s desk in the coming days,” state Senate President Karen Spilka and House Speaker Ronald Mariano jointly said.

Environmental groups are pushing for an alternative energy bill to be enacted.

“While the bill was never a complete picture, it was far and away more than we have,” said Vote Solar’s Stephan Roundtree Jr., Northeast director of the advocacy group. “We now urge the legislature to act on their stated intent to refile and pass the bill immediately in the new session.”

Solar Energy Industries Associations’ Dave Gahl, who heads Northeast state affairs, said, “At some point, we’re going to need a more comprehensive effort to help ensure all these clean energy technologies are working in sync to achieve that big goal.

“I would look at this as a sort of down payment on a broader energy transition that’s going to have to take place to reach these goals.”