Options to address New England’s natural gas capacity demand and other options to address the region’s electricity reliability needs through 2030 will be the focus of a study announced Monday by Massachusetts Attorney General (AG) Maura Healey. 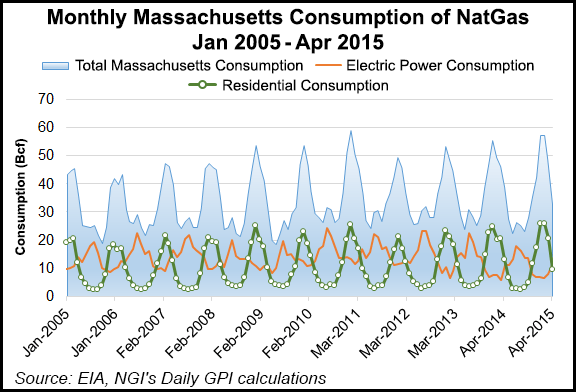 “Our goal with this study is to identify the most cost-effective solutions for ratepayers that will also allow us to achieve our regional climate goals,” Healey said. “As the state makes long-term decisions about additional gas capacity investments, we should understand the facts — what the future demand is, and which cost-effective energy and efficiency resources can be deployed to meet that demand.”

“A key focus of the study will be the question of whether more natural gas is needed in the region, and if so, how much more capacity is needed,” the AG’s office said.

“…While there have been a number of prior studies conducted, none have answered the precise question of how much additional gas is needed in the New England region and whether that gas can by supplied by LNG or additional pipeline capacity is needed.”

The study, which will be made with the support the Barr Foundation and conducted by Analysis Group, a Boston-based economic and financial consulting firm, is scheduled to be completed by October.

In April, the state’s Department of Public Utilities (DPU) opened its owninvestigation into the means by which gas delivery capacity might be added to the New England market. Healey has called on DPU to study capacity needs before making any decisions regarding natural gas pipelines. This week, she asked DPU to reconsider its recent denial of her motion to stay DPU approval of certain local gas distribution companies’ proposed contracts to purchase capacity on Tennessee Gas Pipeline Co. LLC’s (TGP) proposed Northeast Energy Direct (NED) project.

FERC staff are preparing an environmental impact statement for the NED project, which would be capable of moving 2.2 Bcf/d of natural gas to markets in the northeastern United States and Canada (see Daily GPI, July 7). It is intended to take advantage of abundant gas supplies in Appalachia to supply power generators and local distribution companies in the New England states, which have suffered from supply curtailments and price spikes, particularly during winter months. The market path would include 188 miles of pipeline from Wright, NY to Massachusetts and New Hampshire, ending in Dracut, MA. Last month, TGP, a Kinder Morgan Inc. pipeline, told the Federal Energy Regulatory Commission it was dropping two laterals from the project; it was previously expected to have nine (see Daily GPI, June 4a).

Massachusetts needs more pipeline capacity, at least according to a recent study. An analysis of eight different scenarios indicated that through 2019 “electric generators have insufficient supply of natural gas, which results in spiking natural gas prices,” according to the report (see Daily GPI, Jan. 12).

On the other hand, consumption of natural gas for electricity production may not be the source of strong winter demand. According to data from the EIA, residential consumption has made up the brunt of the winter demand increase over at least the last 10 years (see chart).

“In fact, natural gas deliveries to electric power consumers tends to decline to its lowest levels from November to March in contrast to residential and total state consumption, which spike during the winter months,” said NGI markets analyst Nathan Harrison. “This trend is evidenced by a correlation coefficient of negative 0.52 between monthly total Massachusetts natgas consumption and deliveries of natgas to electric power consumers in the state from January 2005 through April 2015. It seems fair to say that residential consumption would be more related to these winter demand spikes showing a correlation coefficient of positive 0.96 over the same period.”