Roughly a year after CME Group launched its U.S. liquefied natural gas (LNG) futures contract, the first ever available in the world for physical LNG delivery, it has yet to trade as the spot market continues to evolve and global players have long been slow to adopt new financial tools in their deals. 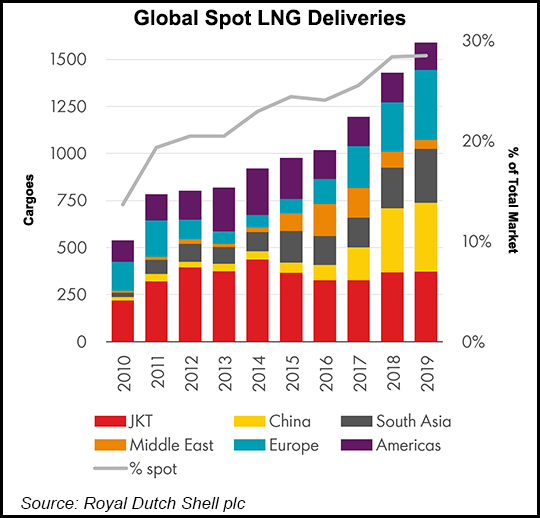 Developing a futures contract is a complex process that involves a wide variety of stakeholders and market input. It often takes time for trading volume to grow, particularly in the LNG market, which for decades has been dominated by rigid long-term deals that have only recently given way to more spot transactions as new buyers and sellers have entered the market. The Covid-19 pandemic has also impacted global natural gas trade.

“All I would point out here is that LNG is a developing market and it takes time for volume to build,” CME Group spokesman Donal McCarthy told NGI.

Listed on the New York Mercantile Exchange, the U.S. LNG Export futures contract was launched in October 2019. Participants would take delivery at Cheniere Energy Inc.’s Sabine Pass export terminal in Louisiana. Additional Gulf Coast terminals, such as Freeport LNG, would be included in the future. Unlike other LNG futures contracts that are currently available, the CME contract allows buyers and sellers to lock in a certain price for either physical delivery or the cash position when the contract settles each month.

The world’s most widely traded LNG futures contract, the Japan Korea Marker (JKM), is only a cash-settled contract.

“The potential for this is great because you don’t really have physical settlement in other LNG futures contracts right now,” said Pareto Commodities’ Brad Hitch, head of LNG. “One could argue that it’s a missing component of indexation. It’s a missing component of the market today that some of the other contracts don’t have physical settlement in them.”

LNG is bought and sold on a wide variety of prices and terms across the globe and has no single benchmark to unify it in a way that Brent does for the crude oil markets. In the Atlantic Basin, a physically settled contract that’s regularly traded would not only allow buyers and sellers to have a better idea of what LNG is worth each day, but it would also better reflect transactions in the spot market.

[Wondering what the price of U.S. LNG is? Check out NGI’s Gulf Coast pricing.]

Stronger derivatives markets often spur more spot trading, which in turn enhances price transparency as more traders participate in the market and the formation of prices.

Cheniere, the largest U.S. LNG exporter, participated in the development of the contract. At the time it was launched, the company’s Chief Commercial Officer Anatol Feygin said it would allow for enhanced short-term price discovery and risk management in the Gulf Coast market.

For now, hurdles remain for CME’s contract as the global LNG market continues to evolve.

The size of the CME contract is 10,000 MMBtu. But it requires that anyone wanting to take delivery of physical volumes has to buy enough contracts to cover an entire LNG cargo. Most vessels carry roughly 3 Bcf of natural gas.

Another factor that’s likely holding the contract back is shipping from the Gulf Coast. LNG in the United States is largely sold on a free-on-board (FOB) basis, meaning ownership of the LNG is transferred to the buyers at the time it is loaded onto a ship at the terminal and they assume shipping costs. That allows buyers to retain destination flexibility over their cargoes, but U.S. FOB prices like those that would factor into CME’s contract don’t include shipping costs.

“I would say to be able to manage your full exposure as a buyer/consumer of gas, you need to be able to hedge the shipping component too,” said Melissa Lindsay, a London-based LNG broker. “FOB indexes don’t factor in the shipping, so you are separately still exposed to freight levels impacting the delivered prices. So, for FOB indexes to build in liquidity, you need to also have liquidity in the freight derivatives.”

CME’s LNG freight futures contracts have traded, but they haven’t traded enough yet to reliably hedge an entire cargo, Lindsay told NGI. The freight contracts  are based on assessments that the Baltic Exchange, a London-based market for trading and settling physical and derivative shipping contracts, began offering last year.

“Ultimately, what people want is a reference price for spot trades in the Atlantic Basin,” Lindsay said of the potential for CME’s LNG futures contract. Lindsay launched Emsurge last year, an online platform to facilitate the buying and selling of LNG and boost price transparency.

She said there’s a better balance of buyers and sellers in Europe, where most deals are done on a delivered ex-ship (DES) basis. Under a DES deal, the seller doesn’t pass ownership of LNG until the fuel is delivered to the buyer at the import terminal. DES Prices linked to indexes such as JKM or downstream gas hubs like the Dutch Title Transfer Facility incorporate shipping costs to market. In this sense, a physically settled futures contract might be better suited to the European market.

“Most companies prefer to sell DES as it means they retain flexibility and are not at risk of the buyer turning up late with a vessel and creating issues upstream,” Lindsay added.

But Hitch doesn’t see it that way. He said FOB deals on the Gulf Coast allow for more flexibility. Most U.S. buying is done on long-term contracts that don’t have destination clauses prohibiting what can be done with a cargo. Buyers are free to resell those volumes in the spot market and they do.

“There are a lot of people buying from the Gulf Coast,” Hitch told NGI. “You’ve got three different companies producing LNG” at the Freeport and Cameron terminals in addition to Cheniere’s Sabine Pass and Corpus Christi plants.

“But when you actually look at the long-term offtake out of those projects, you’ve got dozens of companies that have anywhere from a lot to a little LNG that they’ve contracted for, so it’s a pretty fragmented supply source in that sense,” he added. “I don’t think there’s a structural problem with the market that precludes the CME contract from working.”

It could also simply be a matter of time before the CME contract is traded. JKM, which reflects the spot market value of cargoes sold on a DES basis in North Asia, launched in 2009. It took over a year to attract enough market makers before the contract took off, Lindsay said.

CME’s McCarthy also pointed to the company’s Henry Hub contract, one of the world’s most traded natural gas futures. While the contract traded relatively fast after it was introduced, it took years to develop between the time the U.S. market was deregulated in the mid-1980s and the first trade in April 1990.

“The majority of people want there to be sufficient liquidity before they start trading,” Lindsay said. “They don’t want to go first. Once it’s liquid, they’ll trade it. But someone has to go first.”