Energy Transfer LP (ET) said Tuesday Pennsylvania has granted a waiver allowing it to conduct limited work on the Mariner East (ME) pipeline project during broader economic restrictions imposed by Gov. Tom Wolf to mitigate the spread of coronavirus. 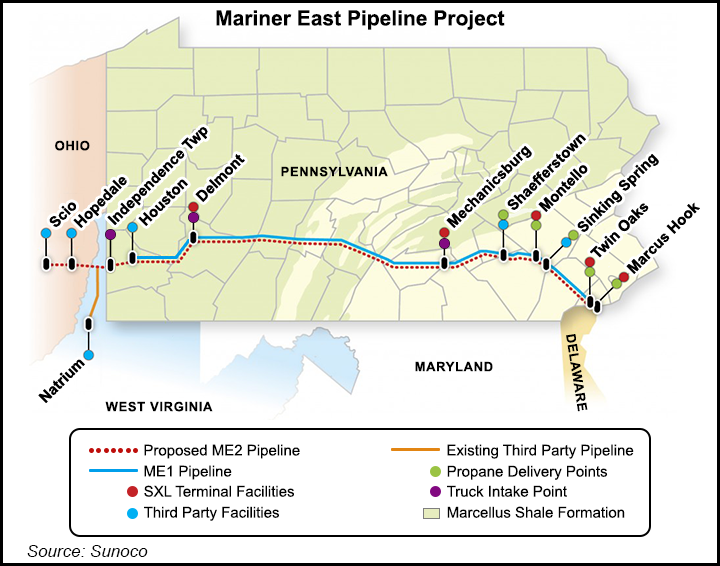 Wolf ordered all “non-life-sustaining” businesses to shut down physical operations last week. While oil and gas extraction, transportation and distribution were allowed to continue, general construction activity on the pipeline project was forced to stop, along with a wide array of other building projects.

ET subsidiary Sunoco Pipeline LP is allowed to proceed with efforts to monitor and maintain rights-of-way and works sites for the ME project, spokesperson Lisa Coleman said. The company may also resume stabilization and move equipment at work sites.

“We are in the process of resuming these activities while adhering to the protocols outlined in the order to ensure the continued safety of our workers and the surrounding communities,” Coleman said Tuesday.

ME 1 entered service in 2016 to move natural gas liquids (NGL) from one side of the state to the other. ME 2 also entered service last year using a short stretch of repurposed line that once moved refined products. It has ramped up since, but work still needs to be finished on the mainline in Chester and Delaware counties.

Work on ME 2 and 2X has repeatedly been stalled by regulatory and legal setbacks. Environmentalists had pushed the Wolf administration to shut down construction last week as the state imposed more restrictive measures to combat the virus.

The pipelines are considered key to moving more NGLs out of the Appalachian Basin. ME 2 and 2X run parallel for about 350 miles and eventually could deliver 525,000 b/d from processing facilities in Ohio, Pennsylvania and West Virginia to the Marcus Hook Industrial Complex near Philadelphia for export and domestic distribution. ME 1 moves 70,000 b/d of NGLs.

ET said last week maintenance on its pipeline systems and facilities that are in service could continue throughout the duration of the state’s order.