More than half of the natural gas pipeline projects that entered service were in the Northeast during 2012, a year in which overall U.S. capacity investment slowed. 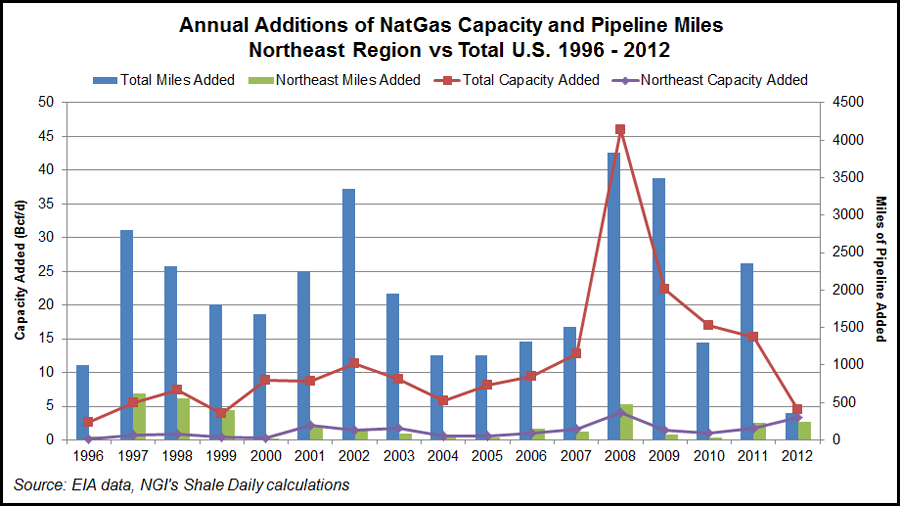 While only 367 miles of pipeline was added, pipelines can significantly boost capacity at targeted locations through the addition of compression horsepower and/or pipeline looping in order to remove bottlenecks.

Last year, project sponsors completed 245 miles of new pipeline in the Marcellus Shale region, representing the second highest annual additions since 1997, and 8% higher than in 2011, EIA said. Miles of pipe added to the Northeast accounted for two-thirds of all new pipeline in the United States starting service in 2012.

Capacity additions nationwide peaked in 2008 at 46 Bcf/d, as did total miles added (3,830), according to EIA data and NGI’s Shale Daily calculations.

Despite gains in pipeline capacity additions and shale-driven gas production in the United States since 2005, the greater New York metropolitan area and especially New England markets still experience frequent constraints. Coupled with declining production at Sable Island in Nova Scotia and limited liquefied natural gas deliveries into the Northeast, this has caused much higher gas prices at certain trading points in the Northeast compared to the rest of the United States (see Daily GPI, Jan. 23).

According to EIA, data from the Pennsylvania Department of Environmental Protection showed Pennsylvania gas production averaged 6.1 Bcf/d in 2012, up from 3.6 Bcf/d in 2011. “While accelerated drilling in recent years, primarily in the Marcellus Shale formation, significantly boosted Pennsylvania’s natural gas production, increases were restricted by the state’s limited pipeline and processing infrastructure,” EIA said. “This created a large backlog of wells that were drilled but not brought online [see Shale Daily, March 22].”