Magnolia Oil and Gas Corp. may be at the beginning of a year-long surge in production growth after a strong showing in the first three months of the year in the Eagle Ford Shale and Austin Chalk formation. 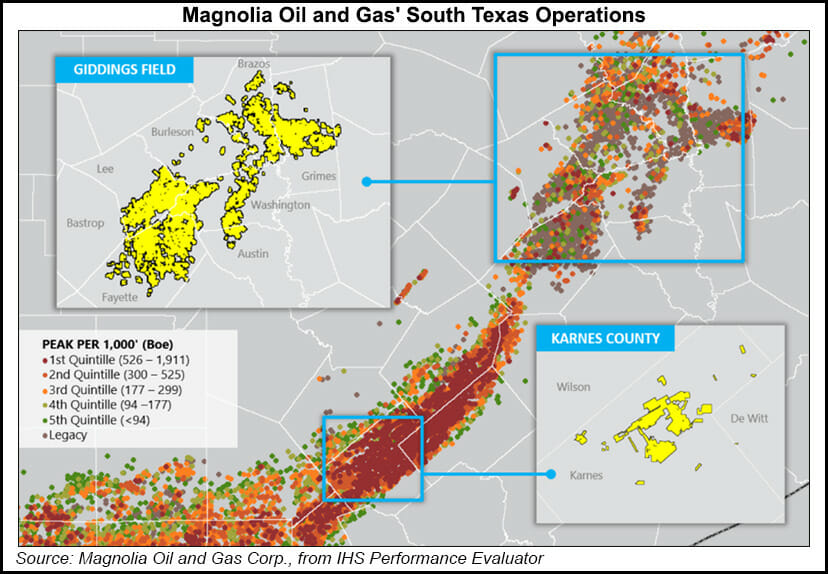 The Houston-based independent previously launched development programs for parts of its South Texas assets, including the Giddings field and in Karnes County. Management in reporting the 1Q2022 results show those efforts are at the tipping point of a significant pay-off.

CEO Steve Chazen said much of the first quarter’s success was from the Giddings, which has quickly grown from about one-third of total production to nearly 60%. More progress is expected, he said, as the company continues to develop the field.

“With Giddings still in relatively early stages of development, our operating team’s improved understanding and growing experience will allow us to increase the oil and gas recovery ability…,” Chazen said.

Production was at the high end of guidance, attributed chiefly to the growth of its Giddings asset. The wells there produced 31% more oil during 1Q2022 than in the year-ago period.

Management forecast production would continue to rise through the rest of the year. For 2Q2022, production guidance was estimated at 72,000-74,000 boe/d. Magnolia raised its production growth guidance from the single digits to a 10% boost throughout 2022.  Giddings production could also grow by around 25% during the year.

Chazen said Magnolia was in a fortunate position, but the exploration and production industry in general was facing restrictions that may limit growth and keep commodity prices lofty.

While Magnolia touted success with cost containment, capitalizing on the success will require more capital expenditures. The company is raising its budget for drilling and completion by $50 million for the year to $400 million. Most of that added cost was attributed to drilling longer laterals in quicker time and rising costs for material and labor.