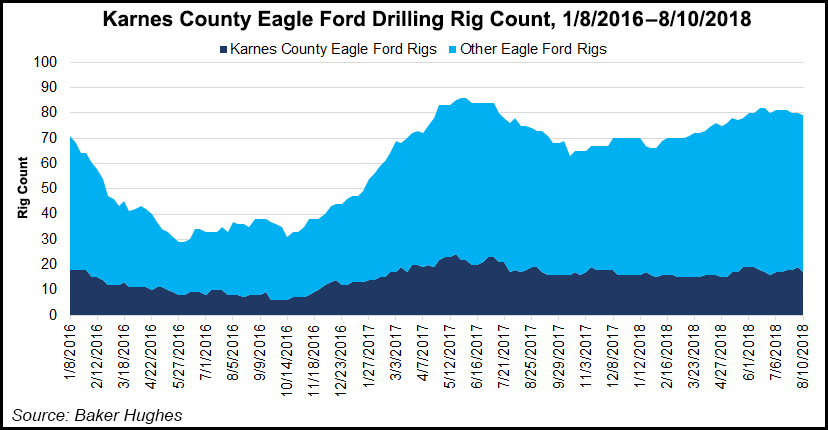 By the end of July, TPG had secured agreements and formed the publicly traded independent, with an initial leasehold estimated at around 360,000 net acres.

“We are increasing our production guidance for 2018 based on a combination of better-than-expected first half results due to continued strong well performance and an updated forecast for the second half of 2018,” Chazen said Tuesday. “We now expect our full-year 2018 production to average approximately 50,000 boe/d, compared to our previous outlook of 45,600 boe/d.”

Average combined production in 2Q2018 climbed 7% sequentially to 49,600 boe/d, 61% weighted to oil and 77% liquids-heavy. Karnes County assets produced an average 39,600 boe/d in the quarter, which was 9% higher than in the first three months of the year. Production from the Giddings field averaged 10,000 boe/d.

“Looking ahead to the third quarter, we expect to bring on line multiple wells in both Karnes and Giddings that should further highlight our strong presence in these areas,” Chazen said. “We are also evaluating a few small-to-medium size bolt-on acquisition opportunities that fit our business plan and have similar financial and operating characteristics to Magnolia’s existing assets.”

Magnolia expects the number of net wells to increase, “resulting from an increase in nonoperated activity and an increase in efficiency in our Karnes drilling program. We expect the production related to this activity to be evident later this year and into 2019.”

One drilling rig was raised in Karnes County in May, and the company now has three rigs total working its entire leasehold, with two in Karnes and one in the Giddings field. The company’s one completion crew recently shifted to Giddings from Karnes, with a second rig slated for Giddings next year.

“We expect the business to continue to generate significant cash flow after capital,” Chazen said, “and we are on track to exceed our previously announced financial and operating objectives for the year.”