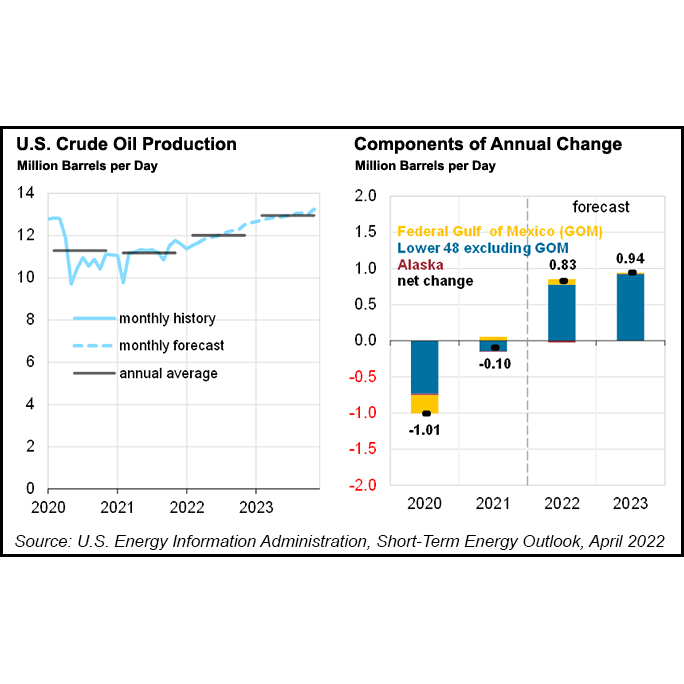 Irving, TX-based Pioneer is among the largest producers in the Permian Basin, with operations focused on the Midland sub-basin.

As evidence, Sheffield pointed to comments by oilfield services CEOs, including Halliburton Co.’s Jeff Miller and Helmerich & Payne Inc.’s John Lindsay, who indicated that drilling equipment was nearly sold out.

Fracturing fleets “are pretty much used up,” particularly for the high-tech equipment, Sheffield told analysts during a conference call to discuss first quarter earnings. “The good-spec rigs are pretty much used up and you can always do newbuilds, but you’re going to pay significantly higher pricing, and you’re going to sign three-year type contracts.

“So, I think in this world of returning capital to shareholders, I just don’t see that happening.”

Due in part to the scarcity of equipment, production growth forecasts by the Energy Information Administration (EIA) and other prognosticators are “too aggressive over the next two years for U.S. oil production,” Sheffield said.

Pioneer is sticking to its plans to cap annual production growth at 0-5% for the foreseeable future.

Sheffield said he does not expect natural gas takeaway constraints to be an issue in the coming months, citing recent announcements of planned capacity expansions.

Pioneer has set an expected capital budget of $3.3-$3.6 billion for this year, to be fully funded by operating cash flow.

The company expects to operate an average of 22-24 horizontal drilling rigs in the Permian Midland this year, and to place 475-505 wells on production.

Pioneer is forecasting average drilled lateral length of 10,500 feet/well in 2022, which would be a 4% increase from 2021. The increase includes adding about 50 wells with 15,000-foot laterals to the 2022 program, management said.

In 2023, this figure should double to about 100 wells, and reach “100 to 150 in future programs,” CFO Richard Dealy told analysts during the call. He estimated that 20-25% of Pioneer’s drilling program “will be those longer laterals for the foreseeable next five to seven years, probably.”

“Drilling longer laterals, reducing drilling days per well and completing more feet per day, among other operational efficiencies, continue to improve capital efficiency and is helping to mitigate cost inflation pressures being experienced by the industry,” management said.

Dealy said Pioneer expects to feel cost inflation impacts most acutely this year in its purchases of steel, diesel fuel, drilling chemicals, “and to a much smaller extent,” fracturing sand. The CFO estimated that about 60% of Pioneer’s costs are locked in for the 2022 capital program, with the remainder subject to incremental inflation.

Pioneer reported net income of $2 billion ($8.25/share) for the first quarter, versus a net loss of $70 million (minus 33 cents) in the same period a year ago.

The company placed 138 horizontal wells on production during the first three months of 2022.

Pioneer has temporarily added an additional fracturing fleet during the second quarter to mitigate the impact on full-year output.