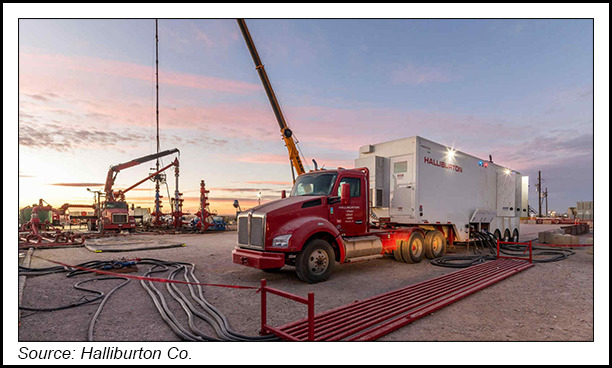 The Houston-based company, the No. 1 hydraulic fracturing company in North America, kicked off the first quarter earnings season for the oil and gas complex. During a conference call to discuss results and the outlook for 2022 and beyond, Miller shared a microphone with CFO Lance Loeffler.

“We see significant tightness across the entire oil and gas value chain in North America,” Miller said. “Supportive commodity prices and strengthening customer demand against an almost sold-out equipment market are expected to drive expansion” in margins for the Completion and Production (C&P) and Drilling and Evaluations (D&E).

For example, D&E margins eclipsed 15% in the first quarter “for the first time since 2010,” the CEO noted.

“I think everything we see, including…energy security, sets up a busy year in North America clearly, and strong growth internationally,” MIller told analysts. The key is that both North America and overseas activity are climbing at the same time, which is “something we really haven’t seen in a very long time, and it sets up very well, certainly for us.”

“We believe that this accelerating multi-year cycle is different and more sustainable than prior cycles due to operators’ focus on short-cycle barrels,” Miller said.

Haliburton is predicting that E&P spending will rise by about 35% this year, which is 10% higher than the company predicted in February.

Activity is expected to build “throughout the balance of 2022,” Miller told analysts. “Then it probably continues to get legs. And in 2023, likely beyond, I think the key is $100 oil.”

At triple-digit oil prices, “everything is busy,” he said. “People want to be busy. But the question is, can they be busy? What we’ve seen is really seven years of underinvestment around the entire world, with spending about half of what we used to spend…

“That’s not something that’s overcome in a day or a year. That just takes time to get momentum…We’ll build into growing production over time,” but “I don’t think that you see the real long-cycle type work.” MIller said. “It’s just going to take quite a bit of time.”

Halliburton has hiked prices because equipment is “almost sold out,” the CEO said. The higher equipment sales have propelled revenue, but the company also is dealing with historic inflation rates and supply chain issues.

“We’ve moved on price, and we will continue to move on price as we work certainly this quarter, next quarter and through the year,” Miller said of capturing more sales. “I think it is a bit of sticker shock because you’ve seen inflation across the entire sector…

For North America, revenue during the first quarter climbed 37% from a year ago to $1.9 billion.

Halliburton also recorded a one-time impairment of $22 million for 1Q2022, primarily related to writing down all of its assets in Ukraine. The charges included $16 million in receivables because of the ongoing conflict.