Lower 48 explorers are on track to increase oil production by 16% this year, with growth of around 1.1-1.2 million b/d, according to Rystad Energy. 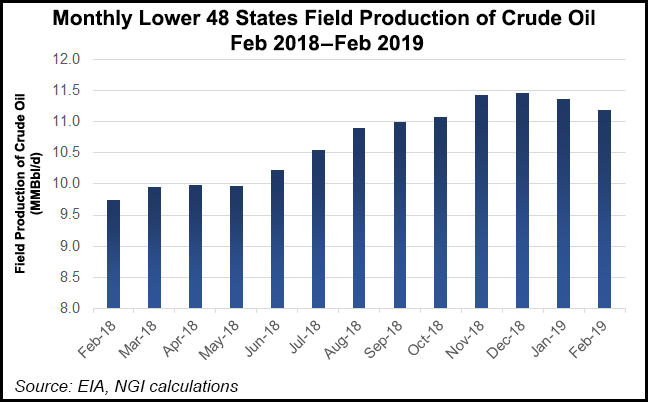 U.S. exploration and production (E&P) companies during first quarter conference calls had assured investors they would achieve targets this year while demonstrating capital discipline, even though some production levels fell short of forecasts.

“Despite temporary challenges faced in the beginning of the year, E&P companies are set to deliver on their original production and capital targets, with some being well positioned to perform above initial expectations,” senior analyst Veronika Akulinitseva said.

“U.S. shale players can still be expected to deliver around 16% oil growth in 2019. Several operators have in fact raised their production guidance for the remainder of the year.”

Rystad analyzed the first quarter results of about 50 U.S. onshore operators, which found a slowdown in overall oil production growth, with output up 0.1% from the fourth quarter.

“The slow first quarter implies an even steeper expected growth curve for the remainder of the year. In fact, acceleration of oil production for many operators is already underway and oil additions are thus likely to increase notably already in the second quarter of 2019,” Akulinitseva said.

Rystad said North American tight oil is emerging as the “second cheapest source of new oil volumes globally,” only behind the Middle East onshore market, based on the latest cost of supply curve update. The ranking is done on the world’s total recoverable liquid resources by their breakeven price.

In 2015, North American shale oil ranked as the second most expensive resource, according to Rystad’s global liquids cost curve, with an average breakeven price of $68/bbl. The average Brent breakeven price for tight oil is now estimated at $46/bbl, only $4.00 under the giant onshore fields in Saudi Arabia and other Middle Eastern countries, analysts said.

“The North American tight oil industry has changed considerably since 2014, as it has proven to be a competitive supply source in a low price environment,” Erlingsen said. “While costs for tight oil have been reduced, the resource potential has grown considerably over the last four years.”

“Tight oil is a short cycle investment with a relatively brief lead time from the sanctioning of new wells to the start of production,” Erlingsen said. “This gives E&P companies the flexibility to adapt to market conditions and easily change activity levels. In the ever-changing oil price environment, this implies tight oil investment has less uncertainty compared to offshore.”