Global buyers are increasingly scrutinizing how liquefied natural gas (LNG) is produced and delivered, with an eye on the environment. A proposed export terminal in Louisiana could be the first to produce net-zero emissions LNG. 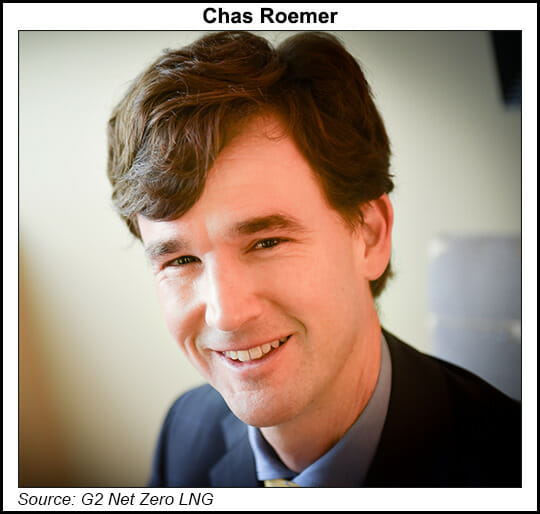 G2 Net Zero LNG Chairman Chas Roemer believes a more responsibly produced LNG is imperative as both the environment and market demand it. At full capacity, the G2 terminal would produce 13 million metric tons/year (mmty) of LNG from a location on the Calcasieu Ship Channel. The company expects to start exporting super-chilled fuel from the $11 billion project by 2027.

NGI: Is this the first net-zero LNG export project under development in the world?

Roemer: I think it is. My guess is others are looking at similar things around the world. I think we will be the first to achieve net-zero LNG production.

NGI: How is G2’s project different from other terminals planning to use carbon capture systems to help curb emissions?

Roemer: We started this project about two years ago. We’re not only looking at the emissions of our plant, we’re going upstream and looking at the source of our feed gas as well. We plan to capture 100% of our plant’s emissions, and we’ll reduce our emissions at the wellhead by an estimated 85%. We’ll also have a small amount of carbon offsets to cover the rest of our feed gas.

Offsets will be a very small percentage of what we do. There are a lot of companies talking about getting to net-zero with nothing but offsets. But when we’re at full capacity, we will capture over four million tons of carbon dioxide on an annual basis. I’m glad people are doing offsets, I think it’s important that society is doing what it can where it can, but I don’t think anyone actually believes that offsets will ultimately be the solution to environmental problems.

We’re looking at everything from the wellhead to our site. We’ve started looking at eliminating emissions from assets downstream that we won’t own, but we haven’t developed that fully. We’re in conversations with those from around the world who want cleaner energy. Ultimately, we expect to take this all the way to the end-user.

NGI: How do you achieve net-zero emissions for the upstream and downstream aspects of your project that the company won’t control?

Roemer: There are companies operating today that are already trying to reduce emissions at the wellhead. We have our own profile of things that we think can be done as well to further curb emissions. We have parties that will help certify the legitimacy of those things. Most of our plans are based on available technology. This is not something we have invented; it’s the willpower and desire to use the technology at scale.

We are in conversations with multiple potential providers of our feed gas to enter an upstream joint venture, as well.

NGI: Why did you start developing this project?

Roemer: Part of what’s happening is the world is shifting; it is paying more attention to the environment than it ever has. We know of several potential buyers who want LNG produced without emissions. Our hope is to partner with those companies to capture emissions across the value chain.

We started on the net-zero aspect of this project two years ago, but we were planning to build what I call a “traditional LNG facility” five years ago. I was traveling the world and meeting with potential buyers — doing the same thing that everyone else was. It was a crowded market, and we needed to differentiate ourselves from a business perspective. The market was also turning; it is now demanding this. The environmental footprint of this business is being considered more often. Some governments and private companies are mandating lower emissions. Quite frankly, I felt if we kept pushing forward with a traditional project, it would be obsolete.

Personally, I live in Louisiana —  an oil and gas state — and I also want to show that you can do these things with fossil fuels, do them cleanly and make a profit. I think we’re going to do that. If we do, Louisiana would be the first place in the world to produce net-zero LNG.

Roemer: It depends on how you calculate costs. If we’re just comparing the costs of output between our facility and a traditional plant, then yes, it costs more.

However, if you look at the costs of not removing the emissions, there’s an additional price. How do you quantify that? By capturing emissions, I’ll end up with more products to sell like argon, nitrogen and electricity that will offset additional costs. I would also venture to say that our products will earn a premium for being clean. I don’t have that in my pro forma materials, but the market will demand it. We will be in high demand.

Simply put, while some energy companies not producing net-zero LNG may find themselves out of business within the next two decades, we expect to be selling our new product by 2027, and will have been generating a profit three years before that with the sale of our clean by-products (phase one of the project will bring on net-zero power generation by 2024).

NGI: How will LNG be bought and sold from the terminal? Have you considered what type of commercial structure it will operate under?

Roemer: It’s most likely going to be a hybrid structure, but I can’t tell you at this point exactly what that looks like. I’m speaking with trading companies, multinational energy companies and utilities. I’m dealing with multiple parties, each of which has different business models. I don’t view my offtakers as just customers either; we’re building in the flexibility to bring in partners too.

We could probably start operations if we get 4 mmty of capacity commitments from offtakers. We have a lot of negotiating still to do, but we are in nonbinding discussions that would exceed that 4 mmty requirement.