Liquefied natural gas (LNG) developer NextDecade has an option on land it’s considering for a terminal site in Galveston, TX. The project is seen as a potential complement to a terminal the company is planning to construct in Brownsville, TX. 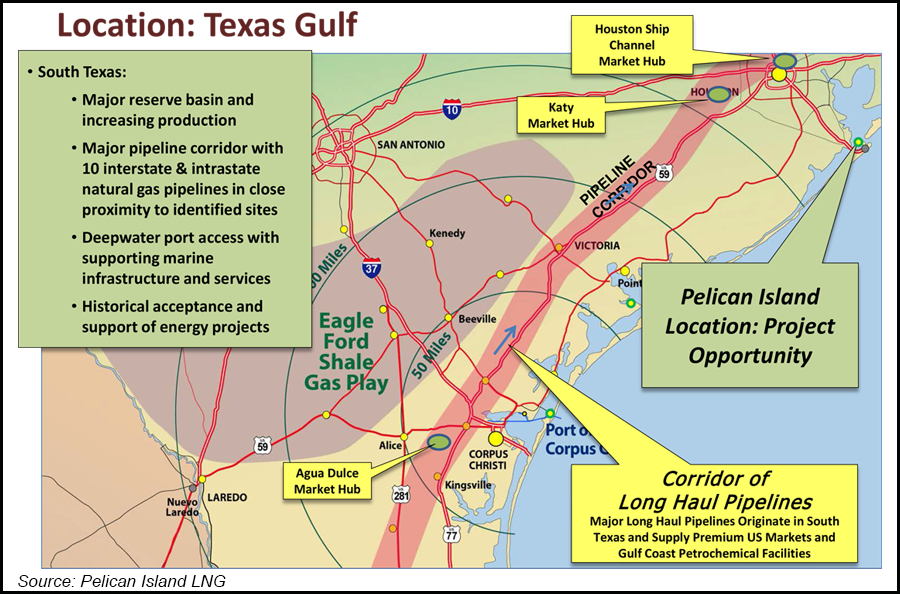 This week the Port of Galveston awarded NextDecade a six-month option on 185 acres on Pelican Island for $100,000; the option can be extended at additional cost. Pelican Island is near the Houston Ship Channel and is an ideal location for an LNG export terminal, partly because the area isn’t already clogged with proposed LNG projects, NextDecade CEO Kathleen Eisbrenner told NGI.

“Pelican Island is on the very south end of Galveston but almost the north-most point in the Gulf of Mexico,” Eisbrenner said. “It’s very nice logistically in many ways in that we can get into deepwater almost immediately in the Gulf. The area is very familiar with vessel traffic of all sorts, which is very good.”

However, marine-wise the location is not suitable for a floating LNG (FLNG) project like The Woodlands, TX-based NextDecade is planning at the Port of Brownsville. Pelican Island LNG would be a land-based project, and its site is much smaller than the Brownsville project’s 500 acres. While Brownsville is planned to have two 4 million ton per annum (mtpa) liquefaction vessels (see Daily GPI, Dec. 20, 2012), Pelican Island would have total capacity no greater than 6 mtpa, Eisbrenner said.

The Pelican Island and Brownsville projects would potentially serve the same markets for LNG, assuming both are built. However, they could source gas from different locations and would liquefy gas priced off of different index points, Eisbrenner said. The Agua Dulce Hub would be the liquidity point for the Brownsville project while Pelican Island would use the Katy Hub, with which it would be connected via a proposed pipeline as part of the project.

“We like the idea of Galveston from the perspective of being able to pick up not just Texas gas and Louisiana gas, but also Marcellus and Appalachian gas in general,” Eisbrenner said.

Years ago, a 1 Bcf/d LNG import facility had been evaluated for the Pelican Island site by BP plc, according to slides from a NextDecade presentation to Port of Galveston trustees. Some studies for that project were completed and would aid development of Pelican Island. “The BP original development provides a road map for both [Pelican Island LNG] and the port, and comfort with a potential project being successful at this location,” NextDecade told port trustees.

Earlier this year the U.S. Department of Energy (DOE) revamped its protocol for evaluating applications to export liquefied domestic gas to non-free trade agreement countries, effectively requiring FERC project approval before taking up consideration of applications to export. Some in the industry argued that putting the costlier Commission process before the less-onerous DOE review increased risk for developers (see Daily GPI, Aug. 14). However, Eisbrenner likes having the Federal Energy Regulatory Commission as the first project gatekeeper.

“I think [the DOE procedural change] absolutely affects us and in a positive way,” she said. “We’ve always said that FERC should be the gating process that you need to satisfy to have a chance to have a legitimate project, and that’s what we plan to do.”

Prefiling at FERC for both Brownsville and Pelican Island is expected “very early next year…That’s my optimistic hope,” Eisbrenner said. “The goal is to have both [projects] win at the end of the day, but the reality is if there’s an issue with one but not the other, I’d rather know about those and learn from it as we go.”