Rising tensions in the Middle East that kicked off the New Year and sent a brief jolt through energy markets weren’t enough to outweigh the global supply glut that has kept a lid on liquefied natural gas (LNG) prices.

Crude oil surged to a nearly four-month high in the days after a U.S. attack killed a top Iranian military leader on Jan 3. LNG prices were poised to spike following the unrest, particularly contracts tied to Brent crude, the global benchmark. Spot prices were also seen vulnerable on the escalation and its possible impact on shipping in the Strait of Hormuz.

The reaction, however, was short-lived and crude prices stabilized. LNG futures jumped slightly with oil prices and Asian spot prices inched up by a few cents, but have since fallen.

Global LNG volumes have continued to soar, with exports hitting 33.7 million metric tons (mmt) last month, versus the 31.3 mmt in December 2018, according to ClipperData. Increasing volumes have incentivized more spot trading of the super-chilled fuel and undermined longer-term contracts that are often linked to oil.

“Crude-indexed LNG continues to be much more expensive than spot LNG, so this situation may not have a big impact on how LNG importers will be optimizing their purchases of spot versus long-term contract supply,” said Energy Aspects analyst James Waddell, who is based in London.

Some concerns remain, however, particularly for the shipping sector, said broker Fearnleys AS. Risk premiums for vessels passing through the Strait of Hormuz could increase LNG prices. Wood Mackenzie said in a note on Monday supplies in the region, particularly from Qatar, are still seen at risk this year if there are any disruptions in the strait.

Meanwhile, U.S. LNG exports have continued increasing. Nineteen vessels, including eight from Sabine Pass, five from Freeport and two each from Corpus Christi, Cove Point and Cameron carried 68 Bcf overseas during the week ending Jan. 8, according to the Energy Information Administration (EIA). That’s up from 17 vessels that carried 59 Bcf for the week ending Dec. 18, the last time EIA released figures before the holidays.

The increase came after Kinder Morgan Inc.’s Elba Island facility in Georgia and the second train at Freeport LNG sent first cargoes last month. Pipeline deliveries to U.S. LNG export facilities have also trended upward, hovering above 8 Bcf/d since the beginning of the year, according to NGI’s U.S. LNG Export Tracker, which showed feed gas deliveries at 8.79 Bcf/d on Monday (Jan. 13). The increase comes as the second train at Cameron LNG in Louisiana is also being commissioned.

Sempra Energy, which owns and operates Cameron, said last week it may open a regional headquarters in Houston later this year to support its growing LNG business in the Gulf Coast region. In addition to Cameron, Sempra is developing various export projects, including Port Arthur LNG in Jefferson County, TX, and Energia Costa Azul in the Mexican state of Baja California.

Meanwhile, the Federal Energy Regulatory Commission has granted Cheniere Energy Inc.’s request to start early work on the third stage of Corpus Christi LNG. Trains 1 and 2 are already operational, while the third train is expected to come online next year. The project’s third stage includes adding seven midscale liquefaction trains to increase overall output to 25 mmt/year (mmty). The Commission authorized pile testing activities, soil stabilization tests and other work, but noted that site preparation and construction have not yet been authorized.

Europe has absorbed the excess world’s excess LNG supply, as demand has also fallen off in key markets like those in the Asia Pacific region.

European LNG inventories were at 57% of capacity over the weekend, versus a five-year average of about 54%. The higher-than-normal LNG levels have sent European benchmark prices to their lowest levels in months and the outlook isn’t seen improving, with 18 LNG tankers due to arrive in northwest Europe in January, according to figures released by Bloomberg last week.

“In 2020, Europe will again be called upon to save the day,” said Wood Mackenzie research director Robert Sims. “However, unlike 2019, European gas inventory will start the year at record high levels. Europe will thus need to rely even more on flexible supply, or increased demand creation from within the power sector, compared to last year.”

In other developments, Qatar Petroleum (QP), the world’s largest gas producer and leading LNG supplier, has agreed to supply up to 3 mmty of LNG to Kuwait. The state-owned operator inked a 15-year agreement with Kuwait to start supplying LNG in 2022. QP has plans to boost current liquefaction capacity by 64% by 2027. 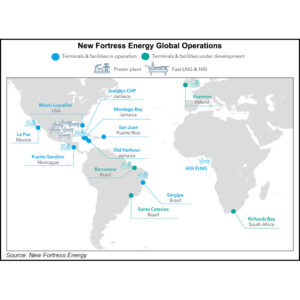