A surge in feed gas deliveries to export terminals and a hurricane headed for the northern Gulf Coast that has forced some offshore producers to shut-in volumes sent U.S. natural gas futures up sharply on Monday. 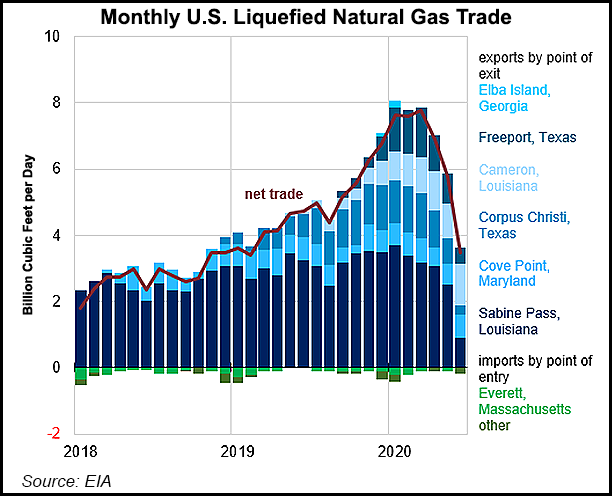 Feed gas volumes hit their highest point since May on Sunday, surpassing 7 Bcf and were at about the same level again on Monday. The ramp up in liquefied natural gas (LNG) production is being driven by Cheniere Energy Inc.’s Sabine Pass terminal in Louisiana, which restarted operations Sept. 4 after the plant was knocked offline last month by Hurricane Laura. Nominations to Sabine Pass on Monday were at 3.3 Bcf, according to NGI’s U.S. LNG Export Tracker.

“The rapid increase in utilization is tracking ahead of our expectations, helping to further firm up the U.S. gas macro and relieving any residual risk of a storage crunch,” said analysts at Tudor, Pickering, Holt & Co.

Feed gas deliveries are poised to move even higher when Sempra Energy’s 2.3 Bcf/d Cameron LNG facility returns to service. Widespread power outages caused by Hurricane Laura remain in Southwestern Louisiana, where the facility is located. Area utility Entergy still has more than 48,000 customers left to restore, including several industrial complexes like Cameron LNG. Neither the utility nor Sempra has released a timeline for power restoration.

“Our utility provider continues to make progress on the restoration of the power grid in the area,” Cameron spokesperson Anya McInnis said Friday. “We continue to work closely with them to coordinate partial power restoration to our site as quickly and safely as possible to support testing and the initiation of startup activities.”

Natural gas production in the Gulf of Mexico (GOM) had dropped by 795 MMcf to 882 MMcf early Monday, according to Genscape Inc. That helped push October Henry Hub prices upward. The National Hurricane Center said it was monitoring five named storms in the Atlantic. The shut-ins were prompted by Hurricane Sally, which was upgraded from a Tropical Storm on Monday and is expected to strengthen further.

Storm surge, high winds and flash flooding were expected over parts of the northern Gulf Coast. At midday Monday, the center of Sally was expected to move over the north-central GOM, approach southeastern Louisiana Monday night and make landfall on Tuesday in the hurricane warning area, which stretches from Morgan City, LA, to the Alabama/Florida border.

The jump in U.S. prices Monday came after global benchmarks declined last week. In Europe, a slide in oil prices and the prospect of more U.S. LNG deliveries as Sabine Pass was ramping up dragged down prices. LNG prices in North Asia have been following stronger European prices, but retreated as the rally came to an end and more supply became available in the region.

Global gas prices were stable to start this week with additional demand emerging in Asia and lower wind output forecast for the remainder of September helping to lift prompt prices in Europe, among other factors.

But oil continued trading below $40.00/bbl on Monday as the outlook dims with questions over demand still pestering the market. Brent-linked LNG prices, assuming a 17.2% slope, were at $6.81/MMBtu on Monday, compared to more than $10.00/MMBtu at the same time last year, according to NGI calculations. Elevated storage inventories, slowing demand and a weak global economy still battling the Covid-19 pandemic are weighing on the fuel.

In other news last week, the Federal Energy Regulatory Commission gave Freeport LNG Development LP a three-year extension to place a fourth train online at its LNG export terminal on Quintana Island in Texas. Freeport requested an extension earlier this year, citing a weak global economy and the need for a new engineering contractor. The company now has until May 17, 2026 to place the facility into service.

Tellurian Inc. also said it received a delisting notice from Nasdaq because the price of its common stock has closed below $1.00/share over the last 30 trading days. Tellurian is developing the 27.6 mmty Driftwood LNG export terminal in Louisiana. The company said it has until Sept. 4, 2021 to regain compliance with Nasdaq’s listing standards.