Feed gas started trickling into Sempra Energy’s Cameron liquefied natural gas (LNG) export facility in Louisiana over the weekend, a little more than a month after it was shut down before Hurricane Laura made landfall. 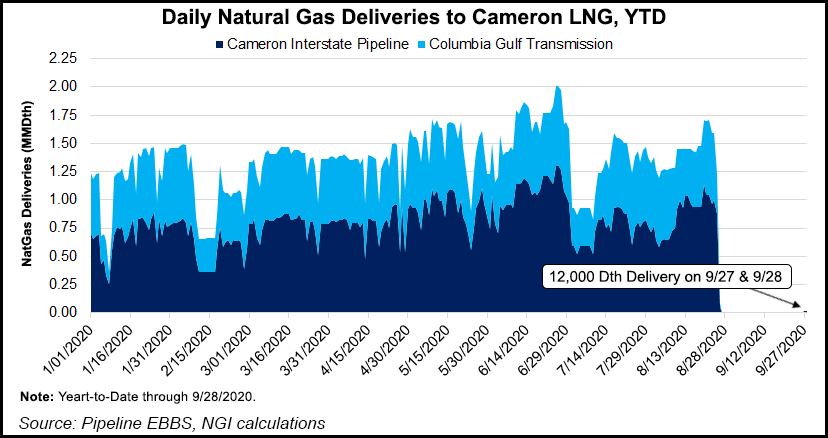 About 12 MMcf of natural gas was delivered to the facility on Sunday, with the same amount scheduled for Monday, according to NGI’s U.S. LNG Export Tracker. Sempra shut down the terminal in Cameron Parish on Aug. 26, a day before Hurricane Laura came ashore as a Category 4 storm knocking out power and causing other damage throughout the region.

Entergy Corp. restored power at the terminal on Sept. 18 and Sempra said Friday that “significant progress” has been made on the necessary testing and start-up activities to resume operations. The company said start-up was underway Monday and feed gas volumes are expected to fluctuate as the process continues.

The U.S. Army Corps of Engineers, which maintains the Calcasieu Ship Channel that allows ships to travel to Cameron, was still dredging the waterway Monday in order to allow deep draft vessel traffic. That work is expected to continue into next week.

The outage at Cameron, along with other disruptions caused by Tropical Storm Beta, weak demand and weather forecasts has stoked significant volatility in U.S. gas trading this month. October’s $1.834/MMBtu closing pricing on Sept. 22 was the first time since early August that the prompt contract had settled below $2.00, but it bounced back and finished well above that point in the days that followed.

Ten LNG vessels departed the United States during the week ending Sept. 23 with a combined carrying capacity of 37 Bcf, according to the Energy Information Administration. That’s down from the 11 vessels that carried 41 Bcf in the prior week.

Annual fall maintenance got underway at the Cove Point terminal in Maryland on Sept. 21 bringing operations there to a standstill. Maintenance is expected to last about three weeks.

But the natural gas outlook is strengthening at home and abroad.

U.S. feed gas deliveries are expected to hit 9 Bcf/d by November as winter gets underway in the Northern Hemisphere, according to Tudor, Pickering, Holt & Co. Even as Henry Hub futures are seen climbing above $3.00/MMBtu through the winter months, arbitrage spreads with key markets for LNG in Europe and Asia are near or well above $1.00, according to NGI calculations.

A colder winter is expected in Europe following the continent’s hottest on record last year. In the near-term, forecasts have moved lower pushing prompt prices to new yearly highs along with the prospect of supply disruptions as oil and gas workers in Norway could reportedly go on strike. In Asia, the Japan-Korea Marker continues to move higher as buying interest increases from major consumers like Japan and South Korea.