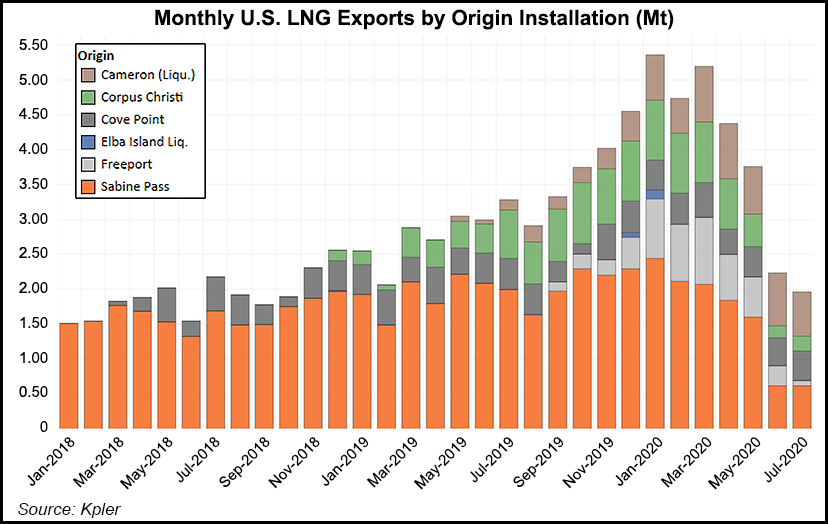 Henry Hub gas for September delivery jumped 33.5 cents week/week to average $2.090/MMBtu on Friday, while the prompt contract at the Dutch Title Transfer Facility (TTF) and the UK’s National Balancing Point both gained about 60 cents or more week/week. A tightening European market also helped push spot prices for September and October delivery in North Asia up by more than 60 cents, demonstrating how closely all three markets have integrated.

Fewer cargo cancellations next month as the forward curve improves in Asia and Europe, along with weather-driven demand, weaker production and stronger industrial consumption in the United States helped lift Henry Hub. In Europe, meanwhile, Norwegian maintenance that starts next week, increasing Ukranian storage injections that are aiding European inventories and weak liquefied natural gas sendout, along with lower Russian flows, have helped benchmarks there, according to Schneider Electric.

In North Asia, declining supplies and even extended maintenance at Chevron Corp.’s Gorgon LNG facility off the coast of Western Australia have also helped prices.

The likely September increase in U.S. exports will “come as a welcome sign” for LNG producers that have struggled with a weak global market, according to data intelligence firm Kpler. More than 100 U.S. cargoes have been cancelled this summer, and Kpler noted Monday that September cancellations are expected to be half of the 40-45 expected in August.

Cheniere Energy Inc.’s Sabine Pass and Corpus Christi export terminals are likely to benefit the most, Kpler said, given that departures from the terminals managed just 800,000 tons in June and July, marking a decline of roughly 2.3 million tons from the first quarter. Loadings from Cove Point and Cameron, the firm added, finished July in line with year-to-date averages.

Five LNG vessels with a combined carrying capacity of 18 Bcf left the United States during the week ending Aug. 5, according to the Energy Information Administration. That’s down from seven vessels that left with 25 Bcf aboard in the prior week. NGI calculations now show U.S. cargoes headed to Europe in the money in September, while deliveries to Asia would be profitable again by October.

Tudor, Pickering, Holt & Co. (TPH) cautioned last week, however, that the market is only just beginning to strengthen.

“European storage is beginning to accelerate again, which should be cause for concern for both TTF and Henry Hub, given how tightly tethered the two markets are,” the energy investment bank said Friday. Since Russia’s Yamal LNG returned from maintenance, TPH added, European storage builds have averaged 8 Bcf/d, compared to just 3 Bcf/d during the outage.

European Union storage was at 87% capacity at the end of last week, while Ukranian inventories, which gas traders have increasingly turned to this summer to handle excess volumes on the continent, were at 74% of capacity.

“We still model balances eking their way through October, but it’s going to be touch and go, with the risk of significant pricing response if either supply or demand slips the wrong way,” TPH analysts said of the European market.

In other news, Sempra Energy said Monday that the Cameron LNG export terminal in Louisiana has started full commercial operations now that Train 3 is officially on line. It marks the beginning of “full run-rate earnings” under the facility’s tolling agreements, Sempra said.The first train at the 12 million metric tons per year (mmty) facility entered commercial service in 2019, followed by the second train earlier this year.

Elsewhere on the Gulf Coast, Tellurian Inc., which is developing the 27.6 mmty Driftwood LNG terminal in Louisiana, reported an $81.1 million impairment for the value of its oil and gas properties in the Haynesville Shale during the second quarter. The impairment was included in the company’s $128.8 million (53 cents/share) loss for the second quarter. After delaying a final investment decision on Driftwood in June, Tellurian now expects first gas in 2024.

In Australia, Chevron received notices from regulators for the inspection of two trains at Gorgon LNG. A train has been down at the facility after defects were found in heat exchangers that could be related to manufacturing issues. The problems could prolong maintenance at the facility.

“If discharged, this would mark the first LNG from Australia to Chile on our records,” the firm said.