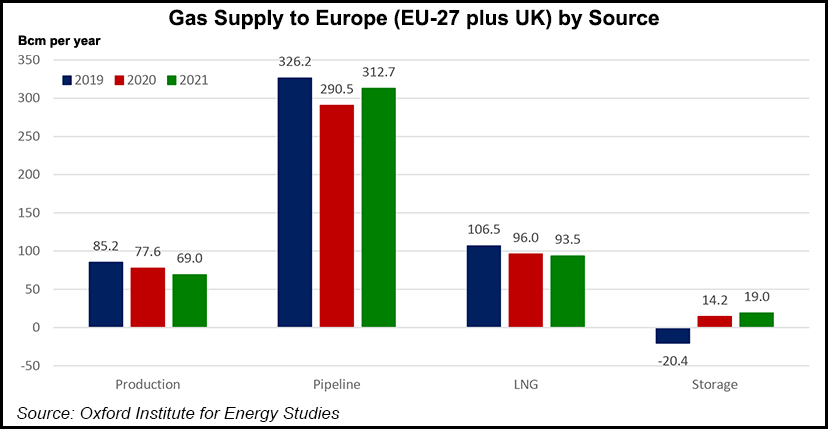 When Gazprom PJSC cut off deliveries to both countries last month for refusing to comply with Russia’s payment requirements for natural gas, Greece and other nations in southeast Europe quickly offered to help the two countries replace Russian supply shortfalls.

“These are not large volumes immediately needed by Poland and Bulgaria and could be covered through reconfiguring intra-European Union flows – both via pipeline and LNG, and some gas-to-coal switch in power generation. Also, the fact that Russian supplies were interrupted in the spring also helped,” said researcher Marco Giuli, of the Brussels School of Governance in Belgium.

Although both countries hold long-term contracts with Gazprom that were set to expire this year,  Poland has had plans in place since 2019 to halt Russian gas imports by the end of 2022, when the Gazprom contract was due to expire.

Polish Oil and Gas Co. (PGNiG) said last month that Poland would cover its gas demand from various sources, including pipeline and LNG imports, and underground storage facilities that are nearly 80% full.

Poland consumes about 20 billion cubic meters (Bcm)/year of natural gas, with 9.9 Bcm delivered via the Yamal pipeline from Russia. It is less vulnerable than Bulgaria, which relied on meeting more than 90% of its gas demand from Russia.

Greece soon expects to help. Within the next two years, the country could be capable of importing far more than its one operating LNG terminal.

Greece’s Prime Minister Kyriakos Mitsotakis noted during an address to the U.S. Congress Tuesday that Russia currently supplies about half of the 10-11 Bcm annually consumed in southeast Europe. The proposed floating storage and regasification unit (FSRU) Alexandroupolis would double Greece’s liquefaction capacity.

Greek utility Gastrade SA plans to locate the vessel about 11 miles off the Greek port of Alexandroupolis to supply LNG to Greece, Bulgaria, Serbia and North Macedonia. The 5.5 Bcm/year facility is slated to be operational at the end of 2023.

It would be the second import gate of LNG in Greece, making the country a gas hub for transportation of LNG into Europe, Mitsotakis noted.

“As we seek to rapidly diversify away from Russian gas, investing in the necessary infrastructure that will make it possible to import large quantities and LNG becomes critical. Not just for Greece, but also for our Balkan neighbors,” Mitsotakis told U.S. lawmakers.

Two more Greek LNG projects are under development. Greek oil company Motor Oil Hellas Corinth Refineries SA expects to reach a final investment decision on its 2.5 Bcm/year Dioryga LNG project by the end of the year. Meanwhile, a subsidiary of Hellenic Petroleum SA and Italy’s Edison SPA have plans for an FSRU off Thessaloniki in the Thermaikos Gulf slated to start up in 2025.

Greece has supplied Bulgaria with gas since Russia cut supplies via the Revithoussa LNG terminal off Athens on the island of Revithoussa. Bulgaria expects to ink more LNG deals with Greece and Turkey.

Bulgaria is also set to receive LNG supplies from the United States beginning in June. “Real deliveries of LNG to Bulgaria at prices lower than the ones of Gazprom have been agreed as of June,” the government said last week.

In Poland, the Swinoujscie LNG terminal on the Baltic Sea is being expanded from an import capacity of 5 Bcm to 7.5 Bcm.

In its shift away from Russia in recent years, Poland has expanded its relationships with pipeline suppliers and LNG exporters, particularly those in Norway, Qatar and the United States.

New access to pipeline gas in both Poland and Bulgaria is expected to help the countries cope with winter gas demand this year.

A new pipeline, the Gas Interconnector Greece-Bulgaria (IGB)  between the Greek town of Komotini and Bulgaria’s Stara Zagora, would link to the Trans Adriatic Pipeline (TAP) to deliver Azerbaijan gas to Bulgaria.

Bulgaria is set to start receiving 1 Bcm of gas from Azerbaijan on July 1, which would supply a third of the country’s annual demand. Deliveries would be made using alternative routes if the IGB is not completed by its summer start-up date, the Bulgarian government said this week.

Guili noted that gas is not widely used in Bulgaria’s residential sector. As a result, he said winter demand spikes aren’t excessive.

In Poland, gas delivered from Norway via the Baltic Pipeline would help replace the country’s 9.9 Bcm/year of Russian volumes when it comes online in October.

PGNiG Upstream Norway plans to produce an additional 0.5 Bcm of gas on the Norwegian Continental Shelf, so the Baltic pipe from Norway to Poland can ship an additional 3-4 Bcm, Guili told NGI. The pipeline is expected to reach full capacity of 10 Bcm/year by 2023.

Another supply source for Poland is the Gas Interconnection Poland-Lithuania (GIPL) pipeline, which links the countries and began deliveries earlier this month. GIPL is expected to supply Poland with 2 Bcm/year, covering 10% of the country’s annual demand. The pipeline is expected to reach full capacity in October, and can deliver gas in both directions from Poland to Lithuania and onwards to Latvia and Estonia.