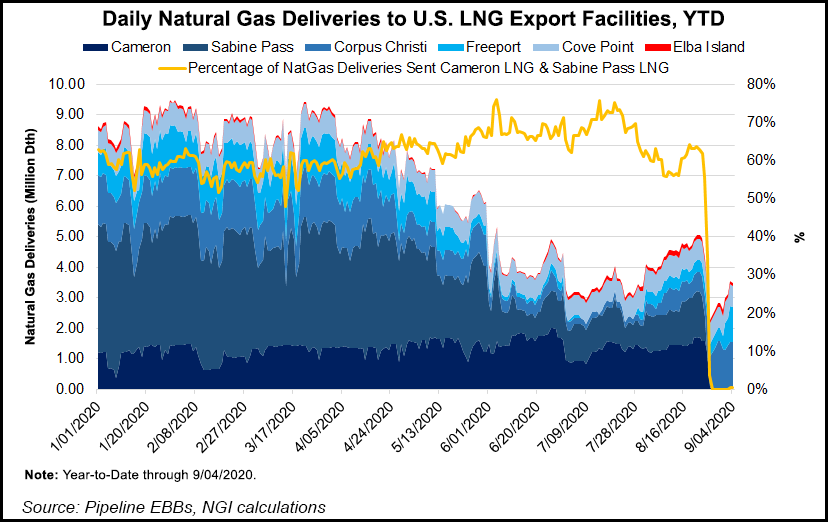 The Sabine Pass and Cameron LNG terminals on the Gulf Coast, the two largest in the United States with a combined export capacity of nearly 8 Bcf/d, remained offline Friday with no clear timeline for restarting after Hurricane Laura hit late last month. Meanwhile, Chevron Corp. said Thursday it would delay the restart of Train 2 at its 2 Bcf/d Gorgon LNG plant in Australia by about a month because it needs more time to repair welding cracks discovered earlier this year.

LNG sendout in Europe remains low, down 31% year/year, according to Schneider Electric, as the number of deliveries to the continent expected in the days and weeks ahead is also uncertain given loading disruptions on the Gulf Coast.

A sharp reduction in German power generation, lower nuclear availability, less pipeline supplies from Norway and Russia, along with higher gas-fired power demand and less storage injections are among the other factors that have supported European gas prices lately. Prompt contracts there have hit highs not seen since January, with both the Dutch Title Transfer Facility (TTF) and the National Balancing Point (NBP) at or above $4.00/MMBtu for October delivery.

The European rally has helped push up Northeast Asian prices that were already on the rebound. Buying interest has returned in the region, particularly from China, South Korea and Taiwan.

“Worries about further delays at the Australian Gorgon LNG plant” have lifted Asian benchmarks too, “resulting in a tighter LNG outlook as we are heading towards the start of the heating season,” Schneider analyst Balint Balazs said in a note to clients on Friday.

The strip on Thursday showed a 2021 price of $5.388 at the Japan Korea Marker (JKM), with TTF at nearly $5.00  for the calendar year. Questions remain about whether those prices are sustainable. Tudor, Pickering, Holt & Co. said the strip is trending too high given the supply glut and demand outlook amid a pandemic that’s still challenging the global economy. “We still see the need for LNG curtailments come spring,” TPH analysts said Friday.

Others noted that the market is not entirely clear of the challenges that have plagued it this summer.

“One of the things we’ve heard a lot about is buyers that spent all spring and summer stocking up on cheap LNG. There are probably some who went too far and are looking to unload some tons, especially as people are starting to look at freight markets as a way to make some money,” said Poten & Partners’ Jason Feer, global head of business intelligence, during a recent webinar.

“I think a lot of companies had to make decisions on the fly, and I think over the next month or two there are going to be a lot of adjustments made as people balance their positions and get a better handle on what demand looks  like in the winter.”

As the market tightens and price spreads improve, Poten said it’s heard of only about seven U.S. cargo cancellations for October lifting, well below the double-digit cancellations the market saw throughout the summer. Moreover, the firm said those cancellations are likely to be tied to specific issues for offtakers, such as high freight rates or vessel availability, rather than a weak market.

Shipbroker Fearnleys AS noted that the LNG shipping market is heating up with fewer vessels available.

“The Pacific and Middle East continue to see more activity through a combination of bilateral discussions and tender business, while the Atlantic is seeing higher rates and longer fixtures,” the firm said in a recent note to clients.

While Cameron LNG took a direct hit when Hurricane Laura came ashore and could be offline for weeks given damaged power lines near the facility, Sabine Pass could be online by next week, said EBW Analytics Group.

“Once Sabine Pass fully ramps back up, feed gas flows could reach up to 3-4 Bcf/d,” the firm said Friday. “Even if restart of Cameron continues to be delayed, as appears increasingly likely, this could bring total LNG feed gas flows to as much as 6-7 Bcf/d.” That could reignite the U.S. natural gas rally that has lost steam over the last week or so given weaker weather outlooks and LNG demand uncertainty, EBW added.

“We have begun the process of safely mobilizing work crews and are in close contact with Entergy Louisiana, the waterworks district that serves Hackberry, LA, and the Lake Charles pilots regarding their restoration timelines, how we can assist their efforts, and how to minimize impacts on our timeline for the restart of Cameron LNG operations,” spokesperson Anya McInnis said in a update on Friday.

The maximum Gulf Coast LNG netback price for October delivery on Thursday between TTF, JKM and NBP was $3.402/MMBtu, or about 92 cents higher than where Henry Hub futures settled, according to NGI calculations. As global prices are expected to continue rising in the months ahead, U.S. LNG exports could near capacity.

[See how netback prices and a wide array of other data are impacting North American LNG producers and the global gas market by subscribing to NGI’s LNG Insight.]

Data intelligence firm Kpler said Friday that September is “setting up to be a strong month” for North American LNG exports, with cargo departures expected to trend higher over the next 10 days.