It was 50 years ago this month that the Methane Princess delivered the world’s first commercial liquefied natural gas (LNG) cargo from Algeria to the United Kingdom. Much has changed since, and notably, Algeria could see its profile as an LNG supplier grow while European consumers increasingly turn to the fuel as an alternative to pipeline gas from Russia. 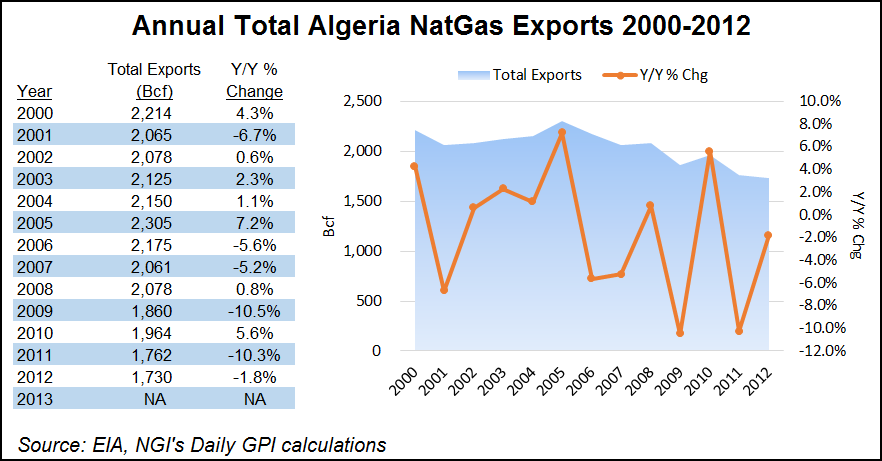 Said Sahnoune, CEO of Algeria’s Sonatrach, said at the recent International Conference on the Algerian Gas Industry that the country plans to begin shale gas production in 2022. By 2025, production of 10 billion cubic meters could be achieved, he said, as quoted by press reports. Algeria has also continued to develop its LNG since the early days in the 1960s, according to remarks made at the conference by Sonatrach’s Azzedine Bezzaouya, development manager. The country is now the world’s fourth-largest exporter of LNG, he said.

Algeria is Africa’s leading natural gas producer and the second-largest supplier of natural gas to Europe, according to a U.S. Energy Information Administration (EIA) report released earlier this year. The North African country is estimated to hold the third-largest amount of shale gas resources in the world. An EIA study estimates that Algeria contains 707 Tcf and 5.7 billion bbl of technically recoverable shale gas and oil, respectively.

Oil and natural gas export revenues amounted to almost $63.8 billion in 2013, down from $69.8 billion in the previous year, mainly because of lower export volumes, according to the Middle East Economic Survey, EIA said.

In 2013, Algeria was the world’s seventh-largest exporter of LNG, exporting about 5% of the world’s total exports, according to EIA. The country has liquefaction units located along the Mediterranean Sea at Arzew and Skikda, with a total design capacity to process almost 3.2 Bcf/d, according to PFC Energy, EIA said. Sonatrach is building another LNG train at Arzew, with a planned capacity of 0.6 Bcf/d, to process natural gas output from the Gassi Touil project.

The global LNG industry has grown to include more than 400 trade routes involving 45 countries since the first LNG cargo left Algeria in 1964, according to consultancy Wood Mackenzie.

One of the countries poised to be an offtaker of increasing supplies of LNG from Algeria and elsewhere is Greece. If the event that pipeline deliveries of gas from Russia are disrupted due to Russia’s ongoing conflict with Ukraine, Greece is positioning itself to take more LNG from Algeria to cover any gas shortages, according to press reports.

Among the growth and other changes that have taken place in the LNG world, the Arun LNG project in Aceh in northern Sumatra has stopped production and is in the process of switching to an import facility, according to press reports. The plant is majority owned by Pertamina. Indonesia is still one of the world’s largest exporters of LNG, but domestic gas production has been in decline while domestic demand is growing. Since 1999, exports of LNG from Indonesia have fallen by 40%.

And in Japan, imports of LNG continue to grow, according to statistics from Japan’s Ministry of Finance cited by EIA in a recent report. Increased LNG imports are occurring amid continued shutdowns of nuclear power plants following the March 2011 disaster at the Fukushima Daiichi nuclear power plant and the subsequent increased reliance on fossil fuels for power generation, EIA said. Higher levels of LNG imports in 2014 are underpinned by continuous growth in gas-fired power generation, the ready availability of spot LNG supply because of weak demand in Europe and Asia (particularly in South Korea) and lower short-term prices.