Natural gas prices claimed higher ground in 2018 to $3.00/MMBtu-plus, as demand at times exceeded expectations, a trend that could continue unless Lower 48 production overpowers consumption, according to analysts. 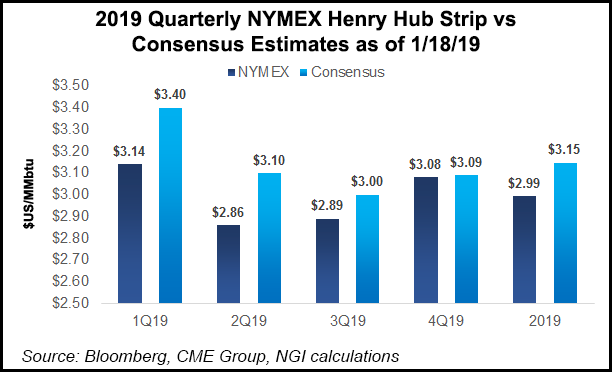 Several energy analysts have begun forecasting their gas price outlooks. The Energy Information Administration last Tuesday said inventory is likely to build faster than the five-year average, which would keep a lid on Henry Hub prices, now expected to average just $2.89/MMBtu in 2019, a 26-cent decline from the 2018 average of $3.15.

BMO Capital Markets estimated Friday the industry requires a Henry Hub price of $2.75/Mcf to sustain production within cash flow. Analysts estimated the economic breakeven price to develop gas in North America is “in the range of $4.25.”

Sanford Bernstein’s analyst team sees signs that there will be enough of a gain in global gas demand to nudge prices a bit higher on average. Societe Generale (Soc Gen) is not as optimistic.

Soc Gen’s analyst team led by Breanne Dougherty is bearish on Henry Hub 1Q2019 contracts and revised down its 1Q2019 price forecast to $3.00/MMBtu. That compares to the forward market’s price of $3.38.

Contracts for the first quarter to date this winter have seen some material volatility, Dougherty noted.

“Just a week ago our price view was neutral to the curve, but a recent forecast for cold has revitalized the market once again,” she said. “As long as the anticipated cold snap doesn’t extend into a sustained cold period, we hold our bearish view relative to today’s prices.

Soc Gen’s forecast for 2Q2019 and 3Q2019 is $2.75/MMBtu on average, versus the forward market’s $2.86. If the forecast for sustained cold holds into February there is some upside, but gas production growth this year is likely to “overpower demand and help to continue to improve storage optics.”

In addition, Permian Basin gas takeaway constraints are cutting into the supply outlook, which could boost prices. Bernstein’s near-term 2019 price also is $3.00/MMBtu, but demand may nudge prices higher.

“We expect demand in 2019 to increase 3.4 Bcf/d, or 3.5% from 2018,” Salisbury said. “This is comprised of 2.6 Bcf/d of LNG, and 1.8 Bcf/d of industrial,” offset by a decline in residential/commercial (res/com) and power demand.
A slightly warmer-than-normal winter should reduce res/com demand by about 1 Bcf/d, while industrial demand from ethane cracker start ups, continues to climb slowly.

Gas export startups in 2018 were relatively slow, with Dominion Cove Point in Maryland the biggest start up in the Lower 48. However, Train 5 of Cheniere Energy Inc.’s Sabine Pass project in Louisiana last year began loading cargos earlier than expected, with full capacity expected this year.

On the production side, output is forecast to continue moving higher on the pipeline buildout in the Northeast and from associated gas, mostly from Permian Basin oil wells. Bernstein’s supply model is forecasting 3 Bcf/d of associated gas growth, which actually would be lower than last year.

“The Permian cannot materially grow until October 2019 due to gas takeaway constraints,” Salisbury said. In addition, oil prices likely will average lower than in 2018, which in turn is expected to pressure activity in the Eagle Ford Shale and Oklahoma’s stacked reservoirs.

BMO analysts estimated that the Marcellus Shale “appears to have a sustaining capital breakeven price of approximately $3.25/Mcf based on our assessment of companies that are focused on the play…This compares to an ”economic’ breakeven of $2.00-6.00/Mcf based on actual reported three-year average results.”

The type curve of Marcellus-focused producers “suggests an economic breakeven that is much lower and below the sustainable capital requirement,” BMO’s team said.

Another big gassy play, the Montney formation in Western Canada, has a sustaining capital breakeven price of about US$2.60/Mcf, based on BMO’s assessment, while Deep Basin operators have a breakeven of roughly $2.50/Mcf.

Overall, associated gas from onshore oil drilling is expanding quickly, according to Bernstein, at a rate of around 3 Bcf/d when using the analyst’s 2019 crude price of $60/bbl West Texas Intermediate. Bernstein expects the Permian alone to add at least 1.9 Bcf/d year/year — but it could be higher if pipelines were flowing.

The Eagle Ford, Oklahoma’s stacked reservoirs and the Denver-Julesburg Basin of Colorado should show some associated gas growth too, but the Bakken gas growth would “simply displace Canadian gas imports,” Salisbury said.

“We believe this will split at 3 Bcf/d from the Marcellus and 1 Bcf/d from the Haynesville,” Salisbury said. A production increase may push U.S. gas prices to around $3.10/MMBtu on average.

Beyond an “obvious” near-term need to reduce gas growth in 2019, given the supply demand dynamics, Tudor, Pickering, Holt & Co. (TPH) analysts said “it may ultimately prove to be value destructive to continue to deplete limited core inventory in gas basins while associated growth is still extremely robust.”

TPH’s asset level analysis suggest that over the next four to five years, U.S. oil-heavy basins, including the Bakken, Eagle Ford, Denver-Julesburg, Oklahoma’s myriad reservoirs and parts of the Permian “will start to approach an activity plateau as core inventory depletes.

“Additionally, as we have highlighted, some gassy public core inventories are likely to deplete rapidly over the same time in an accelerated case. From our perspective, the forward curve does not fully reflect this fact long term, and one could ask why companies would want to grow in 2019 into an oversupplied market.”

The Bernstein model also included an overall vertical decline from U.S. onshore fields of 1.5 Bcf/d this year. The decline rate refers to the annual reduction in the rate of production overall after output peaks.

A slight vertical decline is expected from already low-producing Barnett and Fayetteville shales, but there’s a “wedge of 4 Bcf/d” that needs to be filled from the Marcellus and Haynesville shales to reach “normal” storage levels.

The declines last year aren’t considered a structural change (yet), but the Bernstein team still increased its decline forecast slightly to 1.5 Bcf/d.