Making the most of America’s recently realized and growing natural gas endowment dictates the use of gas for more than the traditional commercial and industrial applications. Many people are working to promote liquefied natural gas (LNG) as an alternative to fuels such as diesel and propane. One of them is Peter Tumminello, AGL Resources Co. executive vice president of wholesale services.

Tumminello told attendees at Gladstein, Neandross & Associates’ HHP [high horsepower] Summit 2012 in Houston on Friday that AGL has been reallocating personnel and resources to capitalize on the peaking LNG infrastructure the Atlanta-based utility holding company has in the southeastern United States and build out from there.

“The prize is inordinately large. This is a significant value proposition for the end-users as well as the developers,” Tumminello said at the conference, whose purpose was to share information on using natural gas in high horsepower applications.

Among AGL Resources holdings is Pivotal LNG, which offers LNG solutions to companies with high-fuel use applications such as high-mileage fleets or heavy-duty vehicles or high horsepower engines. Tumminello emphasized that AGL Resources is a utility holding company whose shareholders tend to take a long-term view and are satisfied with reasonable returns. It’s the kind of company that “lends itself to investing in this marketplace,” he said.

Tumminello said AGL Resources’ LNG assets can move about 60,000 gallons per day into the market and the company is in the process of expanding capacity, including LNG storage to enable it to backstop operations. While there is a robust spot market for natural gas, the same is not true for LNG. Tumminello said that could change and AGL Resources wants to have a part in creating an LNG spot market. “If you do have excess storage capacity in LNG, then you can make that available on a day-to-day basis,” he said.

One issue of concern to the industry is equalization of the excise tax impact on LNG and diesel fuel. Tumminello said. This is an issue for on-the-road applications where LNG is used as a fuel.

H.R. 3832, the LNG Excise Tax Equalization Act of 2012, was introduced in January by Rep. Mac Thornberry (R-TX) and was referred to the House Committee on Ways and Means. It would amend the Internal Revenue Code of 1986 to provide for the equalization of the excise tax on LNG per energy equivalent of diesel.

David Hill, Encana Corp. vice president for natural gas economy operations, said the Calgary-based producer is an advocate for wider use of LNG and is using the fuel in its oil and gas patch operations. He outlined the current state of North American LNG capacity: 550,000 gallon/d of firm capacity, 6 million gallon/d of peaking capacity, and 240 million gallon/d of import capacity. Export capacity? Well, that remains to be seen.

Not all of North America’s existing LNG capacity is equal. For instance, many of the peaker plants can’t liquefy gas during the winter, but this could be remedied with plant upgrades, Hill said.

Currently, most LNG used for commercial/industrial applications is transported by truck. However, down the road intermodal containers could see wider use carrying LNG, Hill said, rail cars, too.

And in the future, LNG could be fueling the trains pulling those cars. Canadian railway is experimenting now with two locomotives converted to run on natural gas and could expand its program in the future (see related story).

Black & Veatch Corp. and Caterpillar Inc. are two familiar names that are applying natural gas to high horsepower uses. Linde North America recently said preliminary testing of its application to use LNG to fuel power-generating diesel engines (gensets) is proceeding well in southwest Pennsylvania. The test is being conducted by Pittsburgh-based producer Consol Energy’s gas division. Consol is active in the Marcellus and Utica shales and has been testing the solution in three diesel engine-based gensets to produce power used by drilling rigs. 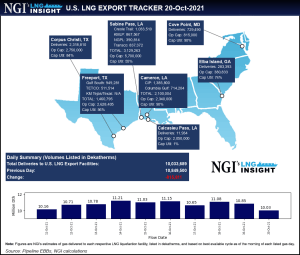 Argentina’s government has launched a natural gas tender to try to shore up domestic supply starting in the Southern Hemisphere winter in 2022. The majority of the gas would come from the Neuquén Basin, home to the massive Vaca Muerta formation. Energy Secretary Darío Martínez said the objective of the tender — part of the…