Editor’s Note: The following segment is one in a series by NGI’s LNG Insight aimed at educating the North American market about the global liquefied natural gas (LNG) trade. 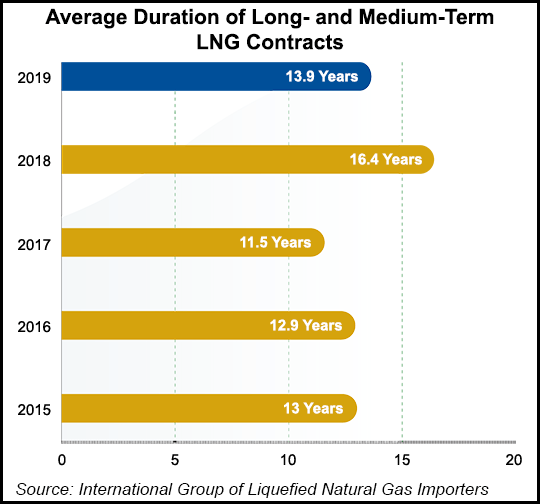 Naturgy, one of Spain’s major natural gas buyers, said last week it has negotiated new terms for two contracts with one of its primary LNG suppliers in a dual symbol of how the global gas trade is evolving and how such discussions can have varying outcomes.

A supply glut and weak market made weaker by the Covid-19 pandemic, along with a spike in spot trading of cheap LNG as prices have fallen precipitously, have given major buyers from Petronet Ltd. to China Petroleum & Chemical Corp., aka Sinopec, an opening to pursue better deals and review supply contracts over the last year or so. But that’s not necessarily an easy thing to do.

Naturgy released few specifics and said only in a regulatory filing that its annual contracted volume was reduced and the price formula was revised. The move comes after the utility said earlier this year that it would seek to renegotiate its natural gas and LNG supply contracts according to the price review clauses included in them. The company even indicated that it was prepared to go to arbitration as Covid-19 has wreaked havoc on the global economy.

While the market is shifting, much of the global gas trade is still underpinned by long-term contracts, signed for supply periods of up to 20 years. Pricing structures negotiated years ago might not reflect the value of natural gas today. Crude prices have also fallen wildly this year as well, and while formulas in some oil-indexed contracts guard against the impact of high crude prices on buyers and low crude prices on sellers, buyers of oil-linked LNG have been sidelined from cheap gas available in the spot market that’s tied to natural gas hub prices.

At this time two years ago, prompt prices at both the Dutch Title Transfer Facility (TTF) and the National Balancing Point (NBP), two prominent European hubs to which LNG sales are linked, were trading at more than $9.00/MMBtu. During the same time, the Japan Korea Marker (JKM) futures contract was trading at more than $11.00 for November 2018. Today, TTF and NBP prompt prices are below $5.00 each and the JKM front-month contract is just above $5.00.

Price review or “reopener” clauses are a key part of many long-term supply contracts, yet they can be difficult to invoke with any success. One trader told NGI earlier this year that it’s always difficult to believe a buyer will have any success renegotiating for a lower price under long-term supply deals as it would be like “opening Pandora’s box” if LNG producers were to alter existing contracts consistently.

Unlike crude oil, there is no global benchmark for LNG and prices vary widely. The super-chilled fuel is often offered confidentiality on an array of indexes and terms that cloud transparency and make it difficult for parties trying to renegotiate prices to determine which marker to use. If parties reach an impasse, there’s likely to be no major changes to the contract. If that’s not an option and financial positions are unsustainable, then arbitration is possible.

Naturgy said its successful negotiations would allow it to optimize its supply mix and minimize its risk profile.

But with more market participants and growing LNG production, a supply-driven market is reducing the appetite for longer-term contracts. New deals that have been signed have included a number of different price structures signed with a mix of oil, natural gas hub and spot prices.

Buyers and sellers are also exploring and executing shorter-term deals of 10 years or less versus the traditional 15-20 year terms, which could be the norm going forward as many long-term contracts will expire in the coming years. The shifting dynamics are not only impacting how LNG is purchased, but other factors, such as how new facilities are financed with offtakers now stepping up for equity stakes in some projects.