Argentina through its Vaca Muerta formation and Brazil with its vast offshore pre-salt reserves, could become major players in international natural gas markets, but much needs to happen before this can occur, experts said this week. 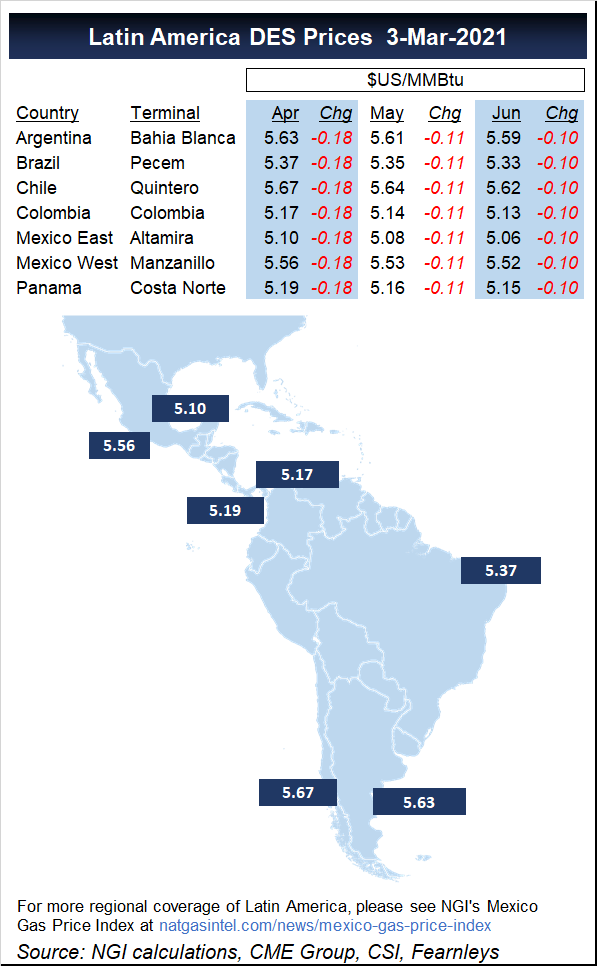 In a panel discussion at CERAWeek by IHS Markit on Wednesday, Argentina’s Pan American Energy CEO Marcos Bulgheroni said the Vaca Muerta was at an “inflection point.”

He said about $20 billion has been invested over the last decade, and “the investment is paying off.” About 1,200 wells have been drilled, leading to technical efficiencies in drilling. “We have got to a point where I believe we see huge growth potential in production.”

Gas production is about 900 MMcf/d from Vaca Muerta, or about 25% of the country’s current gas output.

“The big question mark is: How do we fulfill this potential by connecting the local market which will definitely continue to develop with, in the first place, the regional market, and also the international gas market?”

Building liquefied natural gas (LNG) infrastructure for exports to Asia is the only way to spur development of the resource, he said. “Development of Vaca Muerta, in my view, is linked to the development of an LNG plant.”

Meanwhile, neighbor Brazil is one of the fastest-growing oil regions in the world, and the associated gas produced from its deepwater operations is seen potentially edging out LNG and pipeline imports from Bolivia.

However, according to Total SE’s Philippe Blanchard, local head of exploration and production, “in Brazil, you can get gas from Bolivia at quite a good price…” For the pre-salt deposits, “you need to send that gas back to shore, treat it onshore and send it out on pipeline. So it can be quite expensive. And you cannot take advantage of some of the gas because of the levels of carbon dioxide.”

Until infrastructure improves, Bolivian gas and LNG imports will remain more competitive. In Brazil, natural gas is generally used seasonally in power production when water levels are low at the hydroelectric facilities. Still, Brazil is by far the biggest importer of LNG in Latin America.

“I think pre-salt is at the same juncture as Vaca Muerta,” Blanchard said.

Enuala CEO Decio Oddone said legislation needs to be passed opening up the natural gas market in Brazil to third parties for things to really get going. Now, state energy giant Petroleo Brasileiro SA (Petrobras) has a monopoly in natural gas and a bill to guarantee open access and market prices on pipelines remains in congress. “We have seen a lot of progress, but we still need the new gas bill in order to confirm the opening of the natural gas market,” he said.

Oddone, who previously served as head of Brazil’s oil and gas regulator ANP, said the bill’s passage, which must still get through the senate, will lead to developing an “integrated and strong” gas market. That would lead to increased consumption in the residential and industrial segment.

Meanwhile, regulation in Argentina also needs to be in place to provide investor certainty.

Bulgheroni said Vaca Muerta could be competitive even against the U.S. benchmark Henry Hub given the size of the reserves and shrinking marginal costs.

“From a technical perspective, we can get there. But we need to make sure there is a stable regulatory environment before we make such a big investment. And clearly, we will need a new piece of regulation specifically for a liquefaction plant.”