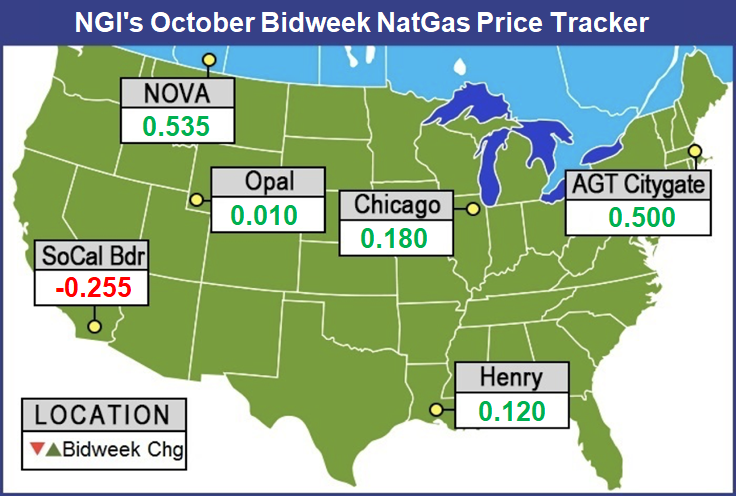 Milder forecasts and the prospect of larger storage injections over the next few weeks saw natural gas futures pull back ahead of the October Nymex contract’s expiration, as a sustained rally going back to mid-September ran out of momentum. The October contract rolled off the board at $3.021, down 6.1 cents on the day but up 12 cents compared to the September expiry.

The November contract recorded an up-and-down first few sessions as the front month, rallying sharply on a lean Energy Information Administration (EIA) weekly storage report before reversing the next day, only to rally once more to probe the $3.080 area early Monday (Oct. 1).

EBW Analytics Group CEO Andy Weissman attributed the price swings over the last week of September to the storage data and shifts in the weather outlook.

“The intensity of these swings sends a clear message: at this point in the heating season, market sentiment is strongly split, with both bulls and bears smelling blood,” Weissman said.

The surge in futures prices going back to mid-September was largely triggered by forecasts that showed a potential cold outbreak in the crucial Midwest and East regions to start October, he said.

“This forecast, however, is proving to be a bust. While there is plenty of cold air in Canada, its primary impact will be in the West; above-normal temperatures are likely to continue in the East,” according to Weissman. “Near-term, much warmer-than-normal weather in the East is expected to result in much higher-than-normal air conditioning demand, offsetting a large loss in previously forecasted” heating demand.

“If warmer-than-normal weather persists further into the fall, however, it — coupled with the start-up of the Atlantic Sunrise and Nexus pipelines — could drag down prices by 15 cents or more.”

As of late September, both the 1.7 Bcf/d Atlantic Sunrise and the 1.5 Bcf/d Nexus Gas Transmission had filed in-service requests with FERC and were awaiting final authorization to begin flowing substantial new volumes of gas out of the Appalachian basin.

Atlantic Sunrise would open up a new pathway for eastern Marcellus production to reach markets along the Atlantic seaboard via Transco. About 550 MMcf/d of capacity on the project has already been placed into service.

Meanwhile, Nexus is designed to flow east-to-west out of Appalachia to markets in the Midwest and Canada. Based on weak day-ahead prices at Appalachian locations to close out September, the new takeaway options likely can’t come soon enough for Marcellus and Utica shale producers.

As of Sept. 28, Dominion South was trading $1.68 back of Henry Hub on average, its widest negative basis differential since last November. Around this time last year, in the lead-up to the 2017/18 heating season, average day-ahead prices at Dominion South traded as much as $2.60 back of Henry.

But October bidweek traders appeared to view the recent weakness in the day-ahead market as a temporary concern, perhaps anticipating the roughly 2.6 Bcf/d of incremental takeaway coming once the Federal Energy Regulatory Commission gives the nod to the Nexus and Atlantic Sunrise facilities. On average, Dominion South dropped just 4 cents month/month (m/m) to $2.430 (the average of fixed and basis trades) during bidweek. Transco-Leidy Line added 3 cents to $2.500.

The Marcellus/Utica region has been a key driver of Lower 48 production growth this year, with the ramp in supply helping the bears make their case entering the 2018/19 heating season even with end-October inventories poised to set a new five-year minimum.

“Supply length has undoubtedly been coloring expectations for winter 2018/19, despite what otherwise appears to be a highly constructive background for price,” global consulting firm Energy Aspects said in a recent note. “In particular, storage inventories are on track to end the injection season just below 3.3 Tcf (compared to last year’s 3.78 Tcf), while the demand side is forecast to deliver a 2 Bcf/d-plus year/year (y/y) gain in structural growth and another 1.2 Bcf/d gain from the power sector this winter.

“However, much of the market’s focus is on what we have termed ”latent storage,’ which is the additional supply available from current production, rather than being pulled from aquifers or salt caverns.”

“While the market’s focus has tended to be on the massive glut of expected supply this heating season, physical participants will have concerns over meeting peak day heating demand,” the firm said. “The issue at stake is the difference between supply deliverability versus supply availability. Such a historically low storage carryout raises issues about transportation constraints that would otherwise be alleviated by storage.

“…If storage at the start of the heating season is at close to a 500 Bcf deficit y/y, that translates to 3.3 Bcf/d less storage availability each day in the heating season. Once we net some 8.0 Bcf/d of supply growth against structural demand growth plus the storage deficit, that leaves the market with just over 2 Bcf/d y/y cushion of supply. On some peak demand days, that cushion simply may not be enough to satisfy the y/y growth in heating demand and gas needed by the power market, especially when the weather is cold.”

Even so, the market’s expectations for supply growth have given it a “far more more complacent attitude about storage than that cushion would suggest on a cold day.”

The 8.0 Bcf/d of forecasted incremental supply y/y this winter doesn’t rule out periods of sustained high pricing during peak cold spells, which could also coincide with supply-side disruptions such as freeze-offs.

“While that scenario focuses on peak demand days, the perception of weather at the start of the heating season has always been crucial to trading,” the firm said. “A cold start to winter would put more upside on the winter strip…With a warm start to winter, the market may be lulled into a sense that storage adequacy will not be a concern as winter progresses.

“…While it seems a bit too easy to call winter pricing weather-dependent, even the example of last year shows how a mild November can shave the curve.”

“Instead basis risk has soared on winter weather events,” with January 2018 — when physical prices rocketed as high as $175/MMBtu in parts of the East Coast — serving as a “dramatic” example, according to Zimmermann.

Meanwhile, the direction the market takes could hinge on whether North America gets a strong El Nino winter, which could crush Henry Hub prices, the analyst said.

“Right now the natural gas market is very concerned with storage levels being a bit below normal,” Zimmermann said. “If we get a strong El Nino winter, below average storage could easily become more than ample. Undersupply could become a glut.”

Northeast traders are likely bracing for a potential repeat of last winter’s basis blowouts, but that didn’t appear to factor into October bidweek pricing. Points further north in New England did gain coinciding with ongoing import restrictions due to maintenance between Algonquin Gas Transmission’s Stony Point and Oxford compressor stations.

As of Oct. 1, the Stony Point outage was one week in and thus far the market response had been “muted” due to “rapidly cooling temperatures throughout the Northeast over the last week, crushing power demand,” according to Genscape Inc. analyst Josh Garcia.

Genscape’s pipeline sample for New England showed gas burns declining to a month-to-date low of 0.57 Bcf/d on Sept. 29 after peaking at 1.76 Bcf/d on Sept. 4. This decline in demand helped drive down spot prices for a number of points in the region, with Algonquin Citygate proving the exception due to import restrictions from the recent maintenance, according to the analyst.

“Current weather forecasts remain in the doldrums, supporting neither” residential/commercial or power demand as of early October, Garcia said.

In late September, Southern California Gas (SoCalGas) announced that it was approaching maximum inventories and would stop allowing injection nominations on its system at the start of October.

As of late September, SoCalGas inventories sat at just under 81 Bcf, the highest level since the 2015 leak at the Aliso Canyon storage field and just shy of current working maximum inventories, according to Genscape analyst Joe Bernardi.

“The current maximum has been achieved in large part due to the increased working capacity at Aliso Canyon that took effect this past July,” Bernardi said. “In addition, decreased demand has contributed to increased injections as the region has experienced a milder September month-to-date than in recent years.

“Demand has averaged 2.08 Bcf/d month-to-date in September 2018, compared to 2.39 Bcf/d last year and 2.48 Bcf/d across the past three years. Meanwhile, average injections are within 5 MMcf/d of last September’s average. The lack of September heat has also allowed prices to remain less volatile” at SoCal Citygate than they’ve been in recent months.

The restriction on injections in Southern California is bearish for West Texas producers and may have contributed to record-low spot prices at Waha in September, according to RBN Energy LLC analyst Jason Ferguson.

“Despite every major artery running near capacity this summer, Permian prices had so far managed to avoid falling below the dreaded $1.00/MMBtu threshold, a precipice that historically defines a gas producing region as definitively oversupplied. That all changed” last month “as word came in that Southern California Gas Co. (SoCalGas), one of the largest recipients of Permian gas, has nearly filled its gas storage caverns and will soon need far less gas hitting its borders.”

In October bidweek action, West Texas locations managed to finish above the $1.000/MMBtu mark, but not by a lot. Waha averaged $1.200, down 9 cents m/m.

Meanwhile, bidweek prices strengthened in Western Canada, another recently constrained producing region, as storage in the region remains below average ahead of the start of winter heating. Analysts with Tudor, Pickering, Holt & Co. (TPH) in late September pegged Western Canada storage at 11% below the five-year average, in contrast to Dawn inventories running about 3% above five-year levels.

“We expect maintenance for nearly all of the remaining injection days, but the tightness in the market should really begin to materialize once we hit November and begin to draw on storage,” the TPH analysts said.

Contango Oil & Gas Co. is set to expand its footprint in the Big Horn, Permian and Powder River basins after agreeing to purchase bank-owned liquidated assets for $58 million. Under the purchase and sale agreement announced Monday, the Fort Worth, TX-based independent is to acquire around 7,500 boe/d of production, 18.3 million boe of…