Latin American nations, which with the exception of Brazil have now imposed tough stay-at-home measures in an attempt to slow the spread of Covid-19, are bracing for the public health and economic impacts of the virus just at a time when a deluge of cheap oil has flooded the global market, battering prices, and making life difficult for many producing nations. 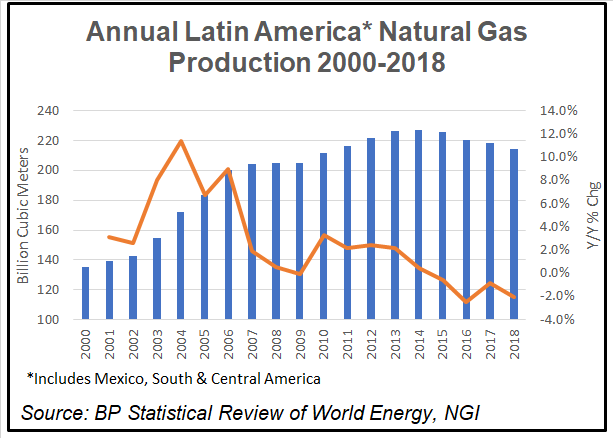 Oil and gas producer states such as Mexico, Brazil, Colombia, Ecuador, Bolivia and Venezuela who depend on oil and gas revenue to fund government spending, will be under terrible strains to withstand the low-price environment, according to analysts.

Landlocked Bolivia’s principal export is natural gas and it currently ships gas via pipeline to Brazil and Argentina. “We just renewed our export contract to Brazil for 25% lower volumes, and that pricing was linked to oil,” said Rios, who previously served as Bolivia’s hydrocarbons minister. “Current prices means our gas income, already reduced to $2.2 billion/year, will now fall to around $600-700 million for Brazil. And the Argentina contract ends this year and we are looking at the same situation.”

In Mexico, state oil giant Petróleos Mexicanos (Pemex) has seen the Mexican basket price plummet from $39.76/bbl at the end of February to $10.76/bbl as of Wednesday. Previous to these unprecedented times, heavily-indebted Pemex had already been hit by a deterioration in investor confidence and credit downgrades. Analysts expect another downgrade and Fitch Ratings Inc. analysts said in March that Pemex is the most vulnerable of Latin America’s national oil companies to a sustained period of low oil prices.

“I think that president Andrés Manuel López Obrador as the ultimate and sole decision-maker, will face a tough decision very soon,” Mexico City-based energy consultant Gonzalo Monroy told NGI. “Either to reverse course and embrace the possibilities offered by the 2013 energy reform, especially joint ventures with Pemex; or to burn down all bridges and radicalize. His pledge to abandon the market-oriented policies and mechanisms of ”the neoliberal era’ is certainly a self-imposed constraint that has reduced his margin to reverse course.”

Rystad Energy said Wednesday that as a result of recent developments, with travel restrictions and quarantine obligations around the world, they forecast global oil demand to decrease by 6.4% in 2020, or 6.4 million b/d. They see April taking the biggest hit, with demand for oil estimated at 77.6 million b/d, falling by a whopping 22.8 million b/d year/year.

While Pemex has not announced any cuts to spending, Colombia’s 88.5% state-owned oil company Ecopetrol SA will reduce capital expenditures (capex) by $1.2 billion in 2020 and Brazilian state firm Petróleo Brasileiro SA, or Petrobras, will slash capex by $3.5 billion to $8.5 billion and will also temporarily curb production by 200,000 b/d or about 6% of total output.

“This is what you will see with all national oil companies and the majors — they have to cut back on their costs,” the Inter-American Dialogue’s Lisa Viscidi told NGI. “Brazil won’t shut down its producing projects. But this will impact exploration and it will impact future production. We will see near-term production hits, but bigger medium and long-term impacts.”

Viscidi added that she sees no new oil and gas auctions in Latin America this year, and that activity in the Vaca Muerta shale formation in western Argentina will see sharp declines. She expects however that the worst-hit nation will be Venezuela and its state oil company Petroleos de Venezuela SA (PDVSA).

“Venezuela has extremely low lifting costs. But the problem is they have to offer such big discounts and they also lose a lot in shipping costs because of the sanctions. They are cash negative on most of their fields. I think we are going to see a big drop in production. Their market options are so limited.”

While the region is expected to go into economic recession — most analysts predict a global recession is imminent — there are at least Latin American nations that serve to save on energy spending and fuel subsidies in the low-cost environment.

“Peru imports oil into refineries, so Peru will benefit,” Rios said. “Chile has no oil and gas, so it is in the same boat. Same thing with Paraguay, and Uruguay. Most countries in the Southern Cone benefit.”

Viscidi agreed. “Ecuador and Colombia will be in trouble, but Argentina will see a fiscal benefit,” she said.

In March, Argentina ordered 11 liquefied natural gas (LNG) cargoes for the upcoming Southern Cone winter as prices for the super-chilled fuel continue to suffer from the demand shock of the coronavirus. State energy firm Integración Energética Argentina (Ieasa) said prices fetched for the requested shipments “were the lowest recorded in the history of the company” and averaged around $3.00/MMBtu.

“The deceleration of the Chinese economy meant the Asian giant had to reject LNG cargoes which led to oversupply in the market,” according to an Ieasa statement. The first shipment is expected for May, the start of the winter.

Last week, Argentine state energy firm Yacimientos Petrolíferos Fiscales SA (YPF) director Daniel González said the drop in domestic natural gas demand due to the nationwide shutdown was not as severe as with other fuels. Natural gas demand was down 15-20% from “previous days,” or compared to when the country was not on lockdown, while demand for gasoline was down 70%, diesel 50% and aviation fuel 90%.

Neighboring Chile, which has about 5 GW of natural gas power capacity, imports LNG from its two terminals, Quintero and Mejillones. Chile saw power demand in the last week of March fall by 4.5% compared to the first week of March, equivalent to a reduction of 419 MW. “We’d expect as measures to confront the virus continue to be put in place that power demand will continue to fall in the short term,” analysts at energy consultancy Systep said in the firm’s latest monthly power report. “In European countries we’ve seen drops in demand of 5% and in Italy and France, 10-15%.”

Mexico imports approximately 90% of its natural gas needs from the United States. In a commentary published Monday by the Woodrow Wilson Center think tank, Lourdes Melgar, a former deputy hydrocarbons minister at Mexico’s energy ministry Sener, said that Mexico should “take advantage of historically low natural gas prices, and boost imports to power generation and industrial plants…The government needs to be aware of the golden opportunity of turning to natural gas at least through 2022.”

Despite the coronavirus, March pipeline imports into Mexico from the United States were averaging about 5.7 Bcf/d through March 29, up 0.7 Bcf/d from March 2019, RBN Energy analyst Sheetal Nasta said.

“The collapse in oil prices is having an effect on producers here in the United States and will no doubt have an effect on Pemex as well,” the director of marketing at Tenaska Marketing Ventures, Geoffrey Street, told NGI. “While vigilant in regard to counterparty credit, Tenaska expects to grow its current business with the state productive enterprises and other Mexican entities.

“Tenaska’s business is 100% cash collateralized, which puts Tenaska in a unique position relative to its peers to move forward at a time when others might pause or take a step back.”

Overall, analysts worry about the ability of Latin American nations to sustain the coming onslaught of coronavirus cases while keeping their economies frozen. Power should remain running, keeping hospitals, ventilators and critical infrastructure motoring, but most predictions of the overall impacts are dire.

“I think Colombia like the rest of Latin America will really struggle,” the director of Bogota-based consultancy Colombia Risk Analysis, Sergio Guzman, told NGI. “Though the government is doing its best to enact social distancing and quarantine measures, it is unlikely that people or the economy will be able to hold it for much longer. This, I presume is the case for most countries that have a high rate of informality.”