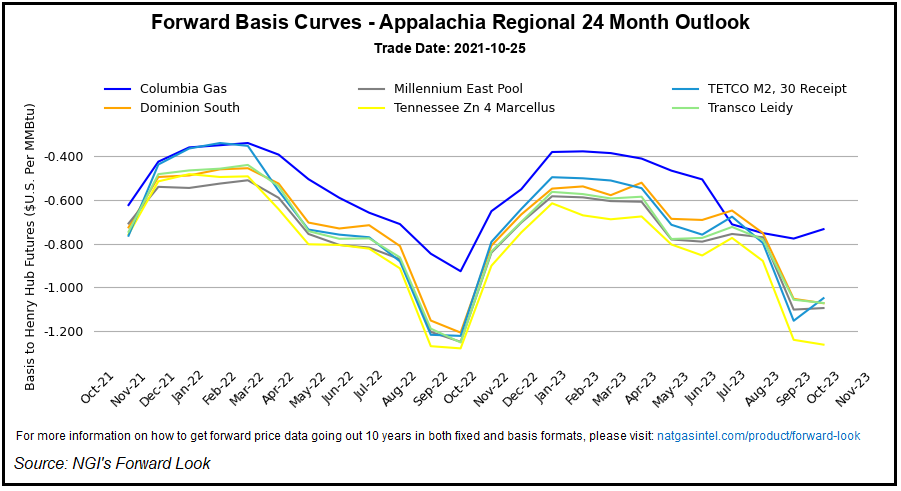 Spot gas prices also started to buckle in most of the United States, though some locations continued to strengthen on bouts of early-season chilly weather. NGI’s Spot Gas National Avg. slipped 1.5 cents to $5.550.

Notwithstanding the brief surge to $6.000 on Monday, natural gas futures have struggled to maintain the lofty levels resulting in recent weeks from global supply concerns. With the U.S. supply picture vastly improving over the past month, and cold weather mostly remaining absent from forecasts, a bearish backdrop has emerged.

On the weather front, the period from Monday (Nov. 1) through Nov. 4 appears to be the only “decent” demand period forecast over the next 15 days, according to NatGasWeather. Weather models showed milder temperatures returning by Nov. 5 as upper high pressure rules most of the country.

“To our view, the Nov. 5-10 pattern can trend colder in time, but if it doesn’t, the 11- to 15-day period will maintain a bearish lean that could disappoint in time,” NatGasWeather said.

There could be stronger cold shots into Europe in the five- to 15-day period, according to the forecaster. However, Asia, Europe and the United States would likely need to wait until later in November for more intimidating frigid shots. NatGasWeather said the longer-range European model continued to favor near-normal to warmer-than-normal conditions over all three regions for Nov. 7-25.

Are Higher Prices Here To Stay?

That said, intraday price volatility has shown no signs of slowing. The November Nymex contract plunged to a $5.595 intraday low before bouncing back midday as buying resumed.

With the November contract set to roll off the board in the coming days, wild price swings could continue.

The higher price environment has caught the attention of federal regulators, who expect Henry Hub prices to average $5.63 from November-February. In a recent report, the Federal Energy Regulatory Commission said although temperatures this winter are expected to be warmer than normal, prices are seen rising 103% from the winter 2020-2021 settled futures price.

“Even after the recent euphoria, there’s still upside,” the analysts said.

The Raymond James team noted that production, though higher than anemic 2020 levels, is not expected to grow much this year. Furthermore, what little growth has materialized has been largely offset by gains in liquefied natural gas export demand.

The third quarter earnings season has only begun to get underway, but independent index provider Alerian expects to see modest growth by the public exploration and production (E&P) companies in 2022. E&Ps need to continue to hold the line, Alerian said, to rebuild investor trust and establish a record of discipline and stronger returns – not to mention the potential ire from investors if plans deviate.

“Admittedly, discipline is easier when prices are lower,” said Alerian’s Stacey Morris, director of Research. “The recent improvement in commodity prices is likely increasing the temptation for public E&Ps to grow in today’s commodity price environment.”

At the same time, private E&Ps with no investor scrutiny should be more aggressive in increasing drilling activity. However, the impact for overall U.S. production tends to be more muted given the private producers’ smaller footprint.

A similar outlook was shared last week by midstream giant Kinder Morgan Inc. management. On a conference call to discuss quarterly earnings, CEO Steven Kean said producers are responding to the higher prices, but at a much slower pace than during previous periods of growth.

Spot gas prices were mixed Tuesday as heavy rains were heading for the Gulf Coast, easing temperatures and lowering demand for the remainder of the week.

With maintenance season underway, Gulf South Pipeline began pigging Tuesday on Index 129 from the Goodrich Compressor Station (CS) in Polk County to the Brazos CS in Fort Bend County, both in TX. The work is expected to last until Nov. 9.

Wood Mackenzie said four meters would be completely shut in, with a total cut of 64 MMcf/d intrastate interconnect receipts and a 77 MMcf/d cut of power plant deliveries. The consultancy said the cuts were based on day/day gas flows.

Additionally, Gulf South indicated there are potential restrictions for southbound and northbound gas.

On the other hand, several locations on the East Coast continued to strengthen amid severe weather in the regions. In the Northeast, the biggest gainer was Transco Zone 6 non-NY, where cash rose 10.5 cents to average $5.460 for Wednesday’s gas day.