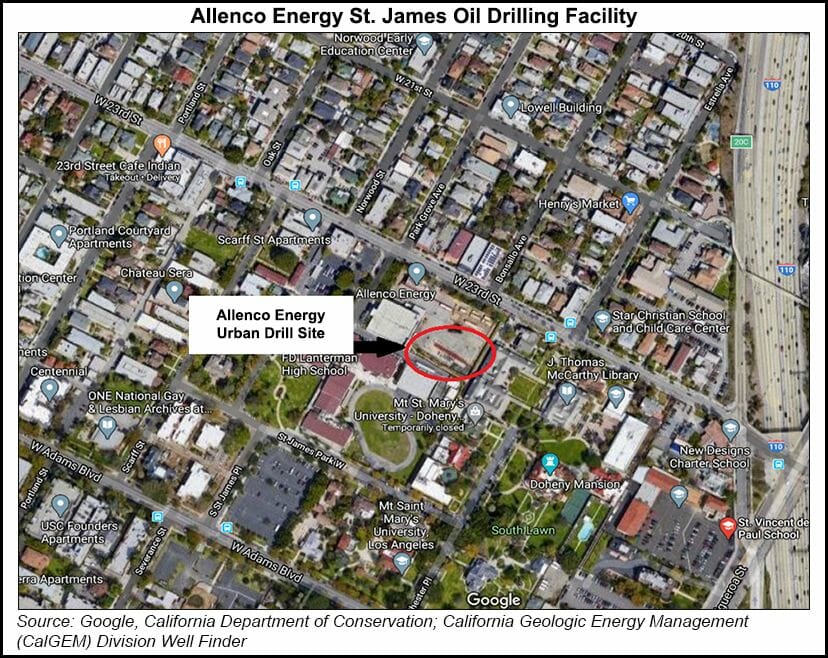 The wellsite has been under scrutiny by the Department of Conservation’s California Geologic Energy Management Division (CalGEM), which in March issued a remedial order mandating AllenCo develop a plan, depressurize and kill the 21 wells at its inoperable St. James oil drilling facility.

CalGEM director Uduak-Joe Ntuk said AllenCo was ordered to submit a compliance work plan but it had failed to comply, and its facility “continues to be a potential risk to public health, safety and the environment.”

Ntuk last year issued a letter to AllenCo verifying that the lease would be terminated because of a lack of production and payments to the city. LA City Attorney Mike Feuer said the complaint is aimed at CEO Clifford Allen and Vice President Tim Parker. Parker reportedly told the Los Angeles Times that the company was doing everything it could to comply with site abandonment requirements.

Regional air quality regulators began cracking down on LA exploration operators five years ago. The new charges against AllenCo include failing to comply with the CalGem order and having 21 nonoperational wells, which after one year should be abandoned or made operational.

“These sweeping new charges show that we won’t allow AllenCo to continue allegedly defying the law and disregarding its neighbors when it comes to environmental safety and health protections,” said Feuer. “This is a matter of environmental justice.”

LA Mayor Eric Garcetti said the city took “decisive action” last year to close the AllenCo site, and it continues to have “zero tolerance” for additional violations. “We must use every tool at our disposal to swiftly move away from dirty oil and toward our clean energy future.”

The Los Angeles Fire Department also has cited AllenCo for violations, Feuer said. The defendants “now face significant criminal penalties for their continued violations” and failure to comply with directives and orders.